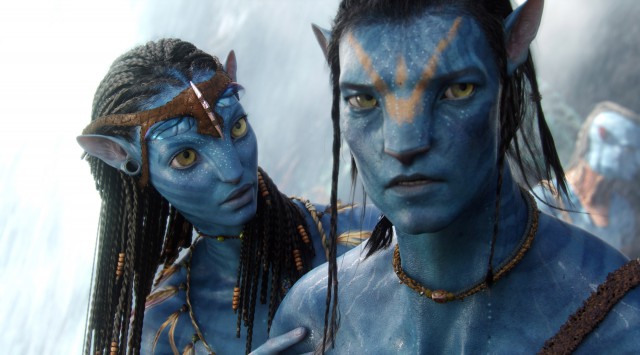 Avatar is a movie about manifest destiny and second thoughts, a
sweeping epic retelling of a classic theme about a soldier “going native” as he
learns that the enemy isn’t a faceless monster, but an intelligent race. The most
obvious parallel is Dances with Wolves, but director James Cameron has taken the basic storyline and created
a visual masterpiece that’s almost a perfect sci-fi film.

Avatar takes place
150 years in the future, on the far distant planet of Pandora, where everything
on the planet and all its inhabitants are connected through energy fields. The
local inhabitants, the Na’vi, are a race of ten-foot tall hunter/gatherers
modeled after Native American tribes. The Na’vi commune with nature, honor the
spirit of animals they kill and worship the great Home Tree.

The film follows Jake Sulley (Sam Worthington), a Marine
with a disabling spinal injury that’s left him wheelchair-bound. He replaces
his dead brother because he’s a perfect genetic match. Pandora is of great
interest not because it’s a lush, gorgeous planet but because it’s the primary
source of the fantastically valuable Unobtanium: if the planet has to be
destroyed to successfully mine this substance, well, so be it. Human need is
more important than the rights of the natives.

Jake is given an avatar, a Na’vi body that is a mix of Na’vi
and his own DNA, a ten-foot tall creature within which his consciousness
resides, a new, alien, but thrillingly functional body. His mission: to get the
Na’vi to relocate their home before the company destroys it to access the
richest vein of Unobtanium on the planet. Problem is, he meets Na’vi princess
Neytiri (Zoe Saldaña) and falls in love.

The Pandorian society that Cameron’s team invented is truly
alien in some aspects, while reassuringly human in others. For example, they
don’t have horses but instead each Na’vi warrior has a Banshee, a
pterodactyl-like flying creature. They symbiotically connect with their
Banshees via a nerve coupling that literally has the Na’vi plugging in their
ponytail. This same mechanism also lets the Na’vi connect directly with the
energy system — and collective memory — of the planet itself.

A cliché evil corporation called Resources Developmental
Administration runs the Pandorian mining efforts; lead by the two-dimensional
bean counter Parker Selfridge (Giovanni Ribisi). His right-hand man is the
tough-as-nails Colonel Miles Quaritch (Stephen Lang). Quaritch is the main
antagonist in the film, a marine who embodies the worst of human instincts and
behaviors. At one point he refers to an all-out war that he’s going to unleash
on the Na’vi by promising to “blast a crater in their racial memory.”

Weaver has a great role in this film, but it’s also a clear
reprise of her pivotal role as the tougher-than-the-alien Ellen Ripley in the Alien films (which is no surprise: James Cameron directed Aliens).

At almost three hours running time, Avatar is a long movie, but I never felt it drag when
watching the film: there’s a lot of story to cover and a whole lot of exterior
shots to stitch into the narrative.

That’s why it’s too bad that the storyline itself is so darn
predictable: Avatar is a great sci-fi film that could have been an amazing epic
story, but ends up being an astonishing technical achievement, all frosting and
precious little cake. Very worth seeing in a theater, in 3D, but it could have
truly been a crowning cinematic achievement with a bit more time and effort
devoted to story along the way.