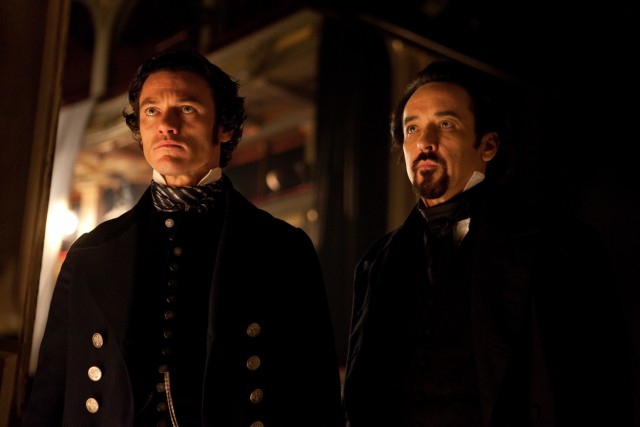 Edgar Allan Poe introduced his 1840s readership to a new kind of fiction: detective novels. In his dark, twisted and often macabre stories, criminals committed crimes and were brought to justice by an officer of the law. But while his stories, including “The Cask of Amontillado,” “‘The Murders in the Rue Morgue,” “The Pit and the Pendulum” and “The Raven,” enjoyed some level of popular success, Poe died a pauper.

A troubled soul and alcoholic, Poe no doubt instilled both admiration and dread in his Baltimore neighbors, and that’s where The Raven — with John Cusack as Poe — begins. One of Poe’s fans has taken an overly literal literary license and is murdering people in ways
inspired by Poe stories.

Enter brusque Inspector Fields (Luke Evans), who initially suspects Poe himself but, realizing he’s innocent,Â  reluctantly brings Poe into the investigation, even as the killer abducts Poe’s lovely fiancÃƒÂ©e Emily Hamilton (Alice Eve). Can Poe figure out the killer’s identity quickly enough to save her life?

It’s a well-worn narrative device, the crime author whose fan takes their work far too seriously, and the film’s setting, 1850’s Baltimore, with the help of some rather grisly set pieces, should have produced an enjoyable film. Unfortunately, it doesn’t, and The Raven suffers from too many plot holes, narrative hiccups, and a notably poor performance by Evans as a completely wooden inspector.

In one scene we’ll see a dozen police assisting in the investigation, then moments later Poe is mano-a-mano with the mysterious killer and the officers don’t follow or move to assist. Earlier Inspector Fields experiences the same odd “vanished policemen” phenomenon while running through the sewer lines.

Then there’s the question of why director James McTeigue decided to have such explicit and grisly murder scenes. The murder inspired by Poe’s “The Pit and the Pendulum” is particularly noteworthy as something that I’d expect to see in torture-porn like Hostel or Saw. It was unnecessary.

Still, I do enjoy a period drama and was smug that I’d figured out who the killer was, just to be surprised that I was wrong when all was revealed. Neat. The ending? Well, as with many films, it would have been far better had they finished the film about four minutes before the titles come up and left a bit of ambiguity about the ultimate demise of the killer.Â

And speaking of the ending, I found the titles oddly inappropriate for a film set in the mid 1850s: They would have fit much better closing out a modern action thriller like Battleship or GI Joe. It’s rare that titles intrude upon your consciousness, but when you do catch The Raven, I’m sure you’ll see what I mean in an instant.

So should you go see The Raven? If you’re a Cusack fan or want to see what it would look like to incorporate core elements from both Anonymous and Hostel into a script, perhaps. Otherwise I suggest you save your money: This will be a good DVD rental in a few months.