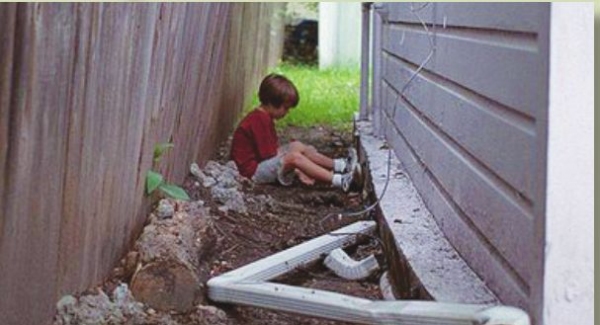 Since his 1991 debut, Slacker, writer/director Richard Linklater has quietly become the most reflective director in American cinema. In the documentary Double Play: Jack Benning and Richard Linklater (Gabe Klinger 2013), currently available via Video on Demand, he casually outlines his philosophical thesis: “I think ultimately the most interesting view out of a train is the back window. … You can’t really see out of the front of the train … but the back is yours, and that’s interesting because it’s what’s behind you, you know?”

Linklater’s latest work, Boyhood, which expands into a wider theatrical release this weekend, is a movie filmed entirely out the back window. In one of the most audacious approaches to storytelling, Linklater and company filmed the actors for a few days every year for 12 years. Starting in 2002 and culminating in 2013, Boyhood follows Mason (Ellar Coltrane), his sister Samantha (Linklater’s daughter Lorelei) and their two divorced parents (Ethan Hawke and Patricia Arquette) as they live, work and play their way across the state of Texas. Mom tries her hardest to raise the children, Dad delivers philosophical epithets every other weekend and Mason and Samantha observe with a wide-eyed wonder the adult world that surrounds them, and will one day consume them. Boyhood isn’t about the fear of growing up; it’s about the inevitability.

Those three questions lurk beneath the surface of entire film, though they are only explicitly asked late in the movie, with Mason as a high school student. The teacher (played by Tom McTigue) asks out of frustration, but they are the questions Mason, and the rest of us, must answer.

Boyhood is an ambitious production, and for that fact alone it deserves to be seen, but it is how Linklater and his editor, Sandra Adair, handle the year-to-year transitions that imbue the work with a sense of grace. The passing of time lacks title cards and obvious signposts, simply allowing each shot to flow into the next. Periods become commas and the passing of time is punctuated by music on the radio and the proliferation of pop culture: Dragonball Z, Harry Potter, Britney Spears, Victoria’s Secret, Oregon Trail, Game Boy, Iraq War, Xbox, Tamagotchi, Internet Porn, Vigor Boards, Funny or Die, Nintendo Wii, Obama, Facebook, Star Wars, Kurt Vonnegut, Lady Gaga, Beer Pong, FaceTime, etc. They not only mark time, they invoke a particular memory for each viewer, taking them back to a particular place, a particular emotion, a particular reference point in their life.

Often, we move through life unaware of what is happening while it happens, merely going through the motions of the day to day. Only after the fact can we gaze out the back window and identify the moments that held the greatest impact. With Boyhood, Linklater found those moments and wove them into a beautiful tapestry. You would be a damn fool to miss it.