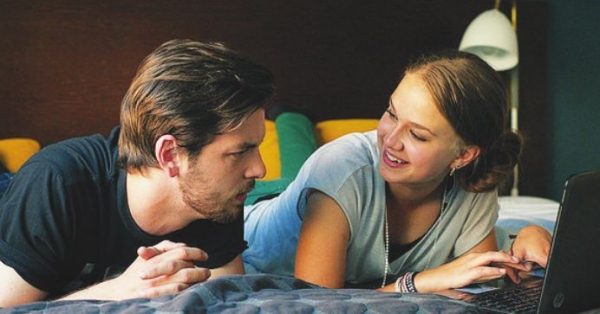 William (Gethin Anthony) is 28, loud, abrasive and generally unpleasant to be around. He yells, swears, leers, drinks too much and thinks too little. He is your typical obnoxious American abroad, both to the fine people of Demark and to his two traveling companions. Yet, maybe this isn’t William’s fault. Assholes are not born in a vacuum, and it doesn’t take a lot to see that William is a lost boy without a hint of a role model to grasp on to.

William’s father skipped out on him when he was a child, and it left behind a sizeable hole. After dear old Dad died, William discovered a letter — written in Danish — with an address. William can’t read the letter, but he has deduced that it is addressed to his grandfather, who might still be living in Copenhagen. With nothing to lose, William sets out to find his only remaining family member.

With help from a hotel waitress, Effy (Frederikke Dahl Hansen), William tracks down the address, which turns out to belong to a distant relative. There, William finds out that Gramps was a Danish Nazi, incarcerated for his involvement in World War II, which forced him to send his son to America. Things aren’t looking up.

However, none of this amounts to a hill of beans because Copenhagen becomes derailed with the appearance, and subsequent infatuation, of Effy. Young and pretty, Effy takes an interest in William and his quest, which he abandons in favor of more Freudian interests — that quickly sour when William finds out that Effy is 14 years old.

Though they are separated by 14 years, Effy is mature beyond her years, while William has the social skills of a teenager. Indeed, if she were his age (28), he would be 42 and their age gap would seem less so. In fact, for a mainstream Hollywood rom-com, that age difference would be par for the course. Jon Hamm could play William and Anna Kendrick could don an accent and play the cute and effervescent Effy, and no one would be the wiser. However, as Effy’s lawyers would no doubt attest, they are not 42 and 28 and this is not a typical Hollywood fare. Effy is 14 and William is in some serious trouble.

But, Copenhagen isn’t about a Lolita-type relationship either. The movie comes back around to touch on the idea of William’s absent father figures in an unfortunate attempt to find resolution and profundity, leaving the audience with a conclusion — including a completely unearned final shot — that is decidedly false.

Copenhagen is a troubled project with many problems, but therein lie its merits. A lot can be learned from deciphering a bad movie, and that is precisely what we can do at The Boedecker Theater on Jan. 8 when this reporter will host a talkback discussion following the 7 p.m. screening.