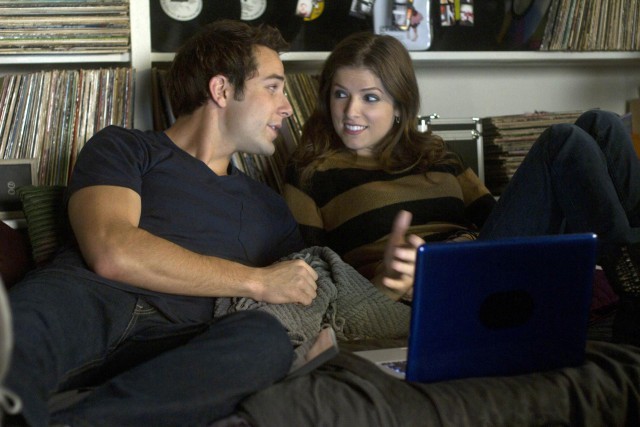 At the point where the fist pump from The Breakfast Club becomes a plot point, shortly after a near-mute Asian girl who ate her own twin in the womb makes snow angels in another girl’s vomit, Pitch Perfect moves from “potential cult classic” to “recommended for any human who likes funny.” Toss in the nonchalant itty-bitty beauty of Anna Kendrick, and it doesn’t matter how many clichÃ©s you overstuff this cinematic Oreo with, it’s damn good eating.

If you’re someone who feels watching an episode of Glee is a synonym for waterboarding, you’re in luck. Yes, Kay Cannon’s screenplay, adapted from Mickey Rapkin’s book, is about competitive singing. But nobody treats performing a medley of Journey like it’s equivalent to the struggle for human rights, and the film strives to find the bawdy boundaries of the PG-13 rating. Short of director Jason Moore pausing for a disclaimer that nobody is taking this crap seriously, it couldn’t be any clearer that Pitch Perfect has zero concern for anything other than tweaking funny bones.

Kendrick plays Beca, a college freshman who may be the gentlest “rebel” in history, as her “alternative streak” manifests with small spiky earrings and black fingernail polish. She wants to move to Los Angeles and produce music, but her stuffy professor dad says she has to give college the old, um, college try first. This includes picking an extracurricular activity. One day, while singing to herself in a communal shower, Beca is brazenly confronted by a buck-nekkid competitor from the International Championship of Collegiate A Cappella and persuaded in the presence of her exposed genitals to try out.

The all-female group, the Barden Bellas, need a shot at redemption after Aubrey (Anna Camp) projectile-vomited on the final stage last year. She and Chloe (Brittany Snow) are the only two holdovers after puke-gate, so they reluctantly take on a squad of outcasts notably led by “Fat Amy” (Rebel Wilson). Throw in a rival all-male group led by a grown man named Bumper (Adam DeVine) and an aw-shucks love interest for Beca, Jesse (Skylar Astin), and you have a formula movie that could only be saved by hilarious admissions of arson and Elizabeth Banks and John Michael Higgins doing vile color commentary for a seemingly nonexistent media outlet.

A quick perusal of bios reveals why this factory-assembled film hits so hard: Cannon wrote for 30 Rock and New Girl, and Moore directed Avenue Q on Broadway. The former explains the deliriously daffy set pieces, and the latter explains why the songs don’t suck. While the breakout star will unquestionably be Wilson, Kendrick kicks ass in every key. Pitch Perfect is unoriginal, has hackneyed characters and plot and is virtually devoid of surprises, and you’ll likely never notice.

A quick note: Alleged comedian Adam Carolla and hack Hollywood reporter Nikki Finke have resurrected the blatantly misogynistic discussion about whether women can be funny, especially attractive ones. With Wilson doing broad comedy and physical gags, Kendrick hammering out organic and witty dialogue and Banks crushing obvious improvisation, Pitch Perfect should set that stupidity to rest. Indeed, this movie is written by stars and is intended for female audiences, but you should pity any shortsighted males who miss out.

—This review first appeared in The Reader of Omaha, Neb.