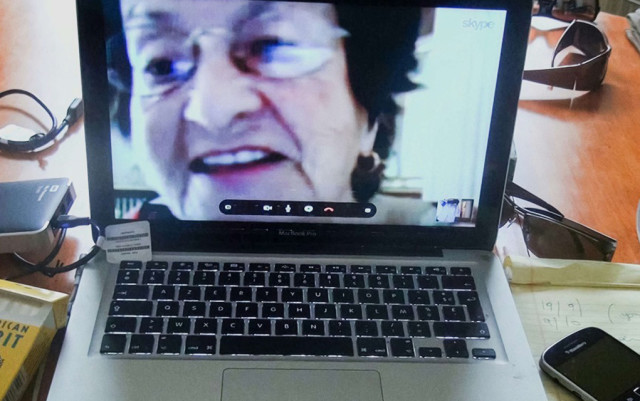 For the godfather of narrative cinema, D.W. Griffith, moving pictures “moved.” As he said in 1944, “What the modern movie lacks is beauty, the beauty of the moving wind in the trees.” For Griffith — and the vast majority of storytellers who use the cinematic medium — that wind creates life, energy and beauty for the viewers. But for the great Belgian director, Chantal Ackerman, that movement creates a Zen-like stillness.

It’s possible that Ackerman had Griffith’s aphorism in mind when she decided to open her latest, and last, feature film, No Home Movie, with a shot of a tree blowing in the wind. Or it’s possible that Ackerman sees herself as that tree, forever beating against forces beyond her control. Either way, the four-minute, unbroken shot of a tree whipping in the wind sets the table perfectly for Ackerman’s swan song.

No Home Movie is a documentary about the director’s mother, Natalia, an aging octogenarian and Auschwitz survivor. Ackerman converses with her mother and observes her daily routine while simultaneously questioning her own place, or lack thereof, in this world. Long stretches of landscape photography suggest that Ackerman no longer feels connected to any place or anything.

All of this Ackerman captures on consumer cameras. Her story requires no flashy photography, no dazzling aesthetics. Ackerman’s unencumbered style is naked and inviting, beckoning the audience to observe passively alongside her. As the French critic and filmmaker, Jean-Luc Godard put it, “The history of cinema is the story of men looking at women.” Ackerman spent her career turning Godard’s words on their ear by not only watching women, but by not objectifying them — a simple shot of two women standing on the street, possibly waiting for a bus to arrive, attracts as much attention from Ackerman as does her own mother. The key to Ackerman’s work is in the duration of her shots. The longer Ackerman allows shots to unfold, the longer the context of the frame is allowed to develop. And in many cases, that context can be confining.

Natalia, who was ill during the shooting of No Home Movie, died before it was complete. She was 86. In these last months of her mother’s life, Ackerman compiled more than 40 hours of footage, which she paired down to the movie’s final 115 minute running time. Two months after No Home Movie premiered at last year’s Locarno Film Festival in Switzerland, Ackerman took her own life. She was 65.

Ackerman was 25 years old when her acclaimed masterpiece, Jeanne Dielman, 23 Commerce Quay, 1080 Brussels premiered at the 1975 Cannes Film Festival. Employing long takes and static shots, Dielman was a revolutionary work, one that showed the private life of the housewife in a manner unseen at the cinema. The same could be said of Ackerman’s final film, where the personal conversation between Ackerman and her mother echoes one that Ackerman had with Dielman. For 40 years, Ackerman conducted private conversations in the most public of spaces — the cinema. And the cinema is where Ackerman — like Griffith and Godard — made her home. No home movie? They’re all home movies.