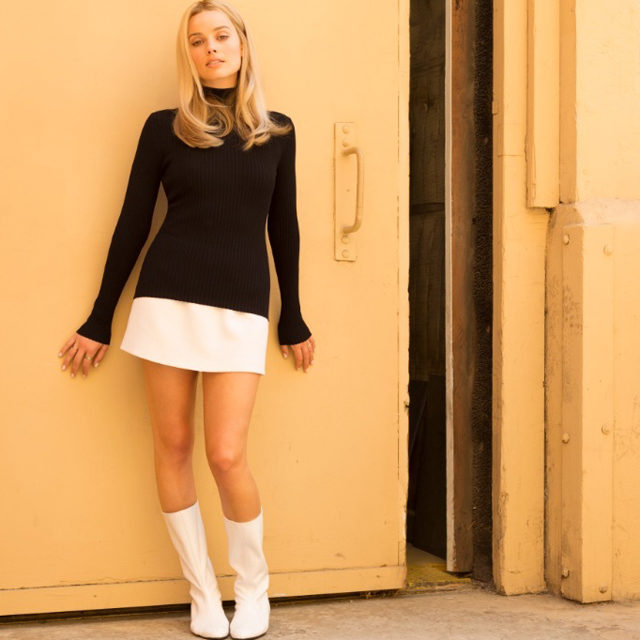 There are two moments in Once Upon a Time… In Hollywood that take your breath away. The first is visual: A series of neon signs flickering on in the setting Los Angeles sun on Friday, Aug. 8, 1969. The second takes places a few hours later and is aural: The sound of Sharon Tate’s voice, unafraid and undead, coming through a gate intercom speaker.

As the title implies, writer/director Quentin Tarantino’s film is a fairy tale, one where Tate (Margo Robbie, magnificent) survives the final reel. This revision shouldn’t come as too much of a shock for those who have seen Tarantino’s previous historical fictions. In Inglorious Basterds, Jewish-American soldiers and a Jewish theater owner exact their bloody retribution on Adolf Hitler. In Django Unchained, more than one slave master finds himself on the other end of the whip.

But the violence of Basterds and Django had a gleeful catharsis to it. Through the power of cinema, literally and metaphorically, Tarantino allowed history’s victims the upper hand. That’s not exactly the case with Tate. She was not the target of the Manson family’s ire; she and her houseguests just happened to be living in the former home of Terry Melcher when Charles Manson told Tex Watson, Susan Atkins and Patricia Krenwinkel to kill everyone living there. And, “to make it look witchy.”

And they did. In the midnight hours of Aug. 9, 1969, Watson and Atkins stabbed Sharon Tate and her unborn child to death. She was 26.

Not so in Once Upon a Time. Here, Watson, Atkins and Krenwinkel enter a different house on Cielo Drive and find a different fate. One where the only thing witchy is garbage spewing from Watson’s mouth and the sinister sounds of Vanilla Fudge blaring from the radio. It’s not bloodless — fairy tales rarely are — but it is nowhere near as horrific as reality.

Coincidentally enough, another movie this summer took a similar approach and presented another tale where the dead need not die: Yesterday. Here, a struggling musician, Jack (Himesh Patel), is injured in an accident and wakes up in an alternate reality, one where only he remembers The Beatles.

It’s a fun setup, and writer Richard Curtis and director Danny Boyle mine it for all it’s worth. But the movie’s real punch comes when Jack meets John Lennon (Robert Carlyle), who isn’t a singer/songwriter; he’s a fisherman living on the coast. Why? Because in a world without The Beatles, Lennon is just another Liverpudlian laborer. And why would Mark David Chapman want to go and gun down an average fisher?

Seeing Lennon alive and well as a 79-year-old man is a beautiful thing. Hearing Tate’s voice through a gate intercom isn’t just beautiful, it’s devastating. Reality was cruel to these two, but cinema need not be. What a humane present to give in a summer full of inhumanity. If only we could make movies about them all.

ON THE BILL: Once Upon a Time… In Hollywood and Yesterday are both in wide release.