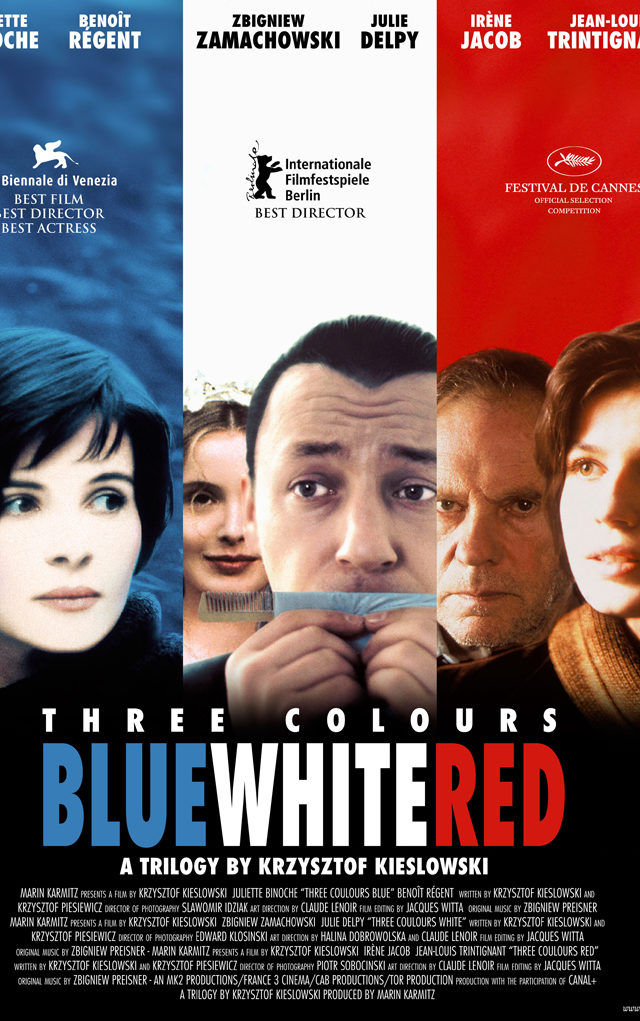 The colors belong to the French flag, the corresponding ideas to the Republic: blue, white and red — liberty, equality and fraternity. For France, these colors, these ideas, are political. They guide the nation the way Jefferson’s decree, “We hold these truths to be self-evident: That all men are created equal,” has guided America. But though they are born of politics, they are human at their core, and when artists set their minds to exploring these ideas, masterpieces are born.

Blue, White, and Red are those masterpieces. Known collectively as the Three Colors trilogy, they explore the three governing ideas behind the French Republic, celebrating the country’s 1989 bicentennial. But considering they were made by the Polish filmmaker Krzysztof Kieslowski and the team behind Dekalog, they also address the fall of the Berlin Wall and the collapse of Eastern European Communism. Set in France, Poland and Switzerland, Three Colors mark a major change for Europe, particularly the formation of the European Union.

While each film can stand on its own, they are best experienced in close succession. Blue opens the trilogy with a series of abstract images: a car tire speeding along the road, a candy wrapper blowing in the wind and a fatal car crash that sets the events in motion. Red resolves these abstractions by closing the trilogy with a miraculous curtain call. In between these images are loss, love, lust, bungee jumpers, bird shit, comedy, deportation, confusion, frustration, impotence, missed connections, puppies and a recycling bin. Connecting them all are simple and daily epiphanies, the stuff that makes life worth living.

In Blue, Julie (Juliette Binoche) survives the fatal car crash, but her husband and child do not. A morbid twist on the notion of liberty, Julie decides to live her life free of attachments. But the world comes creeping back in and Julie must finish her husband’s musical composition, a song to celebrate the unification of Europe.

While Blue’s Julie is soaked in sorrow, White’s Karol (Zbigniew Zamachowski) seeks revenge against his wife (Julie Delpy), whom he still loves, in an attempt to restore equality. His task is no easier than Julie’s as Karol must navigate an ever-changing Poland full of odd connections and crossed paths.

These connections multiply even more in Red where a young model, Valentine (Irène Jacob) crosses paths with a reclusive and cankerous retired judge (Jean-Louis Trintignant) who is spying on his neighbors. How does this installment express fraternity? That is worth discovering on your own.

Disparate as they may seem, all three films work masterfully together. They are united by Kieslowski and collaborator Krzysztof Piesiewicz’s notion that if you look past the veneer of politics, the human will shine. And these Three Colors don’t just shine, they radiate.

Thanks to the International Film Series, here is your chance to see these monumental works as they were intended, beautiful and bold and projected from 35mm prints. As an added bonus, University of Colorado film professor, Dr. Suranjan Ganguly, will introduce all three films.