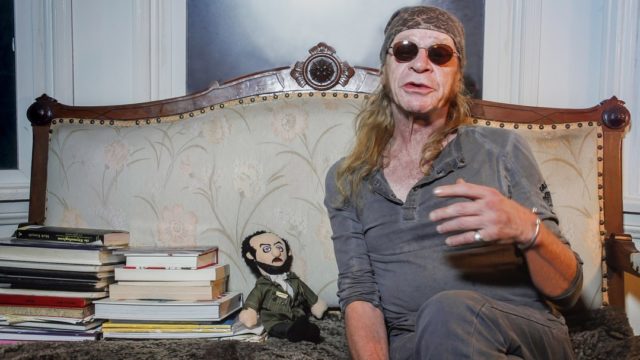 Like most love stories, this one begins at the movies. London, 1971: A young actor goes to see the latest release, A Clockwork Orange, and is transfixed. The garish colors, the violence, the sex, the terror, Malcolm McDowell’s theatrical performance; the young actor falls for it all. The credits roll: Produced and directed by Stanley Kubrick. The young actor turns to his friend and says, “I’m going to work for that man.” His name is Leon Vitali, he is 23 years old, and his fate is sealed.

Four years later, Vitali auditioned for Kubrick’s next film, Barry Lyndon, and was hired for the small, walk-on role of Lord Bullingdon. Giddy with excitement, Vitali prepared for the role with a level of devotion only Kubrick could have appreciated. It paid off. Kubrick continued to expand Lord Bullingdon’s role, eventually making him one of the film’s central characters, providing Vitali with the perfect launching pad for a long and illustrious career. But Vitali had little interest in working for anyone else, and when Kubrick called to see if Vitali wanted to help out behind the camera on his next picture, The Shining, Vitali walked away from his acting career and became Kubrick’s right-hand man.

It is impossible to convey the breadth of Vitali’s contributions in a 500-word column; he simply did whatever Kubrick asked. And he did it with a perfection befitting of an obsessive perfectionist. Though this was a severe drain on Vitali’s physical and mental health, as well as his bank account — there seems to be some question as to how much Kubrick compensated Vitali — there is little bitterness or remorse in Vitali’s voice. From The Shining to Kubrick’s death in 1999, Vitali was there for every production meeting, every shot, every cut, every promotional photo and international dub. As Vitali says, “I’m at the service of him because he’s at the service of his movie.”

Vitali is still at it, day in and day out. Preserving, restoring and circulating Kubrick’s films is a full-time profession, and if there is any resentment or hesitation in Vitali’s mind about how he chose to spend his life, he hides it well. Filmworker’s director, Tony Zierra, doesn’t push this point, he simply lets Vitali and his two children, now adults, speak for themselves.

Zierra is in awe of Vitali, and with good reason. Anyone who watches a Kubrick film owes Vitali a debt of gratitude. Without Vitali’s tireless efforts we would not have the prints in the condition they are, nor would we have the plethora of archival material to study. Vitali may have sacrificed himself for Kubrick, but we, the moviegoers, are the ones who reap the benefits.