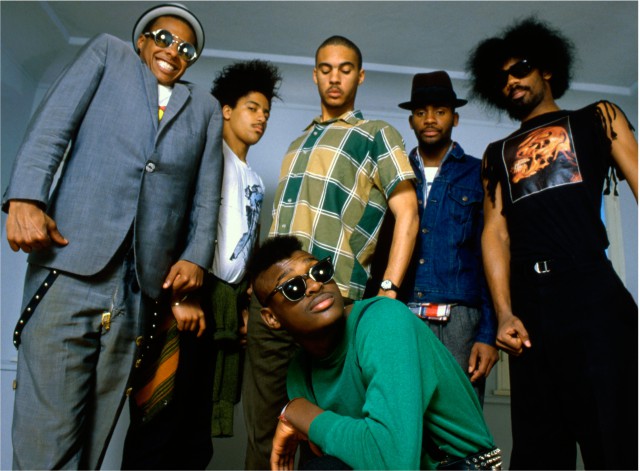 Everyday Sunshine tells the sometimes tragic, often-funny story of Fishbone, a band from Los Angeles that influenced many, yet never found a way to mainstream success.

Fishbone is one of those bands that doesn’t belong to one particular genre, prompting critics and listeners to over-hyphenate when describing the band. Ska, punk, metal, reggae and funk all found their way into the Fishbone stew, which made the group members somewhat outsiders as the band paid its dues in South Central Los Angeles as hip-hop was becoming a cultural phenomenon.

The members of Fishbone met in 1979, when the city of Los Angeles began integrating public schools by busing students from the poor, predominantly black neighborhoods of South Central L.A. into the more affluent neighborhood schools of the San Fernando Valley. Bassist Norwood Fisher and his brother, drummer Philip “Fish” Fisher, were jamming and trying to start a band at their new middle school. Enter Angelo Moore, raised in a white neighborhood by his Jehovah’s Witness mother. He begged Norwood to let him in the band, and though Moore always smiled and was, as Norwood says in the documentary, “devoid of hood sense,” Norwood let him join the band.

“We listened to all kinds of music, period, and punk rock was one of those kinds of music,” Norwood tells Boulder Weekly. “Punk rock was a sound that emerged as we were teenagers, so the way the media looked at punk rock just engaged our curiosity as youths. … Punk rock scared the fuck out of old people, man.”

Just as the band was poised to break into the mainstream, prompted by promising events such as being signed by Columbia Records, an appearance on Saturday Night Live and a music video directed by Spike Lee, a bizarre series of events sucked the wind out of the band’s sails, leaving band members living “hand-to-mouth,” watching the bands they influenced, such as No Doubt, Red Hot Chili Peppers and Primus, achieve spectacular success.

Narrated by Laurence Fishburne, Everyday Sunshine tells that story, including when, during the few years the documentary was shot, Moore moved in with his mother. When directors Chris Metzler and Lev Anderson initially approached the band, then anchored by original members Norwood Fisher and Moore, with the idea to do the documentary, the band was skeptical — they weren’t dead yet, so why film a documentary?

“My initial reaction was that we can’t put a cap on the story because we’re still writing it,” Fisher tells Boulder Weekly. “To be honest, the band was not in a very good place, and I felt we were on a curve going up, and I wanted to finish that before we started telling the story. … I think it’s killer, overall. At the end of the day, it’s an honest piece.”

Directors Chris Metzler and Lev Anderson deftly tell the band’s story through a series of incredibly candid interviews with current and former members, interviews with bands influenced by the group, live concert footage and some vintage home videos. At times, they use more experimental techniques, such as Fat Albert style animation and creepy oil paintings to tell facets of the story.

The strangest and most tragic part of the band’s story revolves around original guitarist Kendall Jones, who left the band in 1993 shortly after his mother died. The other band members say that Jones’ father, a religious nut who supposedly had multiple wives, brainwashed Jones into coming to live with him.

Fisher, worried about the welfare of his friend, tried to stage an intervention and force Jones into treatment, a debacle that led to kidnapping charges and a public trial. Fisher and everyone else involved, including other band members and Jones’ brothers, were eventually acquitted, but no one in the band saw Jones again for more than a decade.

Then, out of nowhere, Jones appeared at a show in front of the film crew. The reunion makes for one of the most touching scenes in the documentary.

“It was one of those weird situations where as a filmmaker, you wonder how much your presence affects things,” Metzler says.

The crew tried to ask Jones whether he was still involved with his father’s group, and Jones avoided the question. “The specifics are a little difficult to ascertain. Kendall attended a screening of the film a couple weeks ago … and someone, during the Q-and-A, asked him what did he learn from the experience,” Metzler says. “He said it’s OK to leave a band for drugs and alcohol, but it’s not OK to leave the band for Jesus.”

The documentary is a captivating look at a group that paid the price for demanding total creative control of its music. No matter whether you’ve heard of Fishbone, which plays Cervantes’ Other Side on Nov. 17, the documentary is inspiring and engrossing, and it is a captivating, beautifully told look into the struggles of perpetual outsiders trying to make it in the music business without compromising their identities.