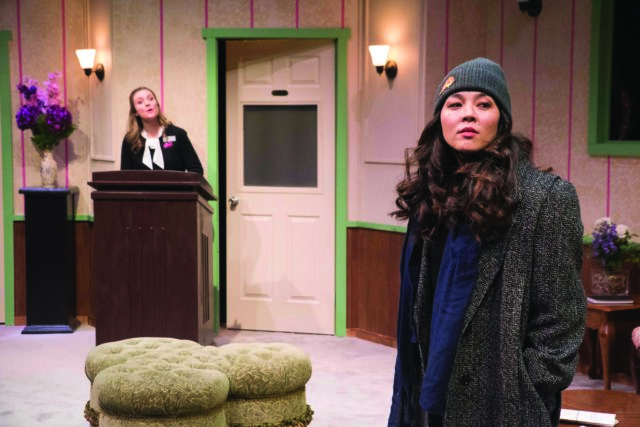 Coming back to in-person performance after a nearly two-year hiatus, the artistic team of Butterfly Effect Theatre of Colorado (BETC) wanted to produce a warm play, something big-hearted.

So they chose a script about death.

Save for one Fitchwood—the last Fitchwood standing—Sienna (played by Erika Mori), who grew up in Chicago and never knew her extended family in the sleepy town of Blissfield, Indiana. Still, Sienna drives to Blissfield at the behest of a funeral director named Millie (Anastasia Davidson), not knowing what awaits her when she arrives.

“In choosing comedies, I’ll come across plays where I’m like, oh, this is quite funny, but it just doesn’t have enough teeth for me, or enough guts to draw me in on a deeper level than that,” says BETC producing artistic director Stephen Weitz. “But this play, I thought, really had that great mix of laugh-out-loud stuff, rampant silliness, but also a lot of really nuanced exploration of some important things that are happening around us.”

Defensive and self-absorbed, Sienna loathes small towns like Blissfield and everything she believes they embody: conservative values, lack of diversity, a dearth of entertainment. Millie is her foil: effervescent and eager to please. But both yearn for more than they have.

“These kind of intractable divides that we feel in our lives in our country, I think the play really picks at that scab without being didactic, without being overly prescriptive, but really getting at what are the differences between red state people and blue state people, or country people and city people, or whatever divides you want to point to,” Weitz says. “But the things that these two characters bond over are the challenges with their families, the uncertainties about where their lives are going are—things that we all share.”

The single-set, two-hander script goes down easy in a tidy 90 minutes. Set designer Tina Anderson’s seafoam-and-mauve funeral home (described as “dated, but not cheap” in the book) provides the type of aggressively pleasant backdrop required of a place that endlessly bears witness to grief. In modest but stylish attire (thanks to costume designer Madison Booth in her first work with BETC), Davidson giggles and grins her way into Millie’s earnest Midwestern politeness, while a combat boot-clad Mori deftly summons the kind of guarded behavior that only comes from deep insecurity.

“They really put their stamp on the play,” Weitz says of Davidson and Mori. “By having that opportunity to workshop with [Pfeffinger], their voices kind of become the grounding voices of the characters moving forward, which is, I think, an exciting opportunity for them. The play now will reflect their input and spirit as it moves forward into other productions and other iterations and other places.”

Pfeffinger’s script for Fourteen Funerals won a grant last year from BETC’s Generations program for new play development, open to playwrights with at least one child 18 years old or younger. The award comes with a child care stipend, a cash reward and a week-long residency

“This was our ninth cycle of the Generations competition, which is specifically designed to help artists develop their work at a time when it can be challenging to find the time to do that,” Weitz says. “When we picked Fourteen Funerals, that was the first time we’ve picked a play with the intention of taking it essentially straight into production.”

Pfeffinger spent a week in Boulder in November helping the cast and crew shape the final production, which will run through March 5.

“It was a really daunting time to try and put on a play after a long time off, and it required a lot of extra effort in terms of testing and protocols and rehearsals and people being really cautious in their personal lives outside of rehearsal and things like that,” Weitz says. “We did have COVID scares, we did a whole week of rehearsals via Zoom. So it wasn’t the usual process, and everybody from the cast and crew to the designers and our staff really committed to that process with such a great attitude and a generous spirit. I don’t think we could have pulled it off without that.”

While not masquerading as a philosophical work, Fourteen Funerals does provide a space to examine the existential: What role does death play in our lives? It brings to mind a quote from Socrates: Death may be the greatest of all human blessings.

Through his life, Socrates argued happiness is obtainable through the search for wisdom. Dedicated to his word, he discussed philosophy right up to the moments before he took the lethal hemlock.

In the middle of Fourteen Funerals, Sienna argues that life in a small town offers little in the way of growth, that you can never achieve more than “medium happy” in a small town.

“Medium happy is more than most people get,” Millie counters.

Socrates might argue that all you need to be happy is the desire to seek out wisdom, to grow, no matter the conditions you’re in—he was in prison when he drank the poison that stopped his heart. Before he took his last breath, Socrates described death as a release of the soul from the body. But it’s more than that. Death is a blessing, not because it ends our pain, but because it reminds us to live.