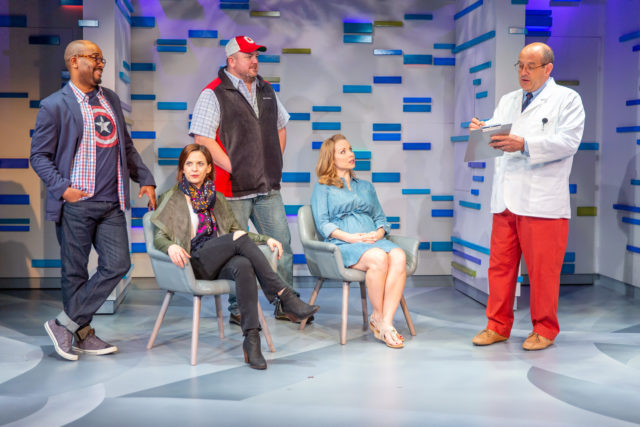 I’ve got good news and bad news for all the dyed in the wool, “red ’til I’m dead!” conservatives and “true blue!” liberals out there. The good news is that, whichever side you’re on, Human Error will stuff your ballot box with laughs at the expense of your sworn political enemy. The bad news is that if you identify that strongly with the left or the right in America in 2018, you’re part of the problem, not the solution.

Wake up and smell the pork barrel! The days when the Republicans stood for small government and laissez-faire economics while the Democrats stood for expanding social programs via tax-and-spend ended with parachute pants. These days, both parties want more of your hard-earned money every year; they just want to throw it at different pet projects. The ’Pubs toss money at the military-industrial complex and big business, their largest campaign donors. The Dems keep their donors fat and happy, too, while expanding entitlements with wildly varying degrees of success. Fiscally speaking, they’re the same damn party!

Which means the whole right versus left thing is a spurious sideshow whose only purpose is to distract The People and keep the ruling class (i.e., the professional politicians and the super wealthy who line their pockets) in power. If the 99 percent is fooled into taking sides based on a handful of artificial “wedge” issues like abortion, guns and capital punishment, they will fight among themselves rather than unite against the 1 percent and the utterly corrupt and irretrievably broken system that keeps them in power.

Human Error does a star-spangled, fireworks-and-bunting, spectacular job of finding the humor in the fallacious Fox News versus NPR conflict. Two couples, the Christian, McMansion-dwelling, lily-white Jim and Heather (Joe Coots and Marissa McGowan) and the atheist, city folk, interracial Keenan and Madelyn (Larry Bates and Kimberly Gilbert), are attempting to have babies via artificial insemination.  Due to a “clerical error” committed at the clinic run by Dr. Hoskins (Wayne Kennedy), the Clinton embryo ends up in the Bush belly.

The couples meet, and Heather — with hubby Jim’s support — decides to act as the surrogate mother for Keenan and Madelyn’s child. That sets the stage both literally and figuratively for nine months of mismatched, fish-out-of-water episodes among these politically polarized people. Keenan goes from being reflexively, deathly afraid of guns to enjoying hunting trips with Jim. Heather comes to understand that yoga is not a threat to Jesus; it’s simply a healthy stress-reducer and a way to bond with Madelyn. Blue collar Jim realizes that white collar Keenan isn’t from another planet. And Madelyn, the most socio-politically extreme of the bunch, learns the value of at least a modicum of tolerance for beliefs different from her own.

This world premiere marks the first time the Denver Center Theatre Company has presented a regular season production in the Garner Galleria Theatre, which explains the cognitive dissonance I experienced when I realized that Human Error was a play and not a musical. The Garner traditionally hosts only musical theater, and I’m happy to report that its cabaret atmosphere is just as well-suited to non-musical performances. The one allowance made was the exclusion of the standard table service during the show, and I for one applaud the Denver Center for making that distraction-minimizing choice.

Speaking of applause, the cast of Human Error was showered with it during the curtain call and deservedly so. Each actor excellently embodies his or her stereotype without ever stepping over the line into cartoonish territory. More than that, the relationships they develop with their same-sex opposite number feel far more genuine than one would expect in a farcical comedy of this sort.

BDT Stage’s master of mirth, Wayne Kennedy, only gets a handful of scenes, and as anyone who’s had the pleasure of watching him work his theatrical magic over the years in Boulder will expect, he makes more than the most of them. Wayne’s bumbling, befuddled fertility doctor earned the loudest and longest laughs in a play filled with hilarity. His Denver Center debut should definitely earn him return invitations to DCPA’s various stages.

On the Bill: Human Error. Denver Center for the Performing Arts, 1400 Curtis St., Denver, www.denvercenter.org, through June 24. Tickets $30 and up.