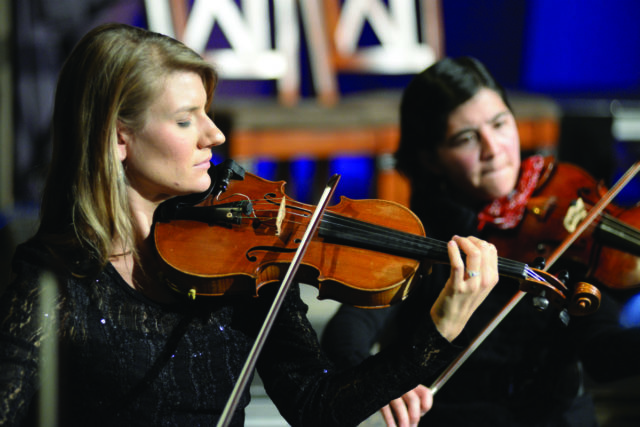 Antonín Dvořák has written some of the most, and least, familiar works in the classical music repertoire.

On the one hand are the “New World” Symphony, the Cello Concerto — both written in the United States — and a handful of other pieces that are immediately recognizable to most concertgoers. And on the other hand are many pieces almost never heard outside of the composer’s native Bohemia, including most of Dvořák’s operas and almost all of his sacred vocal music.

Among the latter is the Stabat Mater, a large-scale religious cantata for chorus, orchestra and four soloists, based on the 13th-century sacred hymn text “Stabat mater dolorosa” (Grieving mother, standing at the cross). Now the Boulder Symphony and the Boulder Chorale have joined forces to bring Boulder audiences a piece that conductor Vicki Burrichter calls “an underrated masterpiece.”

“I said I have a piece that I’ve long wanted to do,” Burrichter says. “And he said ‘OK, let’s do it!’” Since Hughes has another concert on the same date — conducting Mahler’s Fifth Symphony with the Arapahoe Philharmonic — Burrichter has led rehearsals of the Boulder Symphony and Boulder Chorale and will conduct both concerts.

The program includes one work in addition to the Stabat Mater: J.S. Bach’s Concerto for oboe, violin and strings will feature members of the Boulder Symphony, concertmaster Keynes Chen and principal oboist Ingrid Anderson. Chen will lead the performance.

The Stabat Mater is clearly a text of grief, portraying Mary mourning Jesus at the crucifixion. Dvořák wrote his Stabat Mater at a time of great mourning in his life as well: It was written immediately following the deaths of his three children in the first four years of his marriage.

“How can any of us even begin to understand that kind of loss?” Burrichter says. “That’s incomprehensible grief to most people. The text revolves around Mary [saying], ‘Let me feel feel your pain as my pain,’ And at the end there’s the ‘Paradisum, Gloria,’ which is the rise of the soul into heaven, and it ends on a hopeful and transcendent note.”

“One of the things that’s so brilliant about that movement, and the 10th movement, is that Dvořák managed to capture that sobbing feeling of grief in the body, through these ebbs and flows of dynamics, and the stuttering almost of the tenors, almost like you can’t speak when you’re in that kind of grief. At the same time, it’s such a transcendent text and, in the end, so cathartic.”

There are two challenges for the choir, Burrichter says. One is that, unlike many cantatas and Requiem settings, the text is not familiar to most choral singers. “There was a lot of having to go through the text and talk about pronunciation, which is not often the case,” she says.

The second challenge is to express the grief and transcendence that are found in the text and music. “They have to be willing to go there, and enter into that state of grief, and take that journey [to] transcendence” she says. “That is the sublime part of this piece.”

In addition to the outer movements and other choral sections, the Stabat Mater includes a number of virtuoso arias and duets for soloists that are almost operatic in nature. “There’s some absolutely stunning work for the soloists,” Burrichter says. “We have phenomenal soloists — some of the best soloists I’ve worked with.”

As little known as the Stabat Mater may be, people are won over when they hear it. It was the last piece recorded by the great choral conductor Robert Shaw, who said he wished he had learned the piece sooner.

Burrichter says that with the Boulder Chorale, “when it comes to rehearsal, people are saying, ‘Oh my god, this is so gorgeous, this is so fun!’ And that makes it easy for them to learn.”

She hopes audiences will embrace the piece in the same way. “Take the leap and experience this piece,” she says. “If you love the choral masterworks and you haven’t experienced the Stabat Mater, you’re going to be thrilled.”