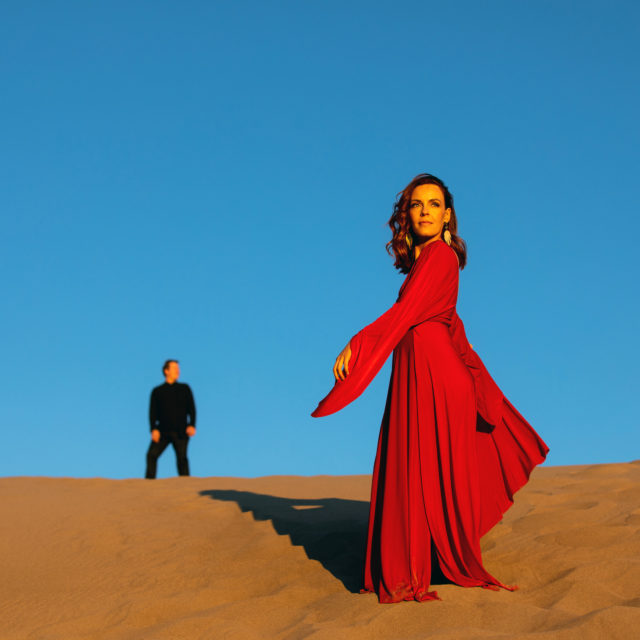 Some years ago, pianist Mina Gajić found herself at Maison Erard in Amsterdam, staring at a teal 1835 Erard grand piano. She was enamored with the French-made instrument, but it wasn’t for sale.

“It was a very long conversation to bring that piano back to the States,” Gajić says. “Because of its unique appearance, that piano was supposed to be the one [shop owner] Fritz [Janmaat] would keep as a crown jewel of his career,” which, among other notable projects, included restoring a piano played by Franz Listz.

Gajić decided that her time in Amsterdam “would be spent with this piano.”

Today, accompanied by her husband, violinist Zachary Carretín, you can hear Gajić play sonatas by Franz Schubert on this rare Erard piano on their new album, BOUNDLESS, released on March 27.

These sonatas (often called sonatinas for their diminutive length), composed specifically for violin and piano, were written between March 1816 and August 1817, when Schubert was only 20 years old, though they wouldn’t be released until several years after his death, in 1936. The young composer was a trailblazer of Romantic era music, creating expressive harmonies and melodies that conveyed the joyous intellectual and artistic growth European society was enjoying at the time.

Carretín points out that Lord Byron wrote Manfred — a dramatic exploration of human responsibility — during the same years Schubert composed these sonatas.

“You find this humanism and self-exploration and looking inward into the nature of consciousness, and this is really the beginning of Romanticism,” Carretín says. “These pieces are so interesting because they’re right at the cusp of the very refined Classical era and the beginning of this raw Romanticism.

“The first sonatina is an homage to classical style. The second is Schubert exploring Romanticism that he hadn’t explored in instrumentals yet. The third, he finds a way to bring them together; there’s balance, form, proportion of Classical ideas with the storm and stress qualities, the new way of looking at the world that will open up in the world of Romanticism.”

Gajić has built her career around presenting music on historical instruments.

“As pianists we usually go from hall to hall, from studio to a recital hall or concert hall or our home, changing instruments every time we do something professionally,” she says. “I really was a little envious of other instrumentalists, including singers, who always carry their musical voices wherever they go. Violinists will have a voice with both interpretation in how they play and with the instrument itself. I fell in love with the pursuit of finding historical pianos in needing to find a voice in my own instrument, not just my interpretation.”

The Erard she plays on BOUNDLESS was built the year before Schubert’s sonatas were published.

“Shutbert sounds so wonderful on this Erard,” she says. “It’s like a time capsule. … It gives a historical inkling into what this would have sounded like when these pieces were published. … Imagine going to a store, buying this sheet music and then bringing it home, or to the salon, and playing it on a piano from the same era.”

While a modern piano is cross-strung, Gajić’s Erard is parallel-strung, with the dampers beneath the strings as opposed to over them. This gives “personality” to each register, as Gajić says, distinct voices, like listening to a choir. The keys are shorter, their action quick.

Carretín also plays a historical violin on the album, “a rare find,” built after World War II but set up in the way of an early Romantic era violin with gut strings. He plays it with a pre-modern bow made in London around 1800, just like the kind that were still in favor in Vienna at the time Schubert’s sonatas were composed.

“It’s what you would have found in Mozart’s orchestra or Hyden’s,” Carretín says. “What this bow has that a modern bow doesn’t is natural decay. Each note naturally has a little fade. Because of that decay, from note to note, gesture to gesture in larger phrases, one finds a spoken quality in the music. The bows we use today favor continuity or sustained sound, larger dynamic shapes without dips and ebbs in line. The bow in this recording and the bows that [historically] came before have in them a music-as-speech element.”

Together, these instruments convey the conversational tone of Schubert’s music, a sense that the instruments are speaking to one another.

There can be obstacles, however.

“When the sonatinas become turbulent this bow struggles,” Carretín says. “It can squeak or squeal depending on humidity. Timbre can change in an instant.”

Still, Carretín appreciates the challenge. He quotes one violinist who went back to gut strings after metal strings became the standard after WWI:

“When things are made too easy spirituality is lost.”

To fully capture the chamber music experience, Gajić and Carretín recorded in a 75-seat recital hall with a two-story glass wall, wooden floor and side walls, and the remaining wall of stone. They brought in mastering engineer Daniel Shores to work his magic with mics in order to produce a recording that conveys the sense of what it would have been like to have listened to these sonatas in a cozy palace salon.

“The challenge in doing a project like this is modern instruments we hear today are really a product of the recording industry,” Carretín says. “Throughout the history of recording, instruments have become more refined, they don’t break or squeak. There’s an accuracy that the instruments make readily available. That’s really a product of 100 years of recording. To go back to the methods and the equipment of before recorded music and then try to record it opens up challenges. It’s super rewarding for us, but not lost on us that this is such a 21st-century endeavor.”

ON THE BILL: ‘BOUNDLESS,’ an album of sonatas for violin and piano, by Zachary Carretín and Mina Gajić. Available on streaming platforms and for down at sonoluminus.com.