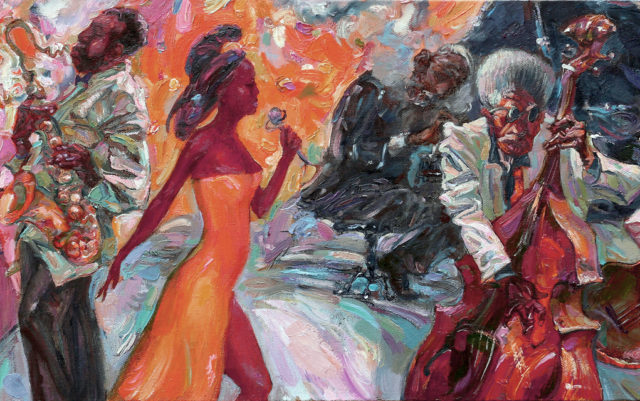 When Ray Charles asked, “Come live with me and won’t you be my love?”
Gladys said she’s leaving to be with him
On a midnight train to Georgia
Aretha politely demanded, “Will you call me the moment you get there?”
And Toni Braxton responded with, “Maybe…”
John Legend said he’ll think about it
And Aretha circled back around with “You better think.”

The black sound started a war between the East and West
While leading thousands from the South to freedom.
The black sound is the culture/the revolution/the solution, and the bigotry.
If we say “No more,” the soul of America will cease to exist.

Biggie said, “It was all a dream”
And Meek added a “nightmare,” too.
After Teddy said it was time to wake up
Soul II Soul regulated us
Back To Life Back To Reality.

The Black Sound is a parody of our perfect destiny.
That’s why everyone was so confused when
When Mary sanged she was going down
And Erykah gave her “three dollars and six dimes…”

It was such a contradiction when
One black woman said, “I can’t stand the rain”
And another sanged, “Go on and let the rain pour”
But
LaShun Pace cried, “There’s a leak in this old building and my soul has got to move”
Luther Vandross giggled with, “Good, ’cause a house is not a home”

Everyone, still confused, turned to
The Education and The Miss replied
“Lauryn is only human”
So they turned to Nas, and he offered One Love
Enticing CeeLo to holler, “Fuck you.”

When Marvin asked, “What’s going on?”
Alicia had to tell the truth with Karma

In the name of the Black Sound
Miley Cyrus twerks
Justin Timberlake rifts
And Christina Aguilera holds all her syllables.

While Beyoncé rings The Alarm of Formation, Sam Cooke
Suggests, it seems like A Change Is Gonna Come and Sweet Etta James, relieved, exhales
With, “At Last…”
The black sound is the only sound that will save America
Shhh…
Listen closely.

Lester Eugene Mayers is the author of 100 Poems for 100 Voices (from which this poem is an excerpt) and African Booty- Scratcha lovin da ashy-blaq fat chall wif yella teef, peasy head & a broken smile. He’s currently a MFA candidate at the Jack Kerouac School of Disembodied Poetics.