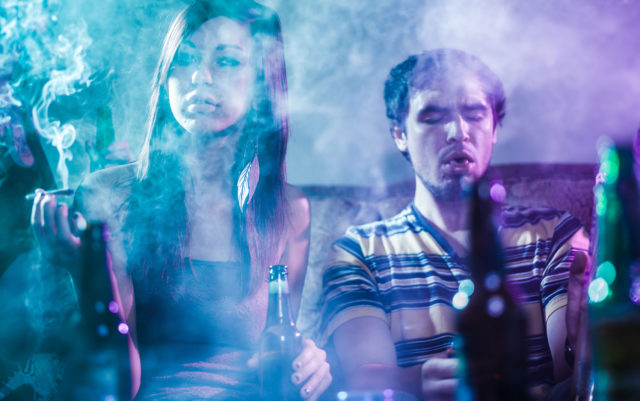 File under: “There ain’t no flies on the nation’s stoners.”

According to a survey done by a group called AmericanMarijuana.org, 49% of marijuana users purchased extra pot in anticipation of the coronavirus lockdown. The survey covered 990 self-identified stoners.

Of those topping up their ganja supplies, 55% said they did so to calm themselves during the epidemic, 22% weren’t concerned about the disease but just wanted to have some pot to chill at home, and 23% feared both the plague and a possible marijuana shortage.

Among the 51% that didn’t stock up, more than a third said they weren’t worried about a pot shortage, 29% said they didn’t stock up on anything, and 35% prioritized stocking up on toilet paper, face masks and hand sanitizers ahead of weed.

The survey also asked participants which one of several commodities is more important to them than marijuana during the epidemic.

Ninety-five percent said food was more important to them than marijuana. (It’s possible the other 5% belong to the minority of stoners who don’t get the munchies when high. It is also possible that the 95% who rated food first were buzzed and chowing down when they took the survey. But we digress.) Eighty-five percent rated hand sanitizers more important than pot; 15% put marijuana first. Eighty-three percent said toilet paper was more important to them than marijuana; 17% rated inhaling ahead of wiping. Seventy-two percent rated marijuana ahead of face masks; 28% put face masks first.

And the survey asked participants which of five different activities they would rather do if the federal government imposes a nationwide quarantine. Binge-watching TV finished first, followed closely by doing hobbies. Smoking weed came in third, ahead of surfing the internet and indoor exercising. (It is widely believed that it is possible to smoke pot and binge watch TV at the same time, but the survey did not explore such “dual use” diversions, or whether getting high made indoor exercise suck less.)

Other findings included the percentage of marijuana users who consumed more pot since the coronavirus epidemic broke out — 34% — and the percentage of pot smokers who were “worried sick” about the epidemic — 40%. Only 6% of the 990 people who took the survey said they didn’t really care at all about the epidemic (suggesting that there may not be as many clueless stoners as there are sometime made out to be).

AmericanMarijuana.org, the survey’s sponsor, characterizes itself as a medical marijuana resources site.

The high-CBD marijuana strain Charlotte’s Web was named after Charlotte Figi, a little girl afflicted with hundreds of grand mal epileptic seizures, whose condition wasn’t helped by the existing treatments. Her parents eventually sought out Colorado-based Stanley Brothers, which developed the strain for her. The oil from the Charlotte’s Web strain reduced her seizures to two to three per month.

On Wednesday (April 7) KRDO, Colorado Springs reported that Charlotte died of a coronavirus infection. She was 13.

Among the casualties of the coronavirus epidemic are several marijuana campaigns that have been killed off or at least put into a persistent vegetative state.

Leading the list is the drive to get the New York legislature to legalize recreational marijuana; New York Governor Andrew Cuomo says it is dead for the session. Apart from the unwillingness of lawmakers to focus on marijuana legalization in the midst of an epidemic, several members of the legislature are out after having tested positive for the virus.

Backers of a Missouri recreational marijuana drive late last month announced there was no practical way they could gather enough signatures this cycle due to the coronavirus lockdowns and the reluctance of people to touch the petition circulators’ pens and petitions.