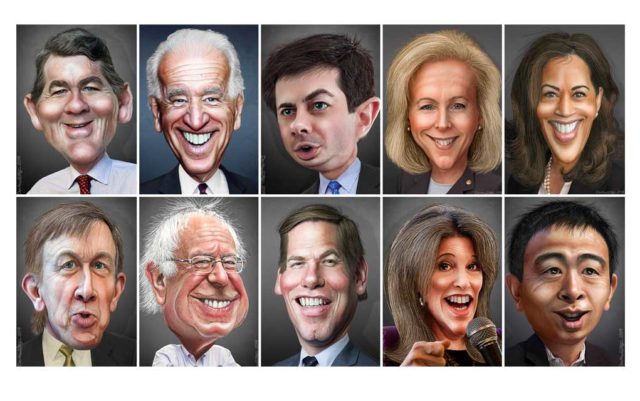 If marijuana wasn’t an issue in the 2020 presidential campaign before the second Democratic candidates’ debate, it sure is now.

Two brutally blunt exchanges — one between Cory Booker and Joe Biden, the other between Kamala Harris and Tulsi Gabbard — guarantee that marijuana legalization is going to be front and center from now on.

(All of the quotes that follow are taken from the NBC News transcript of the debate.)

Senator (and former Newark, New Jersey mayor) Booker had called Biden’s plan “an inadequate solution to what is a raging crisis in our country.”

Booker responded that “…since the 1970s, every major crime bill — every crime bill, major and minor, has had his name on it. And, sir, those are your words, not — not mine… you claimed responsibility for those laws. And you can’t just now come out with a plan to put out that fire. We have got to have far more bold action on criminal justice reform, like having true…”

Booker: “…marijuana justice, which means that we legalize it on a federal level…”

Booker: “…and reinvest the profits in communities that have been…”

Biden wasn’t about to take it lying down. He had come loaded for bear and unloaded on Booker:

“In 2007 you became mayor [of Newark] and you had a police department that was — you went out and you hired Rudy Giuliani’s guy; you — and engaged in stop-and-frisk. You had 75 percent of those stops reviewed as illegal. You found yourself in a situation where three times as many African-American kids were caught in that chain and caught up…”

Booker was having none of it. He said all of the problems Biden spoke of, Biden created, adding:

“Mr. Vice President, there’s a saying in my community, you’re dipping into the Kool-Aid and you don’t even know the flavor…

“Sir, you are trying to shift the view from what you created,” Booker said. “There are people right now in prison for life for drug offenses because you stood up and used that ‘tough on crime’ phony rhetoric that got a lot of people elected but destroyed communities like mine…”

The exchange between Gabbard and Harris was even nastier.

It started when Tapper asked Gabbard to elaborate on why she had earlier said it was a false accusation for Harris to have said Biden is a racist.

Instead of answering, Gabbard lit into Harris:

“Now Senator Harris says she’s proud of her record as a prosecutor and that she’ll be a prosecutor president.

“But I’m deeply concerned about this record. There are too many examples to cite but she put over 1,500 people in jail for marijuana violations and then laughed about it when she was asked if she ever smoked marijuana.

“She blocked evidence — she blocked evidence that would have freed an innocent man from death row until the courts forced her to do so. She kept people in prison beyond their sentence to use them as cheap labor for the state of California…”

Harris replied that as California Attorney General she had worked at reforming the state’s criminal justice system, “which became a national model for the work that needs to be done.”

“And I am proud of that work,” she added.

Harris: “That I am an advocate for what we need to do to not only decriminalize, but legalize marijuana in the United States.”

Gabbard retorted: “The bottom line is, Senator Harris, that when you were in a position to make a difference and an impact in these people’s lives, you did not…”

Going forward, candidates for any office, Democrat or Republican, who participated in the drug war (and who, like Biden, were cheerleaders for it), are going to have to answer to the voters for what they did.

And it’s about damn time.