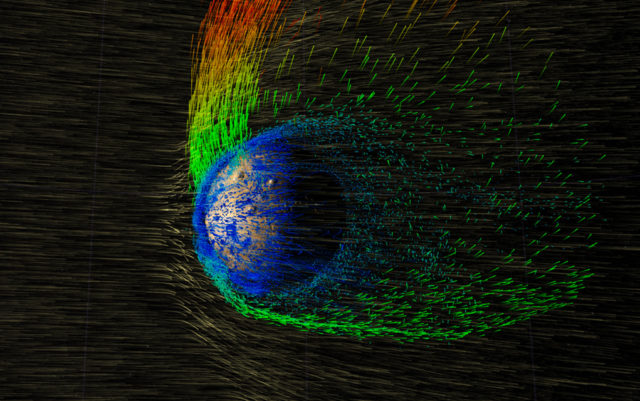 Imagine spending years coming up with an exciting idea for a space telescope, proposing it to NASA, and getting approval to develop the concept just as the world shuts down for COVID-19. This is the situation faced by researchers at the University of Colorado’s Laboratory for Atmospheric and Space Physics (LASP), who have until the end of this year to demonstrate the feasibility of key technologies for a mission to identify neighboring planetary systems that may have the best chances of sustaining life.

The proposed mission, Extreme-ultraviolet Stellar Characterization for Atmospheric Physics and Evolution (ESCAPE), was one of two concepts approved by NASA in mid-March for further development. The team, led by LASP astrophysicist Kevin France, was given $2 million and nine months to fabricate and test engineering models of some critical components of their new telescope design, demonstrating that ESCAPE will be able to perform as expected. The stakes are high, because next spring NASA will select one of the two concepts to advance to the next phase of mission development, aiming for launch sometime in 2025.

The goal of ESCAPE is not to discover planets around other stars, but rather to understand the radiation environments of known planetary systems, which will help NASA focus on the best places to search for life. Stars emit radiation across a full spectrum, from low-energy radio waves to infrared, visible and ultraviolet light, all the way up to high-energy X-rays. The amount of light produced at each of these energies depends on the size and age of the star, with the more damaging radiation being more problematic for planets around smaller and younger stars. ESCAPE will focus on radiation that falls between the ultraviolet and the X-ray.

“ESCAPE will measure light from nearby stars in a part of the electromagnetic spectrum that has not been observed very much before,” says Allison Youngblood, a research scientist at LASP who is working on the mission. “This light is important because it helps determine whether or not an exoplanet, or even planets in our solar system, will lose their atmospheres to space.”

Youngblood grew up in Houston, and knew that she wanted to be a scientist when she began studying at Wellesley College in Massachusetts. In her first semester as an undergraduate, she took an introductory astronomy class and was immediately captivated. She came to Boulder in 2010 for the doctoral program in astrophysics, and contributed to some early discussions about the ESCAPE mission concept, which was related to her thesis project. After finishing her Ph.D., she worked as a postdoctoral researcher at NASA’s Goddard Space Flight Center in Maryland before returning to Boulder last year to help prepare the proposal for ESCAPE.

“Extreme ultraviolet (EUV) light can ionize atoms; it’s really dangerous stuff,” Youngblood explains. “The UV that you think of, causing sunburns or skin cancer, is pretty mild compared to what EUV light can do. But thankfully it is blocked by the highest layers of our atmosphere.”

The interaction of EUV light with planetary atmospheres is not a coincidence, it is precisely why the mission will focus on this type of radiation. In the 1990s, NASA operated a mission called the Extreme Ultraviolet Explorer (EUVE) that surveyed the entire sky, gathering observations of more than 800 targets over its 8.5-year lifetime. In the 30 years since EUVE was designed, the technology for detecting this type of radiation has improved dramatically, with modern instruments achieving 100 times the sensitivity. This will allow ESCAPE to obtain detailed measurements showing the potential influence of EUV starlight on the atmospheres of nearby planetary systems.

Youngblood’s primary responsibility for the ESCAPE project is to identify the best sample of 200 nearby stars for the telescope to observe during its two-year mission. The target list will include stars covering a wide range of sizes and ages to help characterize the full variety of radiation environments in neighboring planetary systems. If a planet is subjected to high doses of EUV radiation for too long, it will eventually lose its protective atmosphere and become hostile to the development of complex life. By filling the gaps in our understanding of what types of stars provide a suitable environment for life to flourish, the ESCAPE team will help NASA focus its resources on the most promising habitable worlds over the coming decades.

If NASA selects ESCAPE next year instead of the competing mission, the project could receive up to $145 million in funding over the next four years. This would support additional design and technology development, culminating in yet another review by NASA, followed by the final design, fabrication, integration and testing of the spacecraft prior to launch. All told, nearly a decade will have passed between the initial conversations about the mission concept and when the first scientific observations will return from the mission. And that’s if it succeeds at every step.

“Here at LASP, we are slowly beginning to bring laboratory staffing levels back up, but NASA centers are still on full shutdown,” France says. “This includes NASA’s Marshall Space Flight Center, where prototype ESCAPE telescope optics are to be fabricated. While the design work and science mission work can continue remotely, at a basic level, we cannot get people into the lab to demonstrate the technical side of the proposal.”

It’s a long road to develop a NASA mission from concept to operations. Hopefully, by the time ESCAPE returns its first scientific data, the COVID-19 pandemic will be no more than a distant memory.