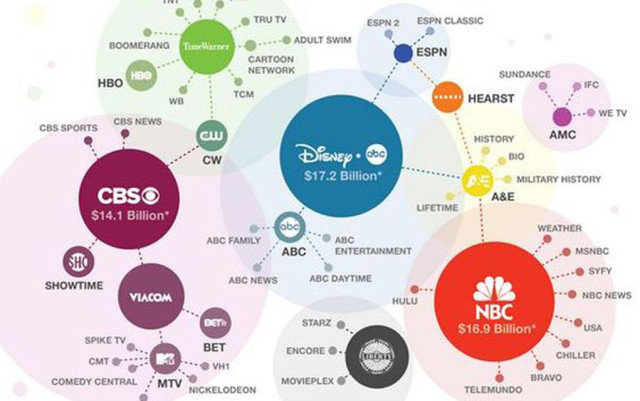 For beginners, the 2016 presidential race is about choosing between corporate-sponsored politicians and outsiders, aka non-establishment candidates.

This has occurred because most Americans are fed up with a system that only serves the wealthy donors and corporations who fund the establishment politicos.

So the news coverage should be expected to reflect this, but it really doesn’t in a meaningful way and there is good reason, namely establishment media.

Since the creation of the original Media Monopoly maps created by NYU’s Mark Crispin Miller two decades ago, we have known who controls the news, or better said, we got the opportunity to know who owns the news. But because the news owners weren’t about to report on themselves and their own media monopolies, most Americans are still in the dark. Back in 1996 it was GE, Disney and Westinghouse who controlled two-thirds of all media in the U.S. Today there are even fewer players.

The point is this: the owners of the talking heads we see analyzing the debates and primaries on network and cable TV, as well as the internet, are simply really highly paid employees of major corporations that have used the current broken campaign finance system to control politicians and the laws they create. So in order to maintain the status quo, which serves these corporation’s profits so well, they use their news employees to manipulate coverage in order to impact voting outcomes.

How else can you explain why the Today Show decided to give air time to only Hillary Clinton, not her opponent Bernie Sanders who was tied in the polls, on the morning of the Iowa caucuses? What else can explain why “Super Journalist” Savannah Guthrie’s first question to Clinton was something to the effect of, “Why aren’t you making more out of the fact that if Bernie Sanders were to win the Democratic nomination it would pretty much guarantee we would have a Republican president?” Of Course Clinton agreed to this corporate propaganda designed to scare Sanders supporters. And then there was mighty mouth Chris Matthews criticizing Sanders at every turn: He should have done this, he should have done that, and finally noting the Iowa results were a huge setback for Sanders.

Are you effing kidding me, Chris? It came down to Clinton, the establishment’s (read: the corporate media’s) chosen one, having to win six out of seven coin flips in tied precincts for Clinton not to lose. Personally, I’d like to see those coins, because in Vegas they would give you a-thousand-to-one odds you couldn’t win six coin flips in a row. I’m guessing Hillary’s head was on both sides. But it doesn’t matter.

Guthrie makes $2 million a year, and Matthews rakes in $5 million a year. And it’s the same all over television news. These are not people who are likely to bite the corporate hands that feed them. No one has to send them an email telling them to play up Clinton and play down Sanders. They know their multimillion-dollar contract is up in a couple of years and they aren’t dumb enough to do anything to jeopardize that.

This is what is wrong with corporate media and its coverage of this election.
Where else could Hillary Clinton declare Sanders a mad man who wants to create a healthcare system for everyone that can never, ever happen in America on one night, and then declare her undying commitment to universal healthcare the very next day, and not see endless loops of those two conflicting statements running over and over again?

The corporate media likes Citizens United as much as Wall Street. Please watch it accordingly.