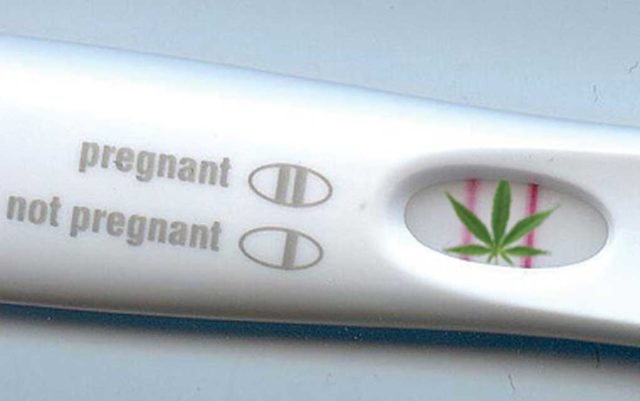 First comes love, then comes marriage, then comes unfollowing all of my friends on Instagram when they stop posting photos of their old, fun lives in favor of creepy 3D sonograms and baby bump pics. And right now, there seems to be a serious influx of pregnancy announcements. It’s almost as if every couple decided to toss their birth control over the holidays so they could make every wedding they attend this summer about them.

Sure, I’m definitely happy for them and slightly jealous because I often dream about all the food I’ll eat with reckless abandon if I ever get accidentally pregnant one day. But aside from all the attention they’ll get on social media, pregnancy isn’t that glamorous, especially when it comes to navigating pain and morning sickness. Unfortunately, there is no definitive research when it comes to the relative safety of cannabis consumption during pregnancy, but apparently, dispensaries seem to think they have all the answers.

A recent study found that some Colorado dispensaries are promoting cannabis use during pregnancy. According to the study in the journal Obstetrics and Gynecology, a majority of the dispensaries contacted recommended medical marijuana products to help treat morning sickness.

Wow. Just wow. To me, it seems pretty ballsy and inappropriate for dispensary workers with no medical background to be giving out medical advice to pregnant women. Doctors, nurses and other medical professionals are typically reluctant when it comes to conversations about marijuana. They either don’t want to discuss it or straight up reject all consumption. Understandably, the stigma of cannabis can often make women hesitant to be fully honest with their physicians. With little to no information coming from their doctors, it’s typical for pregnant women to turn to friends, the internet and possibly marijuana dispensary workers for answers.

The Marijuana Industry Group stated that it is protocol for dispensary workers to urge customers to speak with a medical professional for any of their health questions, WFTS Tampa Bay reported. “What this tells us as an industry is that we have a gap in our ‘onboarding process,’ in terms of training our dispensary workers to provide not just a good conversation on products, usage and dosing … but it’s very important that employees clarify they are not medical professionals,” said Kristi Kelly, the group’s executive director, WFTS reported.

Although marijuana is medically known for reducing nausea, the science is still not clear how consuming cannabis affects a fetus. The placenta is designed to prevent harmful molecules in the mother’s body from coming into contact with the fetus, but it’s unclear if any components of marijuana are able to break through this barrier. Multiple studies provide conflicting results.

Moreover, the nature of that research itself has been limited. For decades, scientists interested in studying the effects of cannabis have had to overcome significant roadblocks set up by the federal government. What’s more, directly tampering with a fetus or a pregnant mother’s health in the name of scientific research crosses into problematic ethical territory, and is not allowed by the rules of most credible professional associations and institutional review boards, which review the ethical implications of proposed research studies.

So while it’s a personal choice and every pregnancy is different, most medical professionals suggest that when in doubt, it’s best to simply hold off on getting stoned during your pregnancy, no matter how unbearable your morning sickness may be.