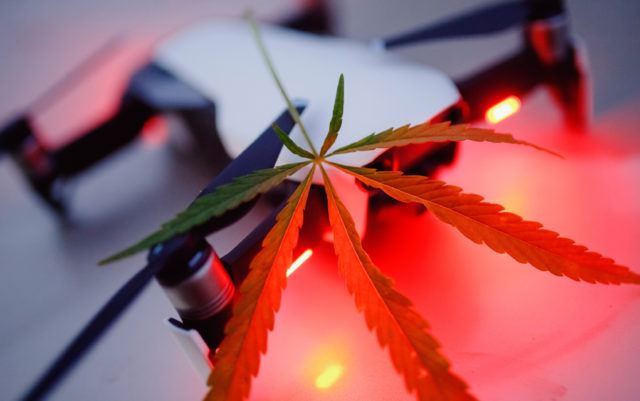 Before you get too excited, no, they won’t be delivering to residential homes; this is a business-to-business marijuana delivery service for wholesalers, processors, dispensaries and grow operations. The hope is that drone-based delivery will reduce cost of transportation, cut down on greenhouse gas emissions and provide another layer of security for marijuana businesses.

The buzz around drone delivery started in December when Bellevue, Washington-based GRN Holdings announced its intent to purchase Squad Drone (also a Washington-based company) to launch a delivery drone program by licensing the company’s drones and technology to state-registered hemp and cannabis companies.

“We’ve been in the industry for a while and we’ve seen the inefficiencies that transportation has brought to the industry, from Sprinter vans to insurance charging three times the market rate, or the fact that you have to pay people quite a bit of money to deliver [and] vans that sit in traffic for hours on end in places like Seattle or San Francisco,” Justin Costello, CEO of GRN Holdings, told Leafly in a Feb. 20 article. “[All] this hikes up the costs [of delivering cannabis] more than two to three times than for an average deliverable … We saw an ability to purchase this technology that’s definitely a market disruptor.”

GRN and Squad Drone had been conducting testing and customization for about a year before they announced the acquisition. The program will launch in March, if all goes according to plan, with a fleet of just six drones that are capable of carrying a payload of up to 40 kilograms (about 88 pounds) each. The drones have a delivery range of 10 kilometers (about six miles). Each drone will be equipped with a GPS navigation system and will be flown by licensed drone pilots from a command center in Seattle. An onboard iPad installed with CannaTrac’s cashless payment system will allow for closed loop payments, which is a pretty big safety feature for an industry that has been shut out of the federal banking system.

Currently, states with regulated marijuana — like Colorado and Washington — use fleets of vans to deliver products and cash between marijuana businesses. Outfitting these vans with security systems and climate controls (which can cost tens of thousands of dollars), as well as insuring the vans, paying the drivers and fueling is pretty expensive.

“Logistics and security are a large cost to the industry,” GRN said in a statement. “We expect to remove about 80% of costs, increase delivery timelines/safety, and develop a more eco-sensitive process for getting product from point A to point B. The drones are battery operated but have a hybrid system that acts to recharge and extend flight times if needed. … We expect hiring about 20 employees in the various cities to hook the drones into charge ports, calibrate them, and ensure the safety totes and computer systems pass flight requirements.”

But here’s the thing: Transporting cannabis by air is still prohibited by the Federal Aviation Administration (FAA). According to the Washington Business Journal, GRN has asked the U.S. Department of Transportation and the FAA for several exemptions from federal law and regulations. Whether those exemptions have been granted or not is unclear.

GRN CEO Costello told Leafly his company is “putting that off to the people we license or franchise the technology to.”

With FAA roadblocks, limited payload carries and a range of only six miles, it’s pretty clear drones won’t be replacing van fleets anytime soon. But it is a sign that the cannabis industry will continue to push the boundaries of how business in America is conducted.