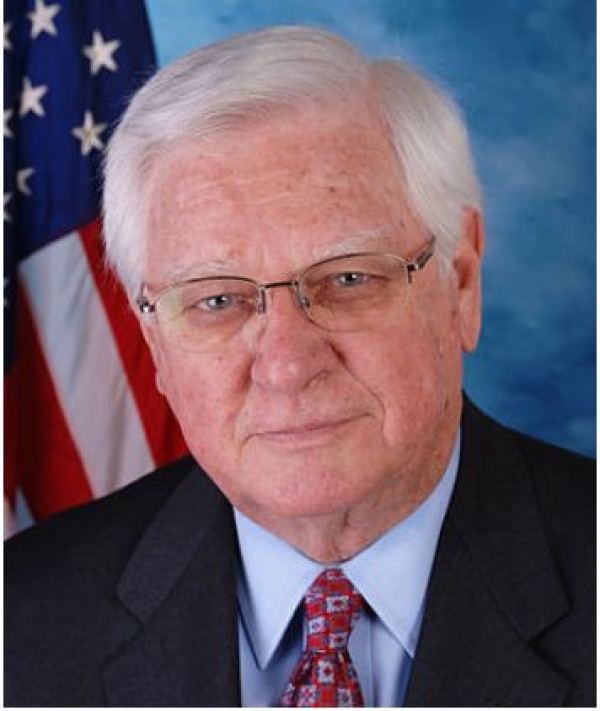 It’s impossible to understand the labyrinthine rhyme or reason behind any part of the Goliath spending bill passed by Congress to keep the government running another year. A bill that includes a rider that, for instance, would give Wall Street the same opportunities to be reckless with investments on the government dime like it did back in the early 2000s again sounds like lunacy to me.

The riders dealing with cannabis are as strange and bizarre as the Wall Street giveaway, and they send conflicting messages. On the one hand, we have the attempt by Maryland Rep. Andy Harris and Kentucky Rep. Hal Rogers to nullify the District of Columbia’s recent approval of cannabis legalization. A law was passed in November, with almost 70 percent of voters approving, that allows District adults to grow, possess and share small amounts of cannabis.

I wrote a couple of weeks ago about Harris (calling him a representative is misleading — in this case, he “represents” only himself ) who, with a couple other prohibitionist congressbuds, decided to put the kibosh on D.C. decriminalization, apparently just because they could. Rep. Harris is under the mistaken impression that arresting people for cannabis possession helps keep it away from children. He even nullified an earlier D.C. law that would have lowered marijuana possession from an arrest to a summons.

In a strange postscript, it appears that the way Harris wrote the rider might actually allow the law passed in November to go through. Jacob Sullum outlines the murky legal arguments at Reason magazine. But basically, Harris’ wording says that “none of the funds contained in this Act may be used to enact any law, rule or regulation to legalize or otherwise reduce penalties associated with the possession, use or distribution of any Schedule 1 substance.” But the law has already been “enacted,” so it might not stop what has already happened.

Even if that were the result, the next step would be to set up rules and regulations for retail outlets and sales in the District, and the Rogers/Harris rider wording would likely not allow the District to proceed any further with legalization beyond what was passed in November. At this point, both sides are hunkering down. D.C. officials say that, since the voters have spoken, they have no choice but to move ahead. Harris’ legal team says the wording prohibits that.

Perhaps the vague wording happened because Harris and Rogers are trying to sneak this through before the next Congress is seated. District officials, under the D.C. Home Rule Act, will present the law to Congress for a mandated 30-legislative-day review period in January. Even if Congress acts to stop the law, it would require the president’s signature, and Obama has indicated he doesn’t like congressional meddling into D.C. local politics. Who’s right? We shall see.

The Harris rider could affect the 646,000 people who live in the District. Another one will definitely affect a whole lot more Americans. This one stops the Justice Department from spending money to interfere with cannabis businesses that operate legally under state guidelines or patients who use those businesses or cannabis products. It would also stop federal interference in hemp production in any state that legalizes it.

That’s a pretty big deal. It means that even though the federal government still considers cannabis a Schedule 1 drug with no medical use, it cannot use federal funds to interfere with any state that has a medical cannabis program, any legitimate business operating legally under state law or any person using cannabis under medical guidelines. (It would not keep the DEA from arresting people who aren’t medical patients.)

President Barack Obama and Attorney General Eric Holder have both shown increasing support for state control over medical and/or retail cannabis, but the Justice Department still raids medical businesses, and federal attorneys have hassled, harassed and arrested medical business owners that were legal under state laws.

When this passed the House last May, chances of it also getting past the Senate without serious modifications weren’t promising. The bipartisan amendment was co-sponsored by Democrats Sam Farr, Jared Polis, Barbara Lee, Steve Cohen and Earl Blumenauer and Republicans Dana Rohrabacher, Don Young, Tom McClintock, Paul Broun and Steve Stockman, and it passed last year 210-189, with 49 Republicans joining Democrats in voting yes.

I think this gives us a better indication of where Congress is heading when it comes to cannabis in the future. The bipartisan nature of the legislation indicates that more Republicans are coming around to the idea that responsible cannabis and hemp legalization should be left up to the states, more than half of which have already made that choice. All Congress needs to do is change cannabis’ dubious Schedule 1 classification, and that process could proceed.

An earlier version of this story stated that Andy Harris represents Delaware.

You can hear Leland discuss his most recent column and Colorado cannabis issues each Thursday morning on KGNU: http://news.kgnu.org/category/features/weed-between-the-lines/