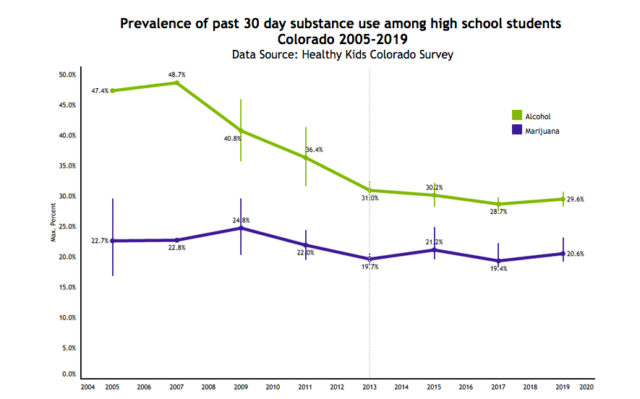 A recent survey of Colorado youth illuminated how many of our state’s middle and high schoolers are consuming cannabis, and how they’re using it. The data, released in the Healthy Kids Colorado Survey, also illuminates a stark decrease in underage alcohol consumption among kids in the state.

In Boulder County, almost one out of four high schoolers reported consuming marijuana in the last 30 days. Statewide, about 20% of kids in the same demographic reported using marijuana in that time frame. That’s about on par with the national average, although data from 2019 is not yet available.

A little more than one out of three Colorado high schoolers reported ever using marijuana, again on par with the national average.

About 53,000 Colorado high schoolers and middle schoolers responded in the survey. Previous data collection efforts allow state authorities to compare current trends to those going back to 2005.

One highlight of the data is that alcohol consumption among high schoolers has dropped precipiptously over the last decade and a half. In 2007, for instance, almost half of high schoolers who responded to the survey reported consuming alcohol in the past 30 days; in 2019, that number was 29.6%. Lest you think young’uns are trading in one vice for another, data shows pot use has remained steady since 2005.

The majority (55.9%) of underage cannabis consumers are smoking it. About 20% are dabbing it — taking a concentrated form of THC (the chemical in cannabis that gets you high), heating and inhaling it. Vaping and eating pot comes in third and fourth, respectively.

The data helps health and local officials understand teen substance use and guide regulations that mitigate risk and ultimately keep kids healthy, as the survey name suggests. It was done with the help of state and local health officials, and the survey team will use the data to help school districts across the state address any issues that have emerged from the data.

Meanwhile, a study published on July 28 in The Lancet Psychiatry, found that cannabidiol (CBD) could be used to help substance abuse disorders, including pot, tobacco and opioids.

The study confirmed others that suggest CBD has minimal side effects (though it may interact with certain drugs) and that doses at 400-800 milligrams exceeded placebo results for reducing cannabis use.

As with all things in the cannabis world, more study is needed. But these sets of data provide the framework for a path forward that allows for responsible adult users to continue use while preventing negative outcomes.