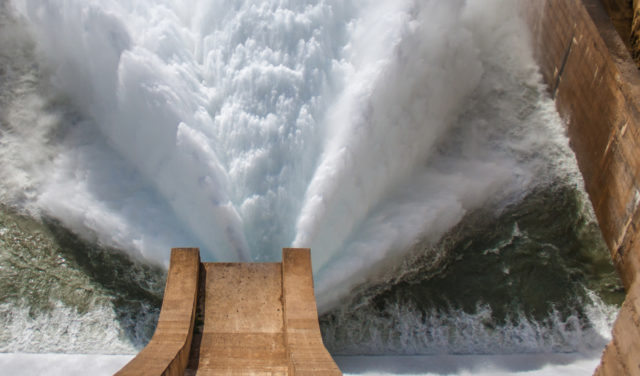 It’s hard for locals like Seth Cousin, who live on Gross Reservoir, to imagine what it will look like after the dam has been raised over 131 feet and hundreds of acres of wooded hillsides have been submerged. It’s hard to imagine fleets of construction trucks and machines crawling around the reservoir, the floodlights that will keep the project illuminated at night, and the amount of dust that will hang in the air until construction is complete in 2027.

Soon enough though, they won’t have to imagine it. Thanks to a small hydroelectric component at the bottom of the dam, the decades-long debate over the Gross Reservoir Expansion Project is over and Denver Water is moving forward by decree of a federal court.

And as early as April of this year, construction will begin.

“[Denver Water] has everything they need,” Cousin says. “There’s nothing, absolutely nothing that can actually stop them.”

Cousin bought his home on the north shore of Gross Reservoir in 2018, and shortly afterward he became involved with The Environmental Group (TEG)—an action group that’s been fighting the Gross Reservoir Expansion Project since its inception. On its webpage, savebouldercounty.org, the group calls the Gross Reservoir Expansion Project “the most environmentally damaging construction project in the history of Boulder County.” It argues it will leach toxic chemicals and heavy metals into the waterways, that construction traffic will make the local roads hectic and far more dangerous, and that recreation opportunities at the reservoir will be plunged underwater.

At the same time, Denver Water, the utility behind the expansion project, argues that this project is essential to providing water for its 1.5 million Front Range customers. Without this project Denver’s water supply is vulnerable, it claims.

Todd Hartman, a spokesman for Denver Water, explains that’s because Denver Water’s system is deeply imbalanced: 90 percent of its storage is on the south side of the city, with only 10 percent on the north side. This project will increase Gross Reservoir’s storage capacity by 72,000 acre-feet, making it the second largest in Denver Water’s system. Denver Water says that’s roughly enough water for 288,000 residential households. An additional 5,000 acre-feet of water will also be stored as an “environmental pool” to support environmental needs.

The Denver Water Board of Commissioners approved a $531 million construction contract for the project.

“By expanding Gross, more water can be stored on the north side, better ensuring a safe, reliable water supply in the event of drought and catastrophic wildfire,” Hartman says, “both of which have threatened Denver Water’s ability to deliver water to its customers in the past.”

That’s why Denver Water has pushed the Gross Reservoir Expansion Project so tenaciously since it started the permitting process in 2003. The project’s Fish and Wildlife Mitigation Plan got approval from the Department of Fish and Wildlife in 2011. Then in 2016, the Department of Public Health and Environment approved the 401 State Water Quality Permit for the project, and in 2017 the Army Corp of Engineers issued Denver Water a 404 Permit and Record of Decision. The last five state governors have supported this project, as well as environmental groups, business interests, and water users on both sides of the Continental Divide, according to Denver Water’s website.

The utility says it collaborated with Boulder County staff, elected officials, and locals to address public concerns about construction disturbances and environmental hazards. Over 19 years of negotiation, that collaboration resulted in a proposed settlement between Denver Water and Boulder County that includes nearly $13 million for mitigation and 70 acres of open space transferred to Boulder County.

That $13 million breaks down like this: $5 million is to be administered by Boulder County to address residents’ concerns over noise, light, and dust; $5.1 million will be for acquiring land for open space, conservation easements, and trail corridors; $1.25 million will be used for offsetting carbon emissions from the project; $1 million will go towards restoring South Saint Vrain Creek; $250,000 will go towards a biochar pilot to further reduce emissions; and another $250,000 will be for Boulder County to pay for more rangers, communication staff, signage, and shuttles to address recreational closures during construction.

“Denver Water and Boulder County worked together this fall to develop this mitigation package,” Hartman says. “Both parties agreed on the final number as important to address potential impacts of the project and provide on-the-ground benefits to Boulder County residents.”

From the perspective of Boulder County commissioner Marta Loachamin, though, agreeing to Denver Water’s settlement wasn’t so harmonious. In fact, she says, the county ended up between “a rock and a hard place,” without much of a choice.

“The county wanted more from a settlement statement,” Loachamin says. “None of [the commissioners] are satisfied. None of us were in agreement with the moving forward of this project.”

However, she says, Denver Water was moving forward, whether Boulder County agreed to it or not.

For years leading up to this, Seth Cousin and other Gross Reservoir residents, along with TEG and some of the Boulder county commissioners, thought they had a secret weapon up their sleeve: the 1041 Land Use Permit. This permitting process allows local governments to regulate a variety of development activities with guidance from the state. Cousin says he and other locals were under the impression this could be used to stop Denver Water from breaking ground on the project.

“From the get-go we knew that [1041] was the thing that the county had to do to fight this. And the reason we thought that is the county has continued to tell that to the constituents—to us,”  Cousin says. “We were told and we believed that the 1041 was where we were going to fight this.”

Marta Loachamin says she was under a similar belief.

“A lot of us, myself included . . . [were] of the understanding, and I was hearing it from residents as well, that the 1041 was the solution to stop this project,” Loachamin says. “And that was inaccurate.”

Boulder County requested a 1041 permit application from Denver Water and the utility obliged, submitting one in September of 2020. Boulder County countered with numerous queries, going back and forth with Denver Water for nine months, significantly slowing the project down. That worked until June of 2021, when Boulder County’s land use director informed Denver Water that they’d failed to provide sufficient information to county agencies; the application would have to be resubmitted.

“For nearly a year, Denver Water attempted to work through the 1041 process to obtain Boulder County’s approval by responding to Boulder County’s questions, proposing solutions to the County’s concerns, and identifying appropriate mitigation for local concerns.” Hartman says.

That was the goal of using Boulder County’s 1041, as stated by Cousin and Loachamin. However, neither they nor Boulder County’s lawyers foresaw what would come next. Frustrated by Boulder County’s process, Denver Water circumvented the county’s authority entirely and took the issue to a federal court, asserting FERC’s preeminence.

“Unfortunately, it became clear that Boulder County had no intention of issuing a 1041 permit to Denver Water in time to comply with the construction deadlines in FERC’s order,” Hartman says. “So Denver Water had to file suit to assert the primacy of FERC’s order over the project.”

He explains that because Gross Dam and Reservoir occupy Denver Water and National Forest System lands reserved for hydropower production, Denver Water had a hydropower license from the Federal Power Commission (later replaced by FERC). That license gives them federal authority to proceed with the expansion project, regardless of Boulder County’s 1041 process, because it will expand Gross Reservoir’s hydroelectric component.

Hartman says the expansion will result in an additional 4.5 megawatt hours of energy produced by that hydroelectric component annually, which is a drop in the bucket considering the average U.S. residential utility customer uses 10.75 mWh annually, according to the U.S. Energy Information Administration. That fact has raised questions among Boulder’s county commissioners about the validity of expanding that hydroelectric component.

“I believe that that hydroelectric component at the Gross Reservoir Dam was a way to ensure that the Federal Energy Regulatory Agency—the FERC—would come into play.” Loachamin says, suggesting that the hydroelectric component of Gross Reservoir was constructed (in the 1950’s) specifically for Denver Water to override Boulder’s municipal authority.

“That’s an angry accusation,” Cousin says. “I wouldn’t throw that at Denver Water.”

Still, even if it wasn’t the reason the hydroelectric component was built, Cousin agrees that the Reservoir’s expansion has nothing to do with electrical output.

“[The hydroelectric component] is not contributing now to the electric grid in any way, it won’t afterwards, and it’s not the reason why Denver Water is increasing the height of the dam,” Cousin says. “The hydroelectric plant was basically the golden ticket, which Denver Water knew they had.”

And it worked. In November, the federal court sided with Denver Water, at which point Boulder County was given a choice: accept the settlement as is, or don’t—the expansion project would move forward either way.

“Is it a good deal? It’s the expansion of a dam and a reservoir that we could not stop,” Loachamin says. “So it’s a good deal given the options of deal making—which was to get zero or get something to mitigate.”

“I don’t think you’ll find anyone who was happy with that settlement,” Cousin says, adding, “though Denver Water must be very happy with it.”

Hartman says they “look forward to beginning work on expanding Gross as soon as possible to ensure a safe, treated drinking water supply for the health and safety of a quarter of the state’s population.”

Whether Boulder County or its residents are on board with that doesn’t matter any more.

“Unfortunately, [this is] what litigation ends up being: Somebody who’s being strong armed,” Loachamin says. “We were in a really poor spot to try and negotiate something, based on a federal ruling versus us as a local government entity.”

Come April, Denver Water will be breaking ground. Hartman says they anticipate completion sometime in 2027, and then the reservoir’s extra 77,000 acre feet of storage will begin to fill up. Whether Cousin and his neighbors up at Gross Reservoir stick around to see that day or not remains to be seen.

“I’ve heard from a few neighbors already. Some neighbors say they’re staying, and then others say they’ve put the house on the market already,” Cousin says, adding that since he only bought his home on the north shore in 2018, he’s still locked into a relatively recent mortgage.

“My wife and I are kind of forced to be here,” he says. “But saying that, if in two years time, literally we can’t go outside because there’s noise and dust 24/7, I mean, who wants to live like that?”