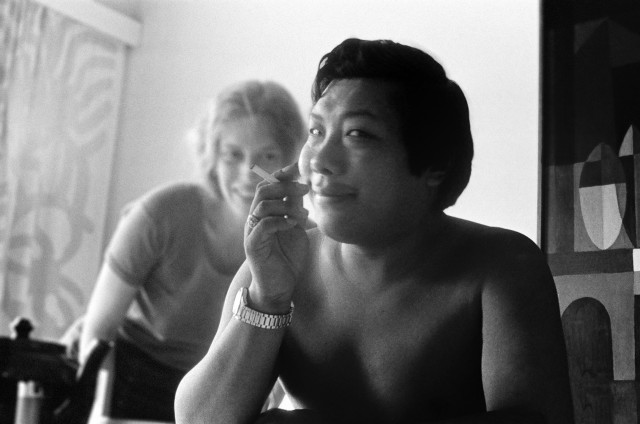 UPDATE, Friday. Feb. 18: BIFF has added a second screening of Crazy Wisdom, to be shown at the Boulder Public Library at 3:15 p.m. on Sunday, Feb. 20.

Of all the films featured at the 2011 Boulder International Film Festival, the most Boulder-centric is Crazy Wisdom. The 90-minute documentary is Los Angeles filmmaker Johanna Demetrakas’ stunning tribute to the late Chogyam Trungpa Rinpoche, the Tibetan Buddhist who founded Naropa University in 1974. Demetrakas will be on hand for a Q-and-A after the BIFF screening of Crazy Wisdom, which sadly, for such a profound (and profoundly Boulder-related) film, is occurring at 2:30 p.m. Friday, Feb. 18, at the First United Methodist Church, rather than enjoying prime-time billing at the Boulder Theater.

Demetrakas, who teaches at the University of Southern California in addition to directing both dramatic and documentary films, met Trungpa in 1971 and kept in touch until his death in 1987. Subsequently, Demetrakas — through four-and-a-half years of active filmmaking and five years of research — was able to capture perhaps the first truly intimate and honest picture of Trungpa’s controversial life.

Watching Crazy Wisdom in Boulder recently with a gathering of current and former Naropa students, it was obvious that Demetrakas succeeded in not only delineating Trungpa’s fascinating escape from Chinese tyranny in Tibet and the meat of his “Shambhala” vision — a peaceful, mindful community amid a dangerously chaotic world — but also what it was like to know “the bad boy of Buddhism” personally. For Naropa students, who are fed a PC version of Trungpa’s life — which notoriously included excessive drinking and sex — Demetrakas’ unflinching portrayal of her former spiritual guide is refreshing.

“The film was not so much about his teachings as it was about him,” she says. “One of the directions that I made to myself was that I wanted to make a film where my audience gets to experience his mind, even a glimpse. I feel like if you experience that, if you go through your own changes, questioning him, questioning his life, questioning where Naropa’s at right now or whatever …  you go beyond
that and just be there. I wanted you to experience what being around him
was for me. So I hope I got that done a little bit.”

Crazy Wisdom takes
viewers through the incredibly archaic Tibet of Trungpa’s youth — he
escaped to India via a series of night-time mountain hikes — to his
formative years in 1960s England (where a young David Bowie became one
of his disciples) to Trungpa’s breakthrough as a legendary spiritual
leader and cultural figure in America throughout the ’70s and ’80s.
Recognized as a reincarnate master when he was just 18 months old,
Trungpa alternately craved the psychedelic and sexually liberated
America of 40 years ago and sought to rid it of what he called
“spiritual pride.”

Demetrakas,
who will be in attendance for the BIFF screening on Friday, says
Trungpa’s upbringing in Tibet paved the way for his effort to become a
major force for change in the late 20th century.

“I
think he was really fascinated with the West, because he grew up in a
place that was like the 16th century in a sense. He grew up in another
time, and he was catapulted into the 20th century. Even in Tibet, he
seemed to already have a sense that the power in the whole world was in
the West and that if he was going to save the teachings, which were
being systematically destroyed in Tibet by the Chinese, he needed to go
to the West. He didn’t need to stay in India or Nepal — he needed to go
to the West. That’s where the teachings were most needed, because they
had never been there.”

Twenty-four
years after Trungpa’s death, his legacy is still alive and well,
between the work of his eldest son (Shambhala heir Sakyong Mipham
Rinpoche) and the worldwide Shambhala teachings of enthusiasts such as
Demetrakas. She says what she learned from Trungpa has had a huge effect
on her passionate work as a filmmaker.

“I
think that having studied with him — and having studied Buddhism,
period, not just with Trungpa — gave me a lot of confidence in staying
with the truth as I see it and as I can understand it. Being better at
seeing what has energy and what is drained of energy. American films are
incredibly ‘in your face,’ and that’s what I mean by energy:
understanding what’s going on and being able to meet that energy with a
camera and bring it to life. That’s kind of what he taught me.”

Naropa
— which was the first Buddhist institute in the Western Hemisphere when
Trungpa brought people like Ram Dass, Allen Ginsberg, William Burroughs
and Anne Waldman together to create it — plays a key role in Crazy Wisdom, and
the insider’s look at the school’s early history the film presents is
captivating. A guru who scorned religion as inherently mindless, Trungpa
was intent on East and West conflicting with each other — making
“sparks fly” — and urging eager (and often confused) students to find
themselves rather than follow him.

Grappling
after spirituality is dumb, he says in the film, and at one point in
the early days, Trungpa toyed with all the hippies in Boulder by
inviting them to his home and asking them to bring their marijuana.

“We
are burning self-deception,” he chanted over and over as every speck of
dope was destroyed in his fireplace. The Naropa faculty should be so
bold today. Still, the outrageous behavior Trungpa chose not to hide —
becoming paralyzed in a reckless car crash, marrying a 16-year-old British girl, sleeping with students and teachers at Naropa and
repeatedly appearing drunk in public — makes him a polarizing figure
even now.

Buddhist
historian Rick Fields once wrote that Trungpa “caused more trouble, and
did more good, than anyone I’ll ever know.” While it’s true that excess
kills, one has to wonder what it was like to be a religious figure
caught between a Western world that wanted a “pet guru” and a
motherland, Tibet, that wanted Trungpa to be a robed elitist. Near the
end of Crazy Wisdom, the title of which comes from the Naropa
founder’s mantra that it’s perilous to have your feet too firmly planted
in the material or spiritual worlds, Trungpa’s son has the final word
on his father’s legacy.

“Either he was crazy, or he was ‘crazy wisdom,’ and there was something amazing about him,” he says.

Demetrakas is more conclusive about the legacy of Trungpa, who died of alcohol-related causes at the early age of 48.

“You
know, we’re all going to die. Trungpa can’t live forever. He had to go
on, to move on, and his particular extraordinary style … you can’t make
that happen again. That’s who he was, and I was lucky enough to spend
some time with him.”

A previous version of this article incorrectly stated Chogyam Trungpa Rinpoche married an American girl, not a British one.

On the Bill
Crazy Wisdom screens at the First United Methodist Church on Friday, Feb. 18.