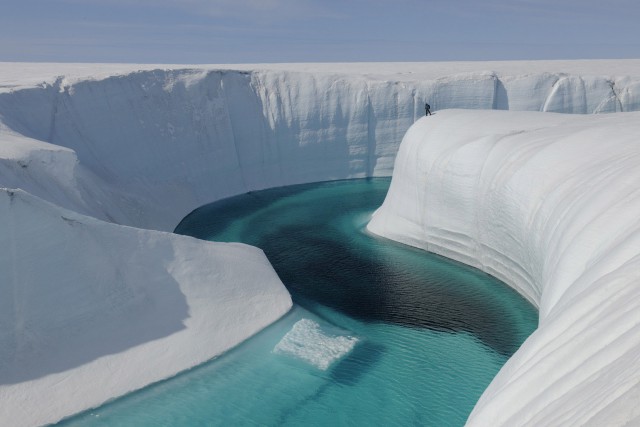 “Most of the time, art and science stare at each other across a gulf of mutual incomprehension,” photographer James Balog says in his 2009 Technology, Entertainment, Design (TED) talk. “Art, of course, looks at the world through the psyche, the emotions —even the unconscious at times — and of course the aesthetic.

“Science tends to look at the world through the rational, the quantitative — things that can be measured and described — but it gives art a terrific context for knowledge and understanding.

“In the Extreme Ice Survey, we’re dedicated to bringing those two parts of human perception together, merging art and science to help us understand nature and humanity’s relationship with nature better.”

For the Extreme Ice Survey, Balog placed 30 cameras at 15 glaciers in Montana, Alaska, Iceland and Greenland, programmed to take photographs once every daylight hour. His time-lapse photography, which has been displayed at Denver International Airport, and his still images, which were hung in the Denver Museum of Nature and Science, tell a compelling story of climate change.

“Ice is the canary in the global coal mine,” he said in that same TED talk. “It’s the place where we can see and touch and feel climate change in action.”

But before Balog first set out for Greenland in 2007 to set up his first camera to capture images of melting glaciers, filmmaker Jeff Orlowski decided the story behind documenting the glaciers was one worth capturing, and he came with video cameras. It was years before Orlowski realized that what he had recorded (in now almost 400 hours of footage) was more than just a record. It was documentary film. And Chasing Ice, Orlowski’s first feature-length film (at age 27), got plenty of buzz at its Sundance premiere and will screen again on Sunday, Feb. 19, at Boulder International Film Festival.

Balog himself started as a climate change skeptic. It was years of melting ice that changed his mind. He calls it the tangible, visible proof the world needs.

“The public doesn’t want to hear about more statistical studies, more computer models, more projections,” he says in the film. “What they need is a believable, understandable piece of visual evidence. Something that grabs them in the gut.”

Chasing Ice does that. The illustrations of waning glaciers are jaw-dropping, the massive calving events caught on film cover-your-mouth horrifying. Balog’s photos and the film are both shot often with a human, occasionally with a helicopter, in the frame for scale. It’s a dazzling view of inverse proportions: Something so small is changing something so huge.

But the film is far more than a story about watching ice melt.

“It’s a story about climate change that you can experience through James and his character,” Orlowski says.

Balog’s story is that of an obsessive, committed to work through trial and error that can take months to resolve, tweaking camera systems to last hurricane-force winds and -40 F temperatures.

“James has pushed himself to the limits to create evidence that this is going on,” Orlowski says. “His art and his work is a response to the culture that we live in, and the world we’re living in is one where people are still debating whether climate change is real. … James is just trying to say this is what’s going on.”

The film’s all-star-packed production team includes Paula DuPré Pesman, who also produced The Cove, and Jerry Aronson, who directed The Life and Times of Allen Ginsberg, as producers. Both are previous recipients of Sundance Film Festival awards.

“I saw some footage and was immediately hooked on the film,” says DuPré Pesman, who knows Balog personally. “I came home and told my husband I have to do this movie, this is for our kids.”

She continues, “I’ve always been drawn to stories about people and why they do things, and I was very engaged in following James’ journey, his sacrifices, the things that he personally has given up — time with his family, his health and his safety, he puts a lot of things on the line to tell this story, and I feel like that’s an important piece of the story.”

The film’s visceral, visual evidence of climate change looks like it’s going to play to a full house at BIFF, and it will screen again at the Austin multimedia festival South by Southwest, and on television — National Geographic just purchased the television rights for the documentary.

The tide has turned