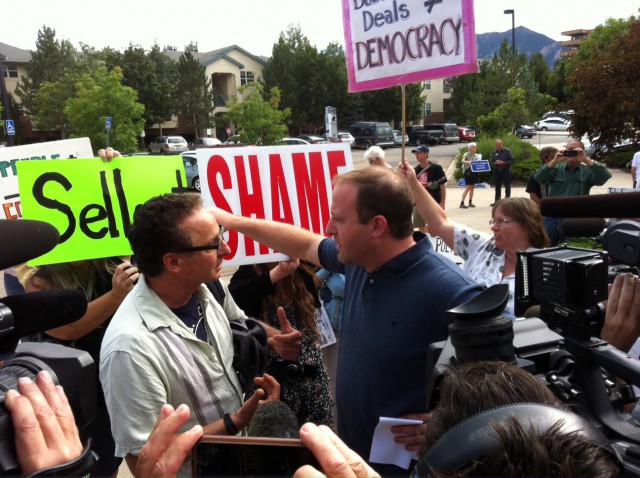 On Monday, U.S. Representative Jared Polis (D-Boulder) and Governor John Hickenlooper agreed to drop two ballot initiatives that would have given communities more control over fracking in their towns and would have required oil and gas wells to be set at least 2,000 feet away from occupied structures.

Monday was the final day to submit petitions for ballot items and both Amendment 88 (the setback rule) and 89 (the Environmental Bill of Rights) had more than enough signatures to make the ballot — 263,000 total.

Instead of going forward with the two initiatives, Polis and Hickenlooper announced that they would drop them in favor of establishing a committee that would determine Colorado oil and gas drilling regulations. Hickenlooper would appoint the 18-member task force, which will be headed by La Plata County Commissioner Gwen Lachelt (D) and Randy Cleveland, president of XTO Energy Inc., an oil and gas producer.

The compromise also pulls from the ballot two pro-industry initiatives, 121 and 137. And, the state’s Colorado Oil and Gas Conservation Commission (COGCC) would drop one of its lawsuits against the city of Longmont but does not affect a lawsuit filed by the COGCC, the Colorado Oil and Gas Association, and oil and gas producer TOP Operating against the city for their voter-approved ban on fracking.

Despite the announcement, Amendment 88 and the two pro-industry initiatives were still submitted to the Colorado Secretary of State office and neither side has actually rescinded those petitions yet. Polis said Amendment 89 (the Environmental Bill of Rights) did not have enough signatures and was not submitted — even though it had 120,000 signatures, 33,000 more signatures than required. Polis was likely referring to the fact that the petition did not have enough signatures to ensure passage of the initiative. Also, some canvassers told Boulder Weekly that they were asked to stop soliciting signatures days before the deadline.

Then on Tuesday, Polis spoke with more than 100 protestors and fracking activists at the Meadows Branch Library in Boulder. Polis told the crowd that this was not the time for a ballot initiative — 2016 would be better, he said — but that he supports the cause of the initiatives.

“My position is communities should be able to choose whether they have fracking or not,” Polis told protestors. “This will likely mean we will have a fracking initiative at some time. I will stand in support of environmental initiatives that give cities and counties the ability to ban or to have restrictions on fracking in their area.”

Polis said the compromise was made because the pro-fracking ballot initiatives could cause damage to the antifracking movement.

“There were two pro-fracking initiatives: one would deny all severance tax revenue from any city or county that had any restrictions on fracking,” Polis said. “The second was actually more pernicious for the progressive movement at large: Every future ballot initiative would have the fiscal note cost right at the top of the ballot initiative. Frankly a lot of us feared that could pass and set back education funding and set back anything else we want to work on in the future.”

Josh Fox, director of anti-fracking documentary Gasland, also attended the event and said he spoke with Polis earlier in the day, asking him to turn this issue into a national conversation.

“I feel this is the forefront of the environmental movement,” Fox said. “One of the primary places it’s happening is in Colorado and you guys are leading the charge here.”

“We are being excluded time and time again by backroom deal after backroom deal that says, somehow, someone in power can negotiate their way out of the democratic process. I’m seeing this over and over again but I’m seeing citizen resistance becoming stronger,” Fox said.