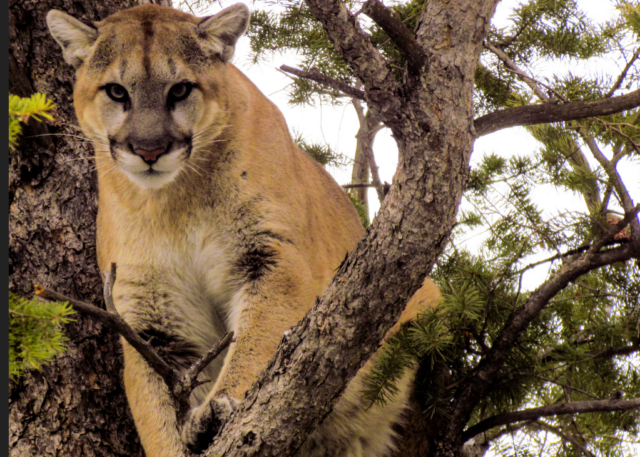 A plan proposed on March 13 by Colorado Parks and Wildlife (CPW) could result in the killing of more cougars.

The plan proposes a change in the numbers of individual cougars that can be killed by hunters relative to models of how many cougars could exist in an area.

CPW released its draft plan after an increase in cougar sightings and conflicts with people. It is based on an assertion that killing cougars might also boost mule deer populations. Though it doesn’t justify the premise that killing cougars reduces conflict, the CPW states it needs to “further evaluate” it.

CPW is proposing the Glenwood Special Management Area (Glenwood SMA) near Glenwood Springs, where it will ask the Parks and Wildlife Commission (PWC), which directs CPW actions, to authorize higher cougar-kill quotas than the rest of the Western Slope.

With regard to this area, CPW wrote in an email that, “maintaining a stable lion population in [the SMA] is not a management objective.”

The plan is a result of CPW’s West Slope Mule Deer Strategy, approved in 2014. The plan directed CPW to develop a new cougar management strategy “incorporating mule deer survival considerations.” The strategy also served as justification for the Piceance Basin and Upper Arkansas River predator control plans, which increased the killing of cougars in those areas supposedly to determine if it would increase mule deer populations.

While CPW has not released results from either of these publicly funded studies, it does note in its proposed draft plan that “efforts to reduce lion predation impacts to mule deer are likely to be expensive and the effect, if any, is likely to be relatively short-lived.”

Some critics assert CPW is more focused on appeasing hunters and ranchers who believe in predator control, especially since much of CPW’s funding comes from the sale of fishing and hunting licenses.

“What it’s turned into is wildlife commerce, not conservation,” says Brady Dunne, a cougar advocate and biologist.

CPW states in its draft document that when hunter demand for mule deer is high, cougars can be perceived as competitors, taking away hunting opportunities. However, determining how many deer can be killed by hunters versus cougars, “is not a decision that science can make. It is a value-based decision, which must be left to evaluation in the social, and not biological, realm.”

The problem with calls

The draft plan would also allow for the use of electronic predator calls, which is currently illegal. These are small devices that can be operated by hand or remotely, and contain several recorded sounds of prey animals in distress, often paired with a visual attractor, like a shiny object. They’re effective, but the Boone and Crockett Club, a nonprofit that advocates for ethical hunting, does not consider them an example of fair-chase hunting.

Electronic calls also make it difficult for hunters to determine the gender of the cougar they kill until it’s too late, which is consequential because maintaining a strong component of adult females in cougar communities is critical to sustainability.

Electronic calls are being proposed not only in the Glenwood SMA, but also in the Uncompahgre Plateau and other areas of the state.

CPW further proposes adding cougar-hunting seasons in the Glenwood SMA concurrent with other hunting seasons. This would mean the cougar-hunting season would begin Oct. 9, instead of Nov. 18. That would be detrimental according to research by Connor O’Malley and others, who found that “delaying mountain lion hunting until November would avoid the denning period for 85% of dens.” In other words, it could destabilize the cougar population. Increased cougar hunting of adult females has been shown to increase the orphaning of cougar kittens and subadults, who are more likely to either die because they can’t survive on their own or become more likely to attack livestock or people.

CPW’s cougar kill quotas propose the percentage of adult female cougars killed be 22% of the total cougars killed annually, and a three-year average of 17% for all cougars killed by people. These quotas are at the higher limit of what CPW’s own research indicates will cause cougar populations to decline, and therefore destabilize cougar communities.

CPW researcher Ken Logan found that a 15% cougar kill quota resulted in an actual kill average of approximately 16% of the population, which was subsequently “associated with a substantial population decline in three years.”

Despite this, CPW states in an email that its thresholds are “not designed to lead to ‘substantial cougar population reductions’”and that the quotas are backed by numerous citations in the plan.

Harvest rates for the first three years, after accounting for human-caused mortality, are likely to be about 11-15%, CPW said.

But Logan’s research indicated that an 11-12% cougar kill quota stopped cougar population decline and stabilized that community of cougars.

Research from CPW’s Mat Alldredge aligns with Logan’s work, stating, “The ability of individual cougars to learn to exploit these environments with minimal human–cougar interactions suggests that maintaining older age structures, especially females, and providing a matrix of habitats, including large connected open space areas, would be beneficial to cougars and effectively reduce the potential for conflict.”

Yet CPW proposes increasing the scale at which kill quotas are determined, claiming that if many cougars are killed in one area, a nearby area will serve as the de-facto source to replenish it.

But researchers show this approach may not accomplish population reduction and would alter cougar communities’ age structure and organization, with younger populations of cougars actually preying selectively on mule deer.

Public comment on the plan ends April 30, with a public presentation on Facebook on April 16 from 3-8 p.m. The plan will likely be voted on at the PWC meeting on May 6-7 in Grand Junction, though it’s unclear if COVID-19 will push back this vote. Comments can be submitted to the PWC at dnr_cpwcommission@state.co.us.