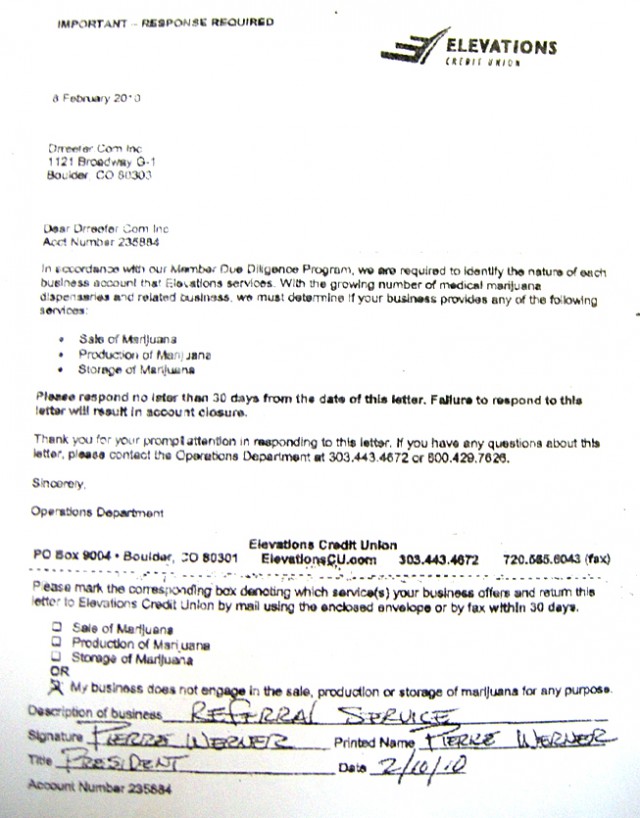 Elevations started sending letters to its commercial account holders in January saying that its “Member Due Diligence Program” requires identifying the nature of each of its business accounts.

“With the growing number of medical marijuana dispensaries and related business,” the letter says, “we must determine if your business provides any of the following services: Sale of marijuana, production of marijuana, storage of marijuana.”

The letter asks each account holder to fill out a form indicating whether it provides any of those services and return it within 30 days — or have their account closed.

“Around December, we got word that some banks were looking at whether they should be doing business with dispensaries, and most were choosing not to,” Elevations spokesperson Ed Beckmann told Boulder Weekly.

But he referred the technical, regulatory reasons behind the decision to Elevations Compliance Manager Cenobio Chacon, who stresses that the decision was not based on moral issues. He compares the medical marijuana industry to online gambling and money service providers, neither of which Elevations does business with.

In the case of Internet gambling, for instance, Chacon says there is a lot of variety in how such operations are run, and some are not legal. The Bank Secrecy Act of 1970 requires financial institutions to help the government prevent money laundering, tax evasion and other criminal activities. As a result, he says, any transactions that are suspected of not being conducted legally must be reported, he says, and the compliance efforts involved in policing clients in such industries as medical marijuana are too costly for many banks to undertake.

He says the state’s Division of Financial Services, which is under the Department of Regulatory Agencies (DORA), has already been making inquiries to banks regarding medical marijuana dispensaries, and “they’re going to put a lot of burden on us.”

No one in the Division of Financial Services or DORA could be reached on Friday because it was a furlough day for state employees.

Pierre Werner, owner of Dr. Reefer, was one of the Elevations account holders who got the letter asking about the nature of his business. He listed his business as a “referral service” and checked the box next to “My business does not engage in the sale, production or storage of marijuana for any purpose.”

“I’m disappointed,” he says of the credit union’s approach. “I have a business license, I’m collecting taxes and I’m paying taxes. When I opened my account, I told them I was a dispensary.”

He wishes Elevations would take the approach that Wells Fargo has taken, which he says is to “grandfather” existing dispensary account holders, but not accept any new ones after a certain date.

Gary Kishner, a spokesperson for Chase, says his bank does not do business with dispensaries due to “financial operational and compliance risk.” Asked what that term means, he told Boulder Weekly, “They didn’t explain that.” When asked if there was someone else in the company who could explain it better, he replied, “I’m not making them available for interviews.”

“Everybody’s in a scramble to find out who will bank with them,” local medical marijuana attorney Jeff Gard told Boulder Weekly. “Is this discrimination? It’s not clear. Every dispensary operates from rights assigned by the patients.”

He says patients who have federally designated disabilities could be seen as victims of discrimination under the Americans with Disabilities Act, as a result of banks refusing to do business with their caregivers, and he is considering filing a lawsuit. Gard believes that the banks’ actions directly affect “the patients’ access to medicine.”

He acknowledges that he is proceeding with caution, because taking on a big bank, “which has far more resources than my poor little clients do,” would put him “in a position where I’ll be fighting with a sling and a stone.”

Asked about Chacon’s assertion that banks are feeling pressure from the state’s Division of Financial Services, Gard says, “It sounds like they are trying to justify a decision that’s already been made. I defy them to produce one document showing that the state is putting that pressure on banks.”

If, indeed, a state agency is applying that pressure, he says, “then the discrimination act would not be limited to the banks but would extend to the state.” Gard says it seems strange that state legislators are discussing taxing and regulating dispensaries while a state agency is pressuring banks to not touch their money. “We need more, not less, transparency,” he says.

The inability to find a bank to store money also raises the possibility that more dispensaries will have to deal in cash, which might increase the number of attempted robberies.

“It’s a law enforcement nightmare if everyone is putting their money in a safe on site,” Gard says.

“That would make us major targets,” Werner adds.

Cmdr. Tommy Sloan of the Boulder County Drug Task Force dismisses the possibility of a possible spike in dispensary burglaries. “These guys are smarter than that,” he says of medical marijuana caregivers. “I would hope they know the risk of keeping cash on hand.”

He told Boulder Weekly that a dispensary owner could always start a limited liability company under a different name and get a bank account. “I think they’ll find a way,” Sloan says.

Gard concludes, “Sounds to me like a good time to start a bank specializing in medical marijuana.”