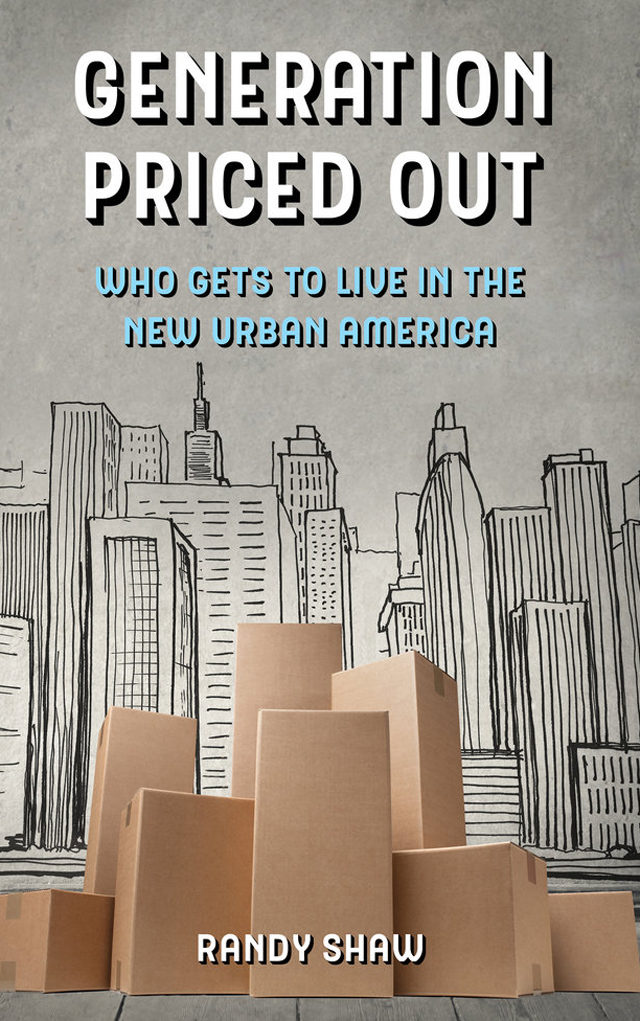 When an Oakland warehouse-turned-artists-collective known as the Ghost Ship exploded in flames in December 2016, it took the lives of 36 people, drawing both public scrutiny and criminal charges against its organizers. But for Randy Shaw, longtime housing advocate and director of the Tenderloin Housing Clinic, which provides permanent housing for homeless single adults in San Francisco, the Ghost Ship tragedy turned the spotlight on what he sees as a national housing crisis.

The questions that started in Oakland led Shaw around the country to cities — some large and some relatively small — facing similar issues. Skyrocketing rents and rising home values, compounded by systemic racial and economic inequality, is pricing many people out of cities. And it’s not only happening in places like New York and San Francisco, which have historically high costs of living.

From Seattle and Portland to Austin, Cambridge, Denver and Boulder, Shaw observes a mostly generational divide between homeowners and renters, baby boomers and millennials, as more and more middle- to low-income people are forced farther and farther away from services, jobs and city centers. In his new book Generation Priced Out: Who Gets to Live in the New Urban America, Shaw focuses on so-called progressive cities, challenging his own boomer generation of Democrats to consider the needs of millennial liberals in urban landscapes.

“Boulder personifies it as strong as any place in the country, I would say,” Shaw says. “Boulder has been so insistent on stopping height and density that they have not provided opportunities for affordability.”

Around the country, Shaw ran into similar issues: city leaders and policy makers talking about prioritizing inclusivity and diversity while not addressing affordability, which Shaw sees as the heart of the problem. For him, what leaders are saying does not match up with land-use policies that would create the kinds of cities where these diverse communities can flourish. At the same time, economic policies are drawing more and more businesses, creating the jobs millenials want while not providing the necessary infrastructure they need to live where they work.

“The supervisors and elected officials who oppose infill housing, they’re not opposing jobs,” he says. “They’re not saying, ‘Wait a minute, we have to stop jobs.’”

Take Boulder for example. In December 2018, employment reached an all-time high, with 196,000 jobs according to the Current Employment Statistics Survey at the U.S. Department of Labor Statistics. This far exceeds the population of the city, which according to the latest estimates is about 107,000, while in all of Boulder County there are only 136,000 housing units, according to the U.S. Census Bureau. It’s a trend Shaw observes around the country: longer and longer commute times, mostly in places without sufficient public transit, which can undermine other progressive policies like environmentalism and fighting climate change.

“You have people in places like Boulder and Berkeley who really pride themselves on being environmentalists. They drive a Prius, they recycle their household waste. They may have solar panels, but then they don’t realize that by not allowing housing in most of the city, they’re requiring people to commute by car, which undermines all the benefits of what they’re doing in their own personal life,” Shaw says. “I think we have an older generation that had a different catalog of issues that they called environmental. They want to save the mountains, they want to save the lakes, they want to save the natural surroundings, but they weren’t really on top of the infill and urban kind of environmentalism, and I think the millennials are more attuned to that.”

Shaw not only lays out the current problems in his book, he also includes a list of 10 solutions he thinks could help move current trends toward affordability. No. 1 is to simply build more housing as population grows.

In order to meet this demand in Boulder, and elsewhere, Shaw argues the need for “significantly more housing of all types in all neighborhoods” — unrestrained building with increased density, larger projects and expedited development without prohibitive policies like exclusionary zoning laws. He encourages the use of public land for affordable housing, strong tenant protections like rent-control and just-cause eviction laws, while preserving rental properties from redevelopment. More than anything, Shaw concludes, the only way to accomplish any of this is to “organize, educate and get political.”

Where he’s discouraged by neighborhood alliances of homeowners that often push back on development, he sees hope in a younger generation of housing advocates who are becoming increasingly vocal in shaping the kinds of cities they need.

“I do think that progress is being made,” he says. “It’s not going at the pace maybe many of us would like, but I think we’re seeing positive change… we’re seeing more people trying to do the right thing.”