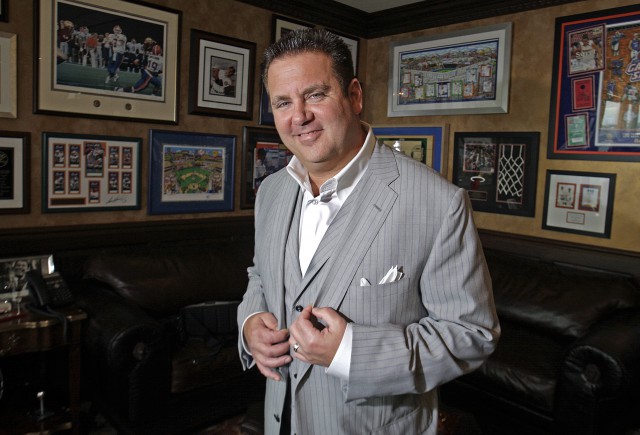 — ,
the South Florida Ponzi schemer extraordinaire, received a 50-year
prison sentence Wednesday after a hearing in federal court in .

U.S. District Judge , an native appointed by President , gave the disbarred lawyer more than what prosecutors requested for his crime as the mastermind of biggest financial fraud.

“I am truly and deeply sorry for what I have done,”
Rothstein said, addressing the court wearing cuffs on his wrists and
ankles. “I don’t expect your forgiveness.”

He apologized to investors he stole from, to his law
firm colleagues, to his firm’s clients, to the court system, fellow
lawyers, to charities.

Rothstein, convicted of running a
investment scam, had said he deserved no more than 30 years because he
pleaded guilty, spilled his guts to the feds and starred in an sting that took down a reputed Italian Mafia figure.

In his sentencing, Judge Cohn called Rothstein’s
investment scam a “tsunami” that he created through his law firm, his
political connections, his charities and ultimately, by forging the
signatures of judges in a legal case between auto magnate and an interior decorator.

Rothstein “created an appearance of legitimacy,” Cohn said. “We all know it was all a facade, a fraud.”

Cohn was particularly disturbed by Rothstein’s forging of documents in the Morse case, which cost the tycoon , stolen by Rothstein.

“He forged these court orders to perpetuate the
Ponzi scheme. There can be no conduct more reviled than a lawyer
perpetrating a fraud on the court.”

Federal prosecutors had sought a sentence of 40
years for the 47-year-old Rothstein. Prosecutors advocated a
significantly lower sentence than the maximum — 100 years — because
Rothstein pleaded guilty and helped them make a case against other
employees in his law firm and recover assets for fraud victims.

Because Rothstein will serve his 50-year sentence in
the federal witness protection program, authorities won’t disclose
where he will be imprisoned.

“This rags-to-riches-to-jail saga is a humbling
reminder of what can happen when greed and ambition run amok,” said
U.S. Attorney . “Rothstein manipulated
and abused the trust of all whom he knew — his friends, family,
business partners, legal colleagues, political figures, and even
charitable organizations — to enhance his reputation, standing, and
power in the community.

“Today’s sentence punishes the defendant for his
thievery, and hopefully brings some sense of justice to the victims of
this massive fraud.”

“While our investigation continues, this chapter in
the Rothstein saga is coming to a close with important lessons for all
to learn,” said , special agent in charge
of the FBI Miami division. “For those that are entrusted with other
people’s money: Do the right thing. For those that entrust people with
their money: Don’t be fooled by the promise of unrealistic returns. The
common element for both is greed — don’t let it get the best of you.”

Rothstein will go down in history as a one-man wrecking ball who destroyed his own 70-attorney law firm, ,
and used it to prop himself up as a flashy player among wealthy
investors, society types, trendy entrepreneurs and prominent
politicians — including Gov. .

Rothstein’s fictitious financial empire crumbled over
weekend when dozens of investors began clamoring for millions they had
invested in his “confidential settlements” of purported employment
discrimination and sexual harassment cases. Rothstein, born into
working-class , family, had fled to in a chartered jet with .

Last week, he wrote in a 12-page letter to the judge
that he contemplated suicide, but stopped himself because it “would
just be one final act of selfishness.”

“And for the first time in five years, I was
completely honest about what I had done and who I was,” Rothstein wrote
Cohn. “From the moment that I decided to return home, knowing that I
would never actually go home again, I have done everything in my power
to right the terrible wrongs of my crimes.”

Visit Web edition on the World Wide Web at http://www.miamiherald.com/