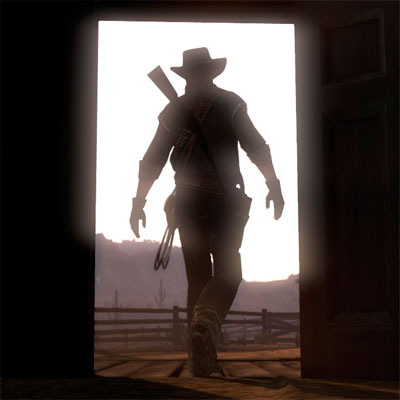 — Ask what Red Dead Redemption is about and the usually loquacious VP of
creative at Rockstar Games pauses for 10 seconds. “It’s America,” he
finally replies. “The birth of modern America. What was gained and what
was lost.”

Some might scoff at the idea that a video game can
tackle such heady themes, but Houser and his brother Sam, the
co-founders of Rockstar, are used to being underestimated. Their label,
part of Take-Two Interactive, is best known for its massively popular
Grand Theft Auto series, which has sold more than 100 million copies
and generated lawsuits, boycotts and legislation because of explicit
violence and sexual content.

The Housers are British immigrants whose critical
eye for their adopted country and embrace of its pop culture tropes is
reflected in nearly every game they make. Recent Grand Theft Auto
(known affectionately as GTA) releases fit comfortably in the tradition
of crime dramas like “The Godfather” and “Scarface” with plots that
comment on the myths and realities of the American dream.

Now Rockstar is moving into perhaps the only genre
that provides an even better backdrop for those themes: the Western.
Red Dead Redemption, which comes out after five
years of development, takes place at the twilight of the Old West, in
1908, when Easterners and automobiles were encroaching on the
previously untamed frontier and the cowboy was fading into fiction. The
game’s main character, , is a recognizable relic: An ex-gunslinger forced into tracking down his old gang in order to save his family.

Red Dead Redemption comes at an awkward time for the Western, as the genre has been all but dead on the big screen since had arguably the last word on the subject in 1992’s “Unforgiven.”

The minds at Rockstar are convinced that what the
Western needs now is to be experienced instead of watched. The company
is known for making “open world” games in which players can go anywhere
and do nearly anything, and Red Dead Redemption is its biggest yet. Its
map spans from a virtual to , from ranch to saloon to burgeoning city to pueblo-filled border town.

“They’re called Westerns, not ‘outlaw’ or ‘cowboy’ films, and that’s an inherently geographical word,” said ,
a fast-talker with a shaved head who cites “The Wild Bunch” and 2005’s
little-seen Australian film “The Proposition” as inspirations. “One
thing games do better than any other media is give you a sense of
place. This is what we consider doing a Western properly.”

Since its founding 12 years ago, Rockstar has tried
to create a major hit besides GTA but has managed only modest success.
The substantial resources invested into Red Dead show the company
believes it can buck history and sell at least several million units at
a pop, but the prospects are far from certain.

“Rockstar has a very odd place in the industry
because there’s an audience who appreciates the way its games criticize
our culture and there’s an audience who just love running around and
blowing things up,” said , author of the
upcoming book “Extra Lives: Why Video Games Matter.” “I think the first
group will love to see Rockstar explore the mythology of the Old West,
but it’s hard to know if the second will find that as interesting.”

Although Houser thinks big picture at Rockstar’s headquarters in , Red Dead Redemption has been designed at the Rockstar San Diego studio, located in a discrete second-floor office in .

On the main production floor, about 200 programmers,
designers and artists were hard at work last month in their cubicles
putting the finishing touches on Redemption. It’s a spiritual successor
to 2004’s smaller scale Red Dead Revolver, which bears only a little of
the Rockstar touch because it was primarily overseen by Japanese
publisher .

Roughly 500 people around the world have contributed
to Redemption over the last five years. By contrast, Activision’s Call
of Duty: Modern Warfare 2, the best-selling game of 2009, was made by
fewer than 100 people in two years.

In an office off the production floor, showed more than 200,000 items he thinks will be critical to Red Dead’s
success: They’re bugs that have been individually identified and fixed.
Some are huge, like characters walking through walls; others are as
seemingly trivial as the size of the moon and the color of dust.

Benzies, the president of Rockstar’s studio that makes GTA games, came to
six months ago in part to bring a perfectionist’s eye to the end of
production. “It’s vitally important that every little thing in the
world is right,” he said, “because the slightest thing that’s wrong can
disconnect players.”

It hasn’t been an easy five years, insiders admit,
with several journeys down paths never finished. It’s difficult to
imagine the final product being much bigger, however, as it takes at
least 40 hours for a single person to complete and hundreds more for
those who pursue optional challenges and play together online.

Because Red Dead Redemption takes place in desolate,
rough country, integrating a hallmark trait of Rockstar’s past games —
the ability to chance upon interesting people and things to do — was a
major challenge. “It would have been contrived to say ‘Here’s another
small town and another small town,'” said producer .
“So we made the natural world alive with bears, coyotes, cougars and
snakes. It gives you that sense of struggle against the wilderness.”

There were numerous other problems inherent in a
Western setting. How do you make things stand out in a world where the
ground, the clothing and many skin tones are brown? Tricks with
lighting and smoke. How do you make objects appear rugged and
sun-warped? Forbid the use of straight lines. How do you make a horse
move as realistically as a car in Grand Theft Auto? Record a real horse
in a motion capture studio.

As with all of Rockstar’s open world games, Red Dead
is divided into missions, specific tasks that advance the story in
small chunks, such as earning a sheriff’s trust by helping him bring in
the local “most wanted.” Marston is just as deadly with his rifle as
GTA protagonists have been with semiautomatics. He doesn’t, however,
engage in any of their controversial sexual behavior. “I’m a married
man,” Marston says early in the game when told about available “female
company.”

“We have just over 500 characters who all have names, family members and jobs,” said , head of art. “You can see a man at in a Mexican market manning the chicken stand and at he’ll go over to the local pub.”

The least defined character in the game, in fact, may be .
Though he has an overarching goal, players define what kind of man he
is and what kind of game Red Dead Redemption is based on how they
handle the thousands of interactive moments that make it up. In one
optional mission, Marston finds a woman being held up at gunpoint along
the side of the road. He can save her, participate in the robbery and
pocket the money, or ignore her and ride off into the sunset.

“The morally ambiguous cowboy is the perfect
protagonist for the style of game we make,” observed Houser. “Sometimes
you can be the hero, sometimes you can be the bad guy, and sometimes
while you’re deciding what to do, a bear comes out of nowhere and eats
someone.”