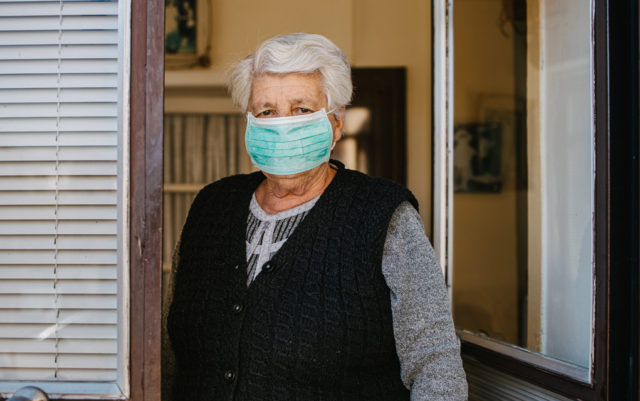 As the state of Colorado begins to loosen stay-at-home restrictions, one place they’ll remain is in senior living facilities across the state. There will still be no congregating, no in-person dining and mandatory health screenings for essential visitors and residents alike. All facilities must have a prevention and response plan filed with the state.

COVID-19 is having an outsize impact on assisted and other senior living facilities across the country. More than 19,600 residents of long-term care facilities have died of COVID-19, according to the New York Times.

And the numbers are similarly extensive in Colorado, where more than 1,200 senior home residents have tested positive for COVID-19, with 340 confirmed deaths — roughly one-third of the total number of COVID-19-related deaths in the state as of May 1, according to outbreak data from the Colorado Department of Public Health and the Environment (CDPHE).

In a press statement, Mark Parkinson, president and CEO of the American Health Care Association and National Center for Assisted Living (AHCA/NCAL), said, “Our profession has been sounding the alarm for weeks and weeks, but we have largely been forgotten by the public health sector. If we are not made a top priority, this situation will get worse with the most vulnerable in our society being lost.”

Parkinson called on states and the federal government to provide priority testing to senior living facility residents and staff members, and to provide more funding to help the industry respond to challenges posed by COVID-19.

“Without access to more testing, nursing homes and assisted living communities are at a severe disadvantage in protecting our residents,” Parkinson stated. “Long-term care facilities, especially ones with COVID-19 cases, need to be able to alert all residents and staff due to the fact that many individuals are not exhibiting symptoms.”

As more long-term care facilities have gained access to testing, more tests are coming back positive from residents and staff members who were asymptomic, unknowingly spreading the disease in the relatively isolated communities.

Frasier, a senior living community in South Boulder, has had relatively few cases, with its first confirmed case on March 25. Since then, there have been a total of three confirmed cases in the community of more than 500 residents and only two probable cases as of May 4. When it comes to the staff, the numbers are similar: two confirmed, four probable (more than the official state count as of May 1).

Frasier’s CEO and President, Tim Johnson, says the nonprofit organization was able to stave off more widespread infection by acting fast. As part of a consortium of 19 other similar communities throughout the country, Johnson has been talking with other CEOs on a weekly basis, and facilities with early outbreaks in New York and New Orleans are in Frasier’s network. This allowed Frasier to benefit from other communities’ experiences and implement protections before the disease had really started spreading in Colorado.

“On a daily basis we’re interacting with fellow colleagues who are truly on the frontline of this and we’re able to get in there ahead of anything that has occurred here at Frasier,” Johnson says. “We ended up being pretty proactive, I think from what we can see now looking back, pretty early in this process.”

Also, being a nonprofit has benefited Frasier, Johnson says, allowing him to make quick, on-the-ground decisions, rather than wait for direction from corporate leadership someplace else. Those decisions included cancelling group activities, dining room service and even in-person staff meetings by mid-March, while everyone interacting with residents have been required to wear masks from the very beginning. Residents are strongly encouraged to wear masks as well. Starting March 16, all independent living residents have been self-quarantining.

“IT’S A CRAZY THING THAT HAPPENS IN PANDEMICS. THERE ARE NEW ADVANCES IN HEALTH CARE, THERE ARE NEW WAYS OF LEARNING HOW TO DO THINGS.” — TIM JOHNSON, CEO/PRESIDENT OF FRASIER

To keep residents connected and properly informed, Frasier is putting out daily communication through videos, printed flyers and weekly calls from management. Johnson says each week he personally checks in with 25 residents, as does all of senior leadership.

Although Johnson says the facility has plenty of PPE, including masks and isolation gowns, testing is still a problem. In terms of testing, Frasier asks the state every week for more, but “they’ve been opposed to any blanket testing,” Johnson says. “We are constantly told that it is not appropriate at this point in time.”

Johnson says that in the midst of all this, Frasier is beginning to plan for the future, how operations might differ in the coming weeks. For example, the dining room will only open to about 50% capacity to account for social distancing and the buffet may never come back as a sanitary precaution. Despite how different the future might look, Johnson is confident the changes will all be for the better.

“It’s a crazy thing that happens in pandemics,” Johnson says. “There are new advances in health care, there are new ways of learning how to do things, we’re seeing it in our [different] technologies, we’re connecting differently, and in some respects, better as a result of that. And I don’t think we’re going to lose those ideas. We’ll embrace those in our programming as we move forward.”

But that doesn’t mean any of the restrictions Frasier has put in place will be lifted anytime soon.

“I’m pleased to report, we’ve had no new cases, but that doesn’t mean we’re not going to get one next week,” Johnson says.
At the higher end of the spectrum (locally), The Bridge at Longmont, operated by Century Park Associates, has had 22 cases of COVID-19 in residents and staff, with 7 deaths, according to state data.

On March 13, Century Park announced it had no confirmed cases of COVID-19, though The Bridge began putting in safety protocols that day, according to Century Park COO Esmerelda Lee. Those measures included administering screening for residents, visitors and associates before entry to the communities, restricting visitation and providing a testing site to staff members “should they want to be tested.”

Two weeks later, on March 28, The Bridge started to “enforce and [make] available masks for all our direct care staff to use while caring for our residents,” Lee wrote in an email to Boulder Weekly. “We also then began suspending communal dining programs and activities as prevention efforts for the safety and protection of the residents.”

At The Bridge, residents live in private units, with communal areas like a dining hall and recreation center. Staff handles housekeeping, laundry and unit maintenance.

“Since the beginning of this pandemic crisis, The Bridge at Longmont, along with every Century Park community, has been working closely with local health departments, local medical professionals and has been following all CDC guidelines,” Lee wrote. “Our mission as a company through this crisis is to communicate, with transparency, all that we are doing to keep residents and staff safe from this virus entering our buildings and containing it if it does.”

CDPHE has offered guidance to long-term living facility providers on how to treat COVID-19 in their communities. It says that communication is critical and that “rumors can spread like wildfire and incorrect information can do a lot of damage.”

In the event a resident exhibits symptoms of COVID-19, facilities are instructed to place the person in a private room, contact their health professional, notify the local public health department and begin contact tracing by finding out who that person may have been in contact with in the last 30 days.

In senior living facilities health officials might know where to look first, given close quarters and communal spaces. And that’s the problem. Especially considering older adults are at higher risk of developing serious complications from COVID-19, according to the CDC. Which is why long-term care facilities are keeping stricter policies for the forseeable future.

“The tendency is for people to drop their guard,” Johnson from Frasier says. “They hear what the governor has done to relax the restrictions on the rest of the state. But senior living communities are a vulnerable population and those restrictions have not been lifted yet.”

As of May 1, Boulder County has 8 facilities with confirmed COVID-19 outbreaks, including health care, skilled nursing, independent living and assisted living facilities, according to data published by the Colorado Department of Public Health and the Environment. An outbreak is defined as2 or more confirmed COVID-19 cases in a facility and is considered over 28 days after the last case was confirmed. Below is a list of cases, probable cases that aren’t lab-confirmed and deaths at each facility that includes both residents and staff. (There have been no instances of death among staff at any of these facilities.)