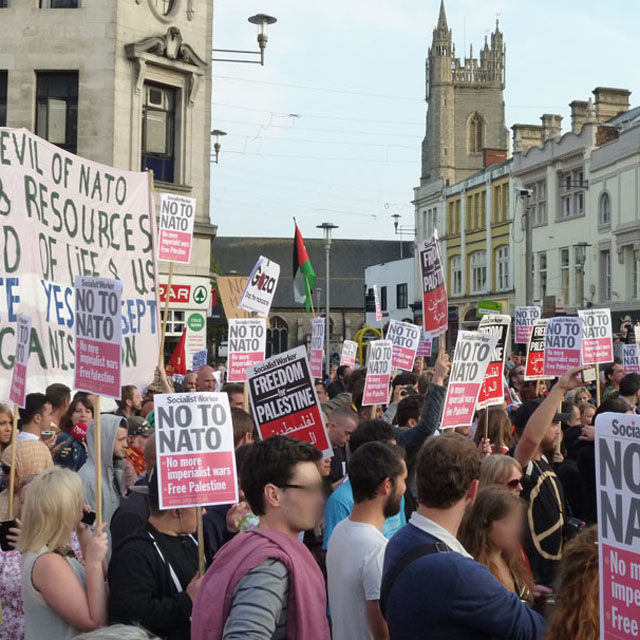 While Americans celebrated President’s Day with a three-day weekend in the U.S., world leaders and international security experts gathered for the Munich Security Conference in Germany. Amid months of policy ambiguity from, first the Trump Campaign and subsequently the administration, U.S. Vice President Mike Pence assured everyone that the U.S. remains committed to the North-Atlantic Treaty Alliance (NATO), despite recent comments from the President suggesting the military alliance is “obsolete.” Pence further challenged other NATO member states to increase their defense spending to meet the obligations of the alliance.

Although some were hopeful that Trump’s previous comments could mean a move away from the intense militarization and nuclear armament of the 20th century, Pence’s speech at the conference in Germany suggested a potential rapid growth in military spending throughout the world. Then, on Monday, Feb. 27, multiple reports emerged that Trump’s proposed budget would increase defense spending by almost 10 percent to the tune of $54 billion.

In many ways, this affirms many peace activists’ fears about the rise of nationalist politics both in the U.S. and in Europe.

“I have sometimes the feeling that the so-called old times are coming back even though we know it’s a total other situation,” says Reiner Braun, German peace activist and co-president of the Switzerland-based International Peace Bureau (IPB). “There are differences but we have an equal situation where we are looking at a big war is again possible.”

Braun grew up in Braunschweig, West Germany, but in relative proximity to the Iron Curtain. While a student in the late 1970s, he joined several peace activist groups protesting the increasing threat of nuclear missiles.

“We really had the feeling in Europe and in my country that there was the danger of a big nuclear war,” he says. “And we were young and we don’t want to die so we engaged ourselves.”

Since then Braun has been involved with many different peace groups and organizations, and has been co-president of the IPB since 2013. The organization, founded in 1891, estimates governments spend a combined total of $1.8 trillion for militaries and armament throughout the world.

“If we can reduce this by 10 percent we can have the money for the sustainable development goals, which were agreed upon at the United Nations in the last year,” Braun says.

In the face of such startling statistics, Braun has been challenging the idea of NATO since the end of the Cold War, advocating instead for an inclusive security policy throughout Europe, one that doesn’t exclude one of the continent’s largest players: Russia.

“The Western countries … never want to have equal relations on the same eye level with Russia,” Braun says. “So they immediately started the enlargement of NATO to the east, which creates a lot of the existing problems today, like Ukraine.”

In the absence of the East/West conflict of the Cold War, new power struggles and conflicts have emerged throughout the more globalized world. And NATO has responded.

“NATO wanted to continue existing after the end of the Cold War era in 1990, and to exist you have to find new jobs to do,” Braun says. “And the new job for NATO was the politics of intervention all over the world. This was the background of being accepted again.”

Rising tensions in the South China Sea, ethnic clashes in parts of Africa, the rise of terrorism in the Middle East and the civil war in Syria, all make the current militaristic landscape increasingly volatile.

Add to this the rise of nationalist rhetoric and far-right political parties fueled by “deeply disappointed people,” both in Europe and the U.S., and “a more consumer-oriented younger generation, which is much more individualistic,” and Braun says the world is ripe for large-scale conflict again.

And although many on the far-Left want to blame the election of Donald Trump for escalating tensions, Braun sees the American president as both a consequence and a promoter of them.

“On the one side, Trump is the result of the globalized neo-liberalistic world of the last 25 or 30 years, with the deep division between poor and rich,” he says. “On the other side, Trump focused on deepening the crisis and the differences and made the danger of a big war even more realistic than it was in the past.”

Moving forward, Braun suggests a politics of friendship in the government sector and the embrace of a “people’s diplomacy” elsewhere to repair the relationship between Russia and the West.

“Peace in Europe is impossible without Russia so we have to look for the common interests,” he says. “When you want to have a friend, you have to look for someone with whom you can drink beer or vodka or wine. States have to look at their interests and find the common ones. These are the basics of politics for peace and security.”

Braun draws from the success of the Helsinki Final Act signed in 1975 by European countries, the U.S.S.R., the U.S. and Canada, which in many ways paved the way for the dissolution of the Soviet Union. The Act, he says, supported the idea of a “people’s diplomacy” or broader engagement between the sectors of civil society in opposing countries.

“We have to develop more and deeper contact from the basics of society and then hopefully we’ll have consequences in the more or less official politics,” he says. “It’s people’s engagement. It’s societal contacts. It’s contact between organizations from churches to trade unions … it’s contacts between schools, scientists and artists. It’s common work together from both sides as much as possible.”

It’s a method he currently advocates as a way of deescalating current conflicts to prevent all-out war between Russia and the West.

“We have to come back to these politics,” he says. “This will not happen from today to tomorrow, but it worked then and hopefully it will work again.”