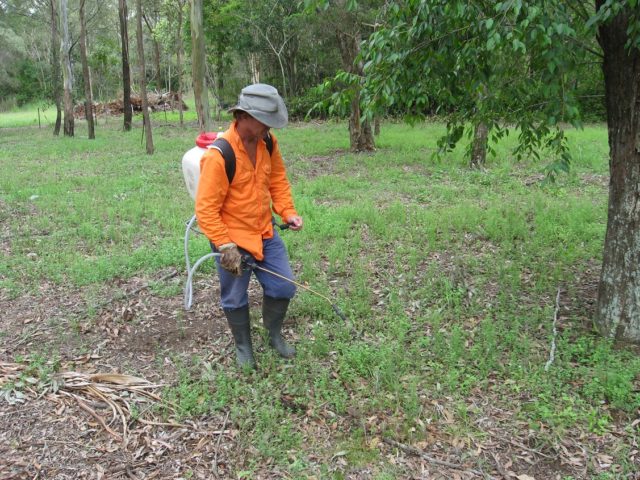 For at least the past 17 years, the residents of Boulder County have been making their opposition to using chemicals such as glyphosate on public lands known to their elected officials. In response to the public’s concerns, the City of Boulder stopped using glyphosate in 2011. But as has been well documented in recent years, Boulder County has not followed the City’s lead. Despite having several County Commissioner elections in the past that were centered around promises to eliminate GMO (genetically modified organisms) crops and thereby the use of glyphosate on the County’s open space lands, these campaign promises have gone unfulfilled. There have been a series of five-year extensions given to the farmers leasing open space lands and, to date, the use of glyphosate on GMO crops continues.

But it’s not just these farmers using glyphosate and other chemicals to manage our publically owned open space. Other popular areas are also being sprayed. Considering the many and massive lawsuits regarding glyphosate and its links to cancer that have been in the headlines in recent days, Boulder Weekly decided it was a good time to take a look at the County’s overall use of herbicides on open space.

Since 2014, Boulder County has applied Roundup, aka glyphosate, along with the herbicide Esplanade, on approximately 1,500 acres of Boulder County open space lands, according to Steve Sauer, weed control supervisor in the Parks and Open Space Department. This number does not include the farmlands with GMO crops. Both of these herbicides are manufactured by Bayer Corporation, which in 2018, acquired Monsanto for $63 billion. Bayer and Boulder County have worked together to fund research conduct by Colorado State University on Boulder County open space lands using these chemicals in an attempt to control invasive grasses, especially cheatgrass.

In March 2016, (as alluded to above) Boulder County Commissioners directed staff to develop a plan for transitioning County-owned agricultural land away from growing genetically engineered crops, and expressed a preference for phasing out the use of neonicotinoids and greatly reducing the use of herbicides and pesticides on County-owned open space lands.

According to a minority report prepared by the Cropland Policy Advisory Group in 2011 and included in the Boulder County Parks and Open Space Cropland Policy, “Boulder County Parks and Open Space lands should ban the use of all pesticides containing glyphosate herbicides on its lands, including croplands, rangelands and other locations. A prompt phase out program of no more than one-year duration should be implemented.” Such a ban, however, was never adopted. In fact, just the opposite appears to have occurred.

Following the aforementioned studies conducted on Boulder County open space lands, in 2016 Boulder County shifted its use of the chemicals from purely experimental to large-scale applications of Esplanade, and in some cases, Roundup, according to Sauer.

This comes at a time when Bayer faces tens of thousands of lawsuits from people in the U.S. who claim Roundup gave them cancer. One California court initially awarded $2 billion to a couple after a jury concluded Roundup caused cancer in the husband and wife. The award has since been reduced to $86 million according to Bloomberg which also reported that Bayer is proposing to pay as much as $8 billion to settle more than 18,000 lawsuits over Roundup, a claim later dismissed by a Bayer mediator.

According to the Environmental Protection Agency product label for Esplanade, aka indaziflam, among its environmental hazards is toxic to fish, aquatic invertebrates and plants. “This product may contaminate water through spray drift or runoff,” the label states, adding a warning to follow directions for use to prevent such spray drift and runoff. The label also says Esplanade may impact surface water quality due to runoff of rainwater. “This is especially true for poorly draining soils and soils with shallow ground water,” the label states. “This pesticide has properties and characteristics associated with chemicals detected in groundwater,” the label states, and “may leach into ground water if used in areas where soils are permeable, particularly where the water table is shallow.”

According to Therese Glowacki, Boulder County resource management manager, Boulder County takes all these label advisories very seriously and are very cautious when they’re applying such chemicals not to inadvertently spray it on streams or an irrigation canal. She also adds that the County doesn’t spray when there are high winds to avoid drift.

Derek Sebastian, Bayer vegetation management area sales manager for Colorado, Wyoming and Montana, who completed his PhD at CSU working on the Boulder County research projects, says Roundup is a component of what they do in terms of invasive grasses, but not a very big component, adding, “it’s all the benefits that we’re seeing. That was the research that was done through CSU; was quantifying the pollinators coming back, the wildlife habitat restoration, the native habitats following these treatments to eliminate the invasive annual grasses in particular.” Sebastian says it’s really those benefits that they’ve been trying to quantify over the years with the research they’re doing. These are the same reasons Boulder County representatives use to justify the County’s ongoing use of the herbicides on taxpayer-purchased land.

A 2016 research report by Sebastian shows that two of the treatments for that study in Boulder County were comprised of herbicide mixtures, including Esplanade, Roundup, and other chemicals.

Dr. Harry Quicke, Bayer western stewardship manager, says Bayer’s main research involves Esplanade, “and that’s where the story is and how successful it is at restoring these habitats.”

But as much as Bayer, Boulder County and CSU tout the benefits of their herbicide applications, it appears they are not specifically monitoring for potential negative environmental impacts. When asked about Esplanade’s warning label, which states the product is toxic to fish, aquatic invertebrates and some plants, Quicke responded he has approximately 100 trials looking at Esplanade for invasive annual grass control across the entire West, “And no, we don’t look at all those aspects every time we put out a trial because it would be totally cost prohibitive,” he says.

Sauer says Boulder County applicators are following label guidance in their applications. But again, the County is not specifically monitoring for any potentially negative impacts associated with the studies and large-scale treatments. When asked whether there were any studies looking specifically at animal health in the study areas, Sauer said the only monitoring they can actually say they’ve done associated with the Bayer products is anecdotal.

However, Sauer says some of the benefits of the herbicides have included increased pollinator and wildlife habitat, and reduced wildfire risk; benefits echoed by the Bayer representatives. He notes one of the studies that he says showed that by eliminating cheatgrass, it increased the amount of nectar that was out there for the pollinators and also increased the quality of nectar. His statement appears in line with Boulder County’s Comprehensive Plan, which aims to make preservation of environmental and natural resources a high priority in land use decisions. State statute also requires all counties to develop and enforce weed and pest management plans on all unincorporated lands under county jurisdiction.

But when it comes to pollinators, there may be a problem.

Among Roundup’s potential negatives, especially for those species supposedly helped by the use of herbicides and reduction of invasive grasses, like bees, is the speculated harm it is causing. A Sept. 2018 study published in the Proceedings of the National Academy of Sciences by researchers from the University of Texas-Austin, found that Roundup may be indirectly killing bees because it destroys specialized gut bacteria in bees, leaving them more susceptible to infection and death from harmful bacteria. A press release for the study states, “More than a decade ago, U.S. beekeepers began finding their hives decimated by what became known as colony collapse disorder. Millions of bees mysteriously disappeared, leaving farms with fewer pollinators for crops. Explanations for the phenomenon have included exposure to pesticides or antibiotics, habitat loss and bacterial infections. This latest study adds herbicides as a possible contributing factor.”

One of the studies conducted by CSU on County open space land in 2018 states that results indicate that controlling cheatgrass with treatments of Esplanade, “significantly increases flowering plant richness, diversity and abundance.” However, their observational studies were limited to a few hours each day resulting in low recordings of pollinator visitation rates, according to the research report.

To put it plainly, increasing pollinator habitat and nectar quality doesn’t make any difference if the same chemicals used to do so harm or kill the actual pollinators, which is what some of the research is indicating.

When asked about the ongoing and even increasing use of herbicides on open space lands, Boulder County Commissioner Elise Jones says, “Glyphosate … is a problematic chemical. We want a pathway that really minimizes the use of pesticides across the board.” And even as she says the County is moving to reduce its use of agricultural chemicals, “[t]here’s also direction around environmental restoration, protection of wildlife and wildlands.” Cheat-grass is a huge problem too, she says. “Sometimes our direction [sic], in terms of County roles, don’t necessarily neatly align because there’s not really a good answer to cheatgrass.”

Alternatives to industrial herbicides for combating cheatgrass do exist, however. For example, Ann Kennedy, a soil scientist with the Agricultural Research Service of the United States Department of Agriculture, has discovered naturally occurring soil bacteria that inhibit the growth of cheatgrass’ deep root system. And according to a report in The New York Times, those bacteria leave native plants untouched.

Open space areas that have been treated by Bayer-manufactured herbicides include the Ron Stewart Preserve at Rabbit Mountain; Indian Mountain; Hall Ranch; Colp; Heil Valley Ranch; Mayhoffer; Kenosha properties, and non-grazed areas of the Southeast Buffer. Boulder County also uses Roundup on parking lots in some instances, according to Sauer.

Jones says even though it’s a goal to reduce chemical use, “[Boulder County] staff are managing lands trying to use all the tools in the tool box to achieve a myriad of goals.” And because there’s not an outright ban on it, Jones says, staff are using “tools” like Esplanade and Roundup, “to try to manage ecosystems.”

Jones was called away and had to end the interview when asked her thoughts about the aforementioned lawsuits against Bayer.

Some critics believe that the primary reason Boulder County hasn’t moved away from chemical management of its open space lands is because Boulder County staff simply don’t see it as a problem. According to Dr. Mary Mulry with the group, GMO Free Boulder, “We have a County open space staff that has openly said that they support chemical agriculture,” she says, “in spite of the fact that the majority of the public in polls and forums have said that they want non-chemical agriculture, they want regenerative agriculture.”

She continues, “Our group feels that the only way to ensure that glyphosate will not be applied to public open space is to convert it all to organic because there’s no other way to control it,” she says, “We don’t have the time any more to wait.”

With research now showing that most Americans have glyphosate in their bodies because of its incredibly pervasive use over the past two and a half decades, and in light of the recent lawsuits and the herbicide having been declared a likely human carcinogen, perhaps it’s time for Boulder County to stop adding more of these chemicals into our environment.

And yet the spraying continues.