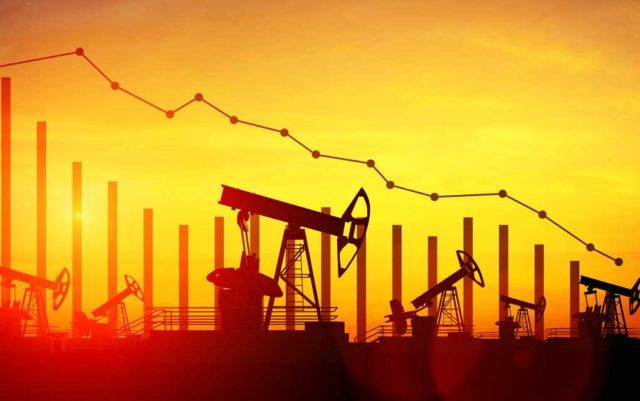 On April 21, crude oil prices dropped below $0 per barrel, meaning companies were paying others to unburden themselves from oil contracts. The numbers have since fluctuated, and forecasts are murky. Natural gas prices have experienced similar volatility.

So what does that mean for the oil and gas industry in Colorado? And what for the people who live near operations and are concerned about the long-term environmental impacts?

2020 has not been kind to the industry so far (as opposed to, well, no one). Whiting Energy, in North Dakota, filed for bankruptcy on April 1. Furloughs and layoffs have been reported at Colorado oil and gas companies, and stock prices have dropped dramatically.

“Investor confidence in the industry is low,” says Morgan Bazilian, director of the Payne Institute for Public Policy at the Colorado School of Mines. “Share prices were already falling prior to the pandemic and they’ve dropped precipitously. The biggest oil and gas producer was Andarko, now Occidental. Their share price went from something like $60 down to $17. … We’ve already seen that going forward this is not a blip. This is a massive detrimental time for the industry.”

Blame for the drop in oil prices is laid at the feet (by industry members and some experts) on the refusal of companies overseas to cut production, combined with lower demand during worldwide stay-at-home orders. Locally, some have claimed that regulatory uncertainty caused by SB 181 has impacted their bottom lines.

Dan Haley, president of the Colorado Oil and Gas Association (COGA), says though the market drop is impacting the industry, the factors that led to its bottoming out may not be long-lasting.

“Last week’s drastic price drop reflected an oversupplied market, a decrease in demand driven by the coronavirus, and an emerging storage issue as May contracts were expiring,” Haley says. “However, I would argue that the long-term fundamentals of the industry are sound.”

But another contributing factor — some say the largest — is that the oil and gas industry is heavily indebted. North American oil and gas companies currently own more than $200 billion in debt. Meanwhile, depending on the region, estimates are that companies need oil to be make around $30-$50 per barrel to be cash-flow positive, and hundreds are at risk of bankruptcy if prices dip below $20 per barrel for a sustained period of time, says Micah Parkin of 350 Colorado, a environmental advocacy group.

“This has always been an unsustainable industry,” Parkin says. “They’ve never had one year of positive cash flow in aggregate whether they were high oil prices or low prices. They’re called zombie companies because they’ve been surviving on borrowing just to service the current interest of debt. They’re not even able to pay down their debt.”

Low bond rates and the fact that Colorado has one of the lowest effective severance tax rates (a tax on companies that mine or drill natural resources) in the West have long undercut industry claims about its benefits (local taxes and employment) to communities. But Parkin is concerned that with companies going bankrupt, or at risk of doing so, there will be less money in the coffers for communities to clean up the 80,000 wells in the state once they are no longer producing enough for a company’s portfolio.

“We’ve been deeply concerned before the downturn in oil prices that they were going to go bankrupt and we’re going to have to clean up the mess,” Parkin says. “We were hopeful we could increase bonding and severance tax [with SB 181], but none of that has happened. … We’re going to see a lot of bankruptcies in the next year. Our communities aren’t in a very good position. We have no nest egg that’s sufficient to take care of capping those wells.”

It varies, but cost estimates for capping a well range from $10,000 per well to hundreds of thousands of dollars. And research from Cornell University indicates capped wells are liable to leak, and that they need to be recapped at least every 20 years. Estimates for cleaning old wells across the country skyrocket, cumulatively, into the billions.

Given the glut of energy supplies, 350 Colorado is circulating a petition asking Governor Jared Polis to halt fossil fuel extraction in the state during the pandemic. If not, there is also a concern that companies will resort to flaring, that is, burning excess natural gas when there is no market for it, despite the release of greenhouse gasses and general wastefulness.

Bazilian says the disruption in the energy sector may have long-lasting impacts, but cautions that it’s too soon to say for sure.

“Anyone who tells you anything with confidence is not saying anything useful,” he says. “You will definitely see permanent job losses to some degree. You will see company acquisitions and companies going out of business. You probably won’t see, even if there’s a rebound in a U shape or a V shape, …  the kind of confident, long-term growth that the industry had been relying on and investors had been relying on. I think you have a long-term change in the industry that’s going to be very different from how they expected it to be a couple years ago.”

“We’re now starting to see existing wells shut-in in addition to the slow down in new drilling,” adds Bernadette Johnson, vice president of strategic analytics at Enverus, a tech company that provides tools to the energy sector. “The market is significantly over-supplied right now as a result of reduced travel and stay-at-home orders.  Expect to see prices below $20 through May and likely into June or until demand comes back.”

One should keep an eye on how lawmakers handle the bottoming out of oil prices. The Trump administration earmarked $3 billion in the CARES Act for energy companies before Democrats pulled it out. And though SB 181 was supposed to empower local communities to ensure oil and gas extraction was done with public health and the environment as its foremost priority, Parkin laments that the Colorado Oil and Gas Conservation Commission (COGCC) has yet to make state rules that reflect the intention of that legislation. The COGCC announced April 29 it will not begun critical rule-making until a new set of commissioners is seated on July 1. Rules are tentatively set to take effect in November.

Any optimism that the drop in oil prices might deter fracking from entering Boulder County should be tempered, as well. Bazilian points out that Crestone was one of the first companies to partner with the Payne Institute and its data resources on technology that continuously monitors air toxin releases from oil and gas sites. That is, the downturn may not impact companies as much if they’re already invested in ways to monitor their environmental and social impacts.

Considering the “pressure on these companies not just from economics but also from the need to play a positive role in a low-carbon energy transition, responsible gas is one thing that those operators are going to be looking at very seriously,” Bazilian says.

Parkin points out that all things considered, continuous monitoring is a small benefit that should be included in the state’s oil and gas rules for all wells and that it should not hasten the drilling of Boulder County.

“For that to be a selling point to bring fracking into our community is ridiculous,” she says.

Correction: On earlier version of this story erroneously quoted Morgan Bazilian as saying Occidental stock prices per share were down to $7, when he actually estimated $17.