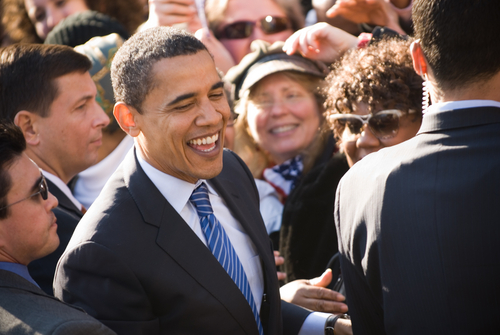 According to a new Rasmussen poll of likely voters, 56 percent of those surveyed favor legalizing marijuana and regulating it like alcohol. That might turn into something of a problem for the current president of the United States, who according to a new biography was a serious stoner in his high school days.

Indeed, if the biography, Barack Obama: The Story by Pulitzer Prizewinning Washington Post writer David Maraniss, is accurate, calling Obama a serious stoner is an understatement. Smoking pot seems to have been at the center of his high school social life.

Obama’s circle of high school buddies dubbed themselves The Choom Gang, “Choom” being a Hawaiian slang term for smoking marijuana.

One Choom Gang member had a Volkswagen microbus that they called the Choom Wagon, which functioned as a purple haze-filled clubhouse. At Obama’s instigation, the gang would smoke in the van with the windows rolled up so they wouldn’t waste any pot. And when the joint was finished “they tilted their heads back and sucked the last bit of smoke from the ceiling.”

According to Maraniss, Obama insisted that the Choom chums practice “TA,” or “total absorption,” meaning that they didn’t exhale their tokes prematurely. If they did they were penalized by missing a turn the next time the joint came around.

In the section of Obama’s high school yearbook where students could thank those who helped them along the way, Obama thanked “Tut [his grandmother], Gramps, Choom Gang, and Ray [the older guy who hung around with the gang and sold them pot] for all the good times.”

In other words, the Choom Gang was Obama’s own little 4/20 club.

Now then. The fact that Obama smoked pot is not new information. He acknowledged it in his 1995 book Dreams of My Father, in which he wrote that he had smoked “weed” and done “maybe a little blow.”

So
why should anyone care now? Well for openers, since Obama took office
40 months ago, approximately 2 million Americans have been arrested,
and in many cases jailed, on his watch for doing the same thing Obama
did — buying, possessing and using marijuana.

I’ve
never seen a poll of the political preferences of pot-smoking voters
in 2008, but I’d be willing to bet you, uh, $420, that Obama won that
demographic in a landslide. But whenever voters raise the subject of
marijuana legalization with Obama, the First Choomster consistently
spits in their faces, refusing even to entertain questions on marijuana
reform, let alone show any interest or sympathy for the cause.

Which
is contemptible. Just how contemptible was neatly summarized by radio
talk show host Penn Jillette in an on-air rant a couple weeks ago
that’s worth quoting at length:

“…
Do we believe, even for a second, that if Obama had been busted for
marijuana — under the laws that he condones — would his life have been
better? If Obama had been caught with the marijuana that he says he
used, and ‘maybe a little blow’ … if he had been busted under his laws,
he would have done hard fucking time. And if he had done time in
prison, time in federal prison, time for his ‘weed’ and ‘a little
blow,’ he would not be president of the United States of America. He
would not have gone to his fancy-ass college, he would not have sold

books
that sold millions and millions of copies and made millions and
millions of dollars, he would not have a beautiful, smart wife, he would
not have a great job. He would have been in fucking prison, and it’s
not a goddamn joke. People who smoke marijuana must be set free. It is
insane to lock people up.”

The
reason politicians like Obama have been able to skate on the marijuana
issue is that pot smokers have rarely judged candidates on the basis
of their stands on marijuana legalization. However, that may be
changing. Most recently, a candidate for Oregon attorney general got
blown out when he promised to gut the state’s voterapproved medical
marijuana law if elected. Two years ago, another anti-marijuana showboat
lost a race for California attorney general.

Obama
isn’t going to lose very many votes to Mitt Romney over pot. But
Romney isn’t the only candidate running against Obama. Former New
Mexico Governor Gary Johnson, who has advocated marijuana legalization
for years, has secured the Libertarian Party nomination for president,
and will appear on the ballot in all 50 states.

A recent poll showed Johnson getting 7 percent of the vote.

If
the election turns out to be as close as many observers think it’s
going to be, the shift of a few percentage points of the vote from Obama
to Johnson in one or two battleground states might be enough to decide
the outcome — much like Ralph Nader winning more than 70,000 votes in
Florida in 2000, most of which would have otherwise gone to Gore, put
Bush in the White House.

Obama’s
brazen hypocrisy on marijuana, together with his consistently cavalier
treatment of those favoring legalization, is the sort of thing that
could move the needle enough to cost him the election.