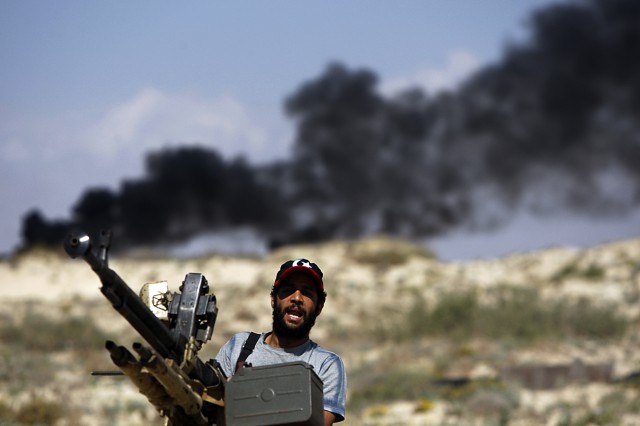 Now that’s my kind of hope and change.

I don’t know how he did it, but somehow Obama managed to extract a resolution from the U.N. Security Council authorizing the use of force in Libya.

He also managed to extract a resolution from the Arab League supporting (at least fleetingly) the idea — and got several Arab states to participate in enforcing the no-fly zone authorized by the U.N. resolution and to help pay for the operation.

What’s more, he managed to create a coalition not just of the willing but of the willing and eager to use force — with France leading the charge. It is a diplomatic achievement of the first order, and Team Obama deserves full credit for it.

Naturally, the Left is beside itself.

Dennis Kucinich is using the “I” word (as in “impeachment”). Michael Moore is tweeting like a 300-pound canary that Obama’s no better than Bush. (Strange, isn’t it, how the people who perennially condemn the United States for seeking out and shoring up dictators always seem to go apoplectic whenever the United States sets out to get rid of one.)

Regardless, Obama stands to lose more politically by failing to get rid of Gaddafi than he stands to lose by pissing off the Democratic Party’s Chomskyites.

If the Libyan rebels were to have been overrun, and they were within hours of being overrun when the Security Council finally acted, Obama would have been indelibly defined as the president who, through detachment, disinterest, delay and timidity, lost Libya and enabled the sort of massacres that would make Srebrenica look like a walk in the park — and that narrative would become a central part of next year’s Republican campaign.

That would be far more devastating in the 2012 election than estranging the anti-war left. Leaving a delusional tin pot thug like Gaddafi in place when America could get rid of him without breaking a sweat would be taken as smoking-gun evidence that Obama is a wimp who doesn’t know how to use force. Americans aren’t very forgiving of presidential candidates they conclude are wimps, as Adlai Stevenson, Michael Dukakis and Jimmy Carter found out.

However, the real downside with letting Gaddafi win is that the first thing he will do is go looking for new allies, and it doesn’t take a genius to figure out who his new best friends will be — Iran and its Syrian client. If there’s any doubt about this, the fact that Gaddafi’s jets are already being flown by Syrian pilots should dispel it.

Letting Gaddafi win means it is an odds-on bet that Libya will be turned into a second Iranian terror base in the Levant (after Syria), and one with its own petro-dollar revenue stream at that. The prospect of that happening probably verges on the unthinkable for both the Sunni Arab world and Europe with its 20 million strong Muslim minority, which may explain why both the Arab League and the Euros endorsed a no-fly zone.

But just as there are downsides to letting Gaddafi stay, there are upsides to getting rid of him.

Getting Europe to man up and take the lead in de-Gaddafizing Libya means America can again look at its NATO allies as allies instead of codependents.

Getting rid of Gaddafi puts the Arab and Muslim world’s remaining kings, godfathers and presidents-for-life on notice that there is only so far they can go in putting down popular revolution. To be sure, the international community may not be able to do in Iran what it is doing in Libya — not immediately at any rate — but the precedent has been set that democratic nations will intervene in the internal affairs of tyrannies on behalf of democratic revolutionaries, especially when it looks like the revolutionaries are in imminent danger of being massacred. That will serve to give the popular uprisings that have been sweeping the Arab and Islamic worlds an enormous infusion of energy and credibility.

And getting rid of Gaddafi holds a big upside for Obama politically. That’s because the ones who will really be left reeling by this are the Republicans. Up until now the Republicans have been having great success in defining Obama as a doctrinaire liberal with no understanding of how to handle money, conduct diplomacy, or use force, who in the name of internationalism is endlessly apologizing to America’s enemies, denigrating American exceptionalism, and betraying America’s friends.

But if Obama takes down Gaddafi, he will have made his bones, and that dog will no longer hunt. The Libyan affair will have shown that Obama can competently do diplomacy, and do it on his own terms at that. It will have shown he can build coalitions and use force prudently and successfully.

It would also show he’s a lot more engaged, and a lot tougher, than the GOP would have you believe, and that in turn just might re-energize his ability to move his domestic agenda. It would leave a lot of Republican talking points looking more than a little threadbare. All-in-all not a bad place to be going into a tough election.