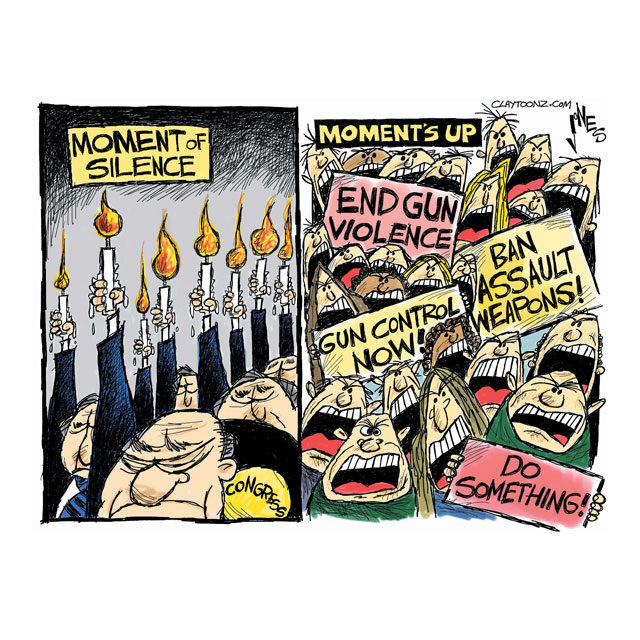 After the horrific shooting in Orlando, there are some facts we might want to consider:

• The National Rifle Association (NRA) defends the right of everyone — including terrorists — to obtain, possess, load and carry assault weapons.

• Many members of Congress take contributions from the NRA — 261 in the 2012 cycle, for example (nearly all Republicans).

• Assault weapons are one of the most common denominators in mass shootings.

• Congress refuses to ban assault weapons or even pass seriously restrictive laws on their possession.

• President Obama has now delivered 15 post-mass shooting addresses to the nation. Almost every time he asks us to make gun control an election issue.

While almost nothing qualifies as the single issue determining how the wise voter chooses, the priorities of our opinions are critical. If we cannot make the assault weapon ban — the single most commonsense step with which we can begin — a top or near-top priority as we question our candidates, then we are simply derelict. Automatic handguns, assault rifles -— these are used to commit evil acts from coast to coast, from north to south, in our besieged nation. We let them die in Columbine high school. In Springfield, Oregon. At Virginia Tech. Sandy Hook. San Bernadino. Umqua Community College in Oregon. In the AME Church in South Carolina and in many more places — 175 such mass shootings just in this year so far.

We seem to be a nation quivering in fear and hoping to placate our fear by being prepared to annihilate all comers, but this means instead that we enable more attackers rather than being prepared to handle them. The Orlando shooter killed 50 outright with more in the hospital fighting for their lives. He wasn’t stopped for more than three hours, despite a highly militarized SWAT team, and despite a highly permissive Second Amendment and a heavily armed populace.

It is time to end this experiment with transmogrifying the entire U.S. into Tombstone Territory with everyone armed to the teeth, prepared to either be a bad guy or take out a bad guy. It is not working. It is time to try learning new relational skills, new competencies that can de-escalate conflict, that can help those who are mentally ill, that can disarm those who might come in proximity to our children, to our friends, to our family members. These skills are not rocket science and are studied to make emergency room personnel more effective, to enable mental health workers to be safer without weapons. This is available and is so much more adaptive than our hyperarmed, aggressive culture that breeds more and more of these utterly avoidable tragedies.