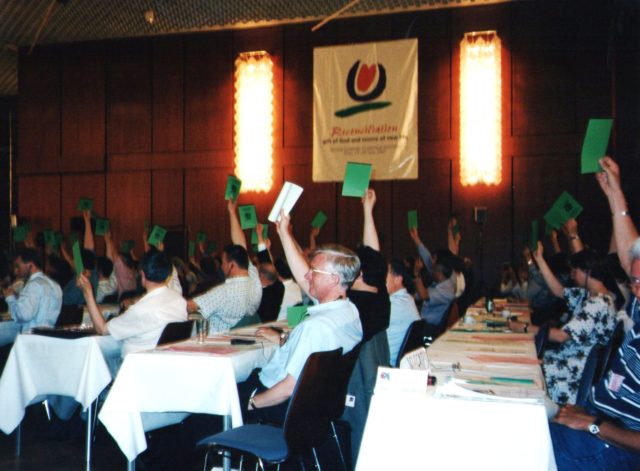 The Intercept said it was “a remarkable display of grassroots power.” In These Times said it was “the most radical development yet” in the national efforts to move the Democratic Party leftward.

On Saturday, March 24, the Denver County Democratic Assembly voted to endorse an amendment to the official platform of the Democratic Party of Denver. The preamble of the platform now reads:

“We believe the economy should be democratically owned and controlled in order to serve the needs of the many, not to make profits for the few.”

How did this happen? Fifteen members of the Denver chapter of Democratic Socialists of America (DSA) had been elected as delegates in the caucuses. They circulated the proposed amendment as a petition to the Platform Committee. They quickly gathered the needed delegate signatures to bring the amendment to the floor. There was some opposition but an overwhelming majority of the nearly 1,000 delegates raised their voting cards in approval. (Watch video here: tinyurl.com/yd8o27sh)

The socialist statement is based upon the original Clause IV of the British Labour Party’s constitution, which advocated for common ownership of the means of production.

Kaitlin Peterson, Denver DSA treasurer and delegate, says the passage of the amendment “shows that the success of Bernie Sanders and his message wasn’t a fluke. People sincerely want a more democratically controlled economy and they are aware that many of the social injustices we see today are because of the power that is given to corporations under our current political system. The Democratic Party establishment needs to sit up and pay attention to this if they want to survive.”

Another DSA delegate, Jake Douglas, tells me that none of the DSAers really expected the amendment to pass. They considered pushing some platform planks favoring concrete proposals such as municipal Wi-Fi or public banks. But they decided to raise the question of democratic socialism in order to provoke deeper debate and discussion of social problems. They felt that rank-and-file Democrats might be receptive to such dialogue. As it turned out, they were more than receptive.

Douglas is 25 years old and is helping to organize a union at his workplace. He describes himself as “a stereotypically downwardly mobile millennial” who is disturbed by what is happening in American society. He says, “We have a booming economy in Denver but working people are dealing with stagnant wages, rising rents and unaffordable health insurance.”

He joined DSA after Trump was elected. “The center can’t hold,” he says. “The candidate who was considered the most electable lost. We got a xenophobic racist and rapist as president. The centrists can’t figure out how to be relevant to working people.”

All 15 Denver DSAers are delegates to the Colorado Democratic Party’s State Assembly on April 14 in Broomfield. They hope to add the socialist statement to the state’s Democratic Party platform. They will also be there to support Bernard Douthit in the state treasurer race and Julie Gonzales in her bid to be the Democratic candidate for the District 34 state Senate seat.

The chapter’s chair, Kristofer Dubbels, says the group will “continue our efforts both to bring radicals into the Democratic Party and to radicalize everyone who is already there. A lot of people agree with us already and just need to be told they aren’t alone.”

DSA is the largest and fastest growing socialist group in America. Most of the new members are in their 20s and 30s. Many are running for office and quite a few are getting elected. In addition to Denver, there are chapters in Boulder, Fort Collins, La Plata County (Durango) and Colorado Springs. Most of them want to be active in promoting progressive social change. For example, Boulder DSAers are involved in a number of activist projects such as creating a tenant union, organizing resistance to fracking and planning a public Medicaid signup event for those who are eligible but have not yet gone through the process.

DSAers want to establish an openly socialist presence in American communities and politics. But much of the time, members work in coalition with progressives who aren’t socialists. As national DSA leader Joe Schwartz put it:

“As democratic socialists, we enter coalition efforts with no preconditions that our allies embrace our socialist politics. But we engage in these politics as open socialists — we will be called socialists whether we choose the name or not. Anti-socialism remains the most profound anti-democratic ideology in the United States. Whatever the struggle — be it for a humane, efficient national health care system or for public investment in child care — the right red-baits the proposals as ‘socialist’ and thus forbidden.”