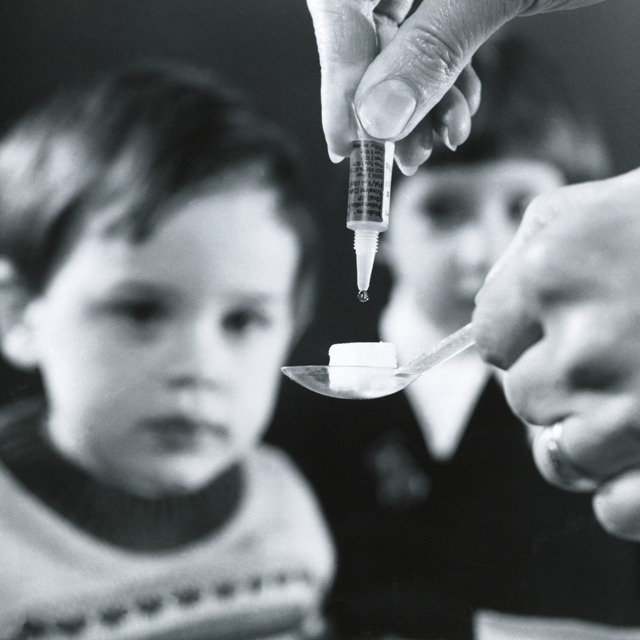 The Trump administration is calling its push for a coronavirus vaccine “Operation Warp Speed.” If you don’t find the name cringe-worthy, you’re not old enough to remember the Cutter incident.

Back in the 1950s, the disease that terrified the country was polio, aka poliomyelitis, aka infantile paralysis. The disease could kill you, but its real terror lay in its ability to leave its victims paralyzed, often permanently. While it frequently struck children (thus the name infantile paralysis) its most famous victim was President Franklin Roosevelt, who even after years of therapy could barely walk.

So when it was announced in April 1955 that a polio vaccine developed by Dr. Jonas Salk had been proved effective in tests on two million school children, the country was overjoyed — and the government did everything it could to have the Salk vaccine produced at, uh, warp speed.

It did this by giving several pharmaceutical companies licenses to make the vaccine, one of which went to Cutter Laboratories, of Berkeley, California. The company, which had been founded in 1897 by Edward Ahern Cutter, was not a fly-by-night operation. Its products had included an anthrax vaccine and hog cholera vaccine. During World War II, it produced penicillin.

The Salk polio vaccine was a dead virus vaccine. It has since been displaced by the Sabin vaccine, which uses attenuated live virus and can be given orally. But in the spring of 1955, the Salk vaccine was the best medicine had to offer.

So companies like Cutter Labs were producing and shipping it as fast as they could. Here’s how Wikipedia succinctly describes what happened. Although I was not yet 13 at the time, the description squares with my memories.

Heads rolled in the federal government. Oveta Culp Hobby, secretary of Health, Education and Welfare (today the Health and Human Services Department) resigned. So did Dr. William H. Sebrell Jr., the director of the National Institute of Health (NIH).

A Congressional inquiry in June 1955, two months after the incident concluded that Cutter’s production methods were sound, but that the NIH’s Laboratory of Biologics Control hadn’t exercised proper scrutiny and oversight. The lab had received advanced warnings of problems, and one staff physician, Dr. Bernice Eddy had reported to her superiors that some inoculated monkeys had become paralyzed. She even sent them pictures. Sebrell swept the warnings aside.

Lawsuits ensued, of course. A jury found Cutter not negligent, but liable for breach of implied warranty, and awarded damages. Subsequent cases brought against Cutter and three other companies that had problems completely inactivating the virus were settled out of court.

The lesson here for Operation Warp Speed is that a rush to get a vaccine out the door can have fatal consequences. And in the case of the coronavirus vaccines under development, the risks are inherently larger than with Cutter’s Salk vaccine. That’s because the coronavirus vaccines are going to be shipped without a couple of years worth of human testing. A protracted testing period doesn’t just provide information about the safety and effectiveness of a vaccine. It also provides the vaccine producers and government regulators with time to develop robust product safety procedures. Can that be done at warp speed? Maybe, but warp speed seems to be an open invitation to a new Cutter Labs incident.

The feds should forget about warp speed and avoid cutting corners, especially when it comes to vaccine production.

And especially since there is some evidence that an existing vaccine, the Sabin oral polio vaccine, may be effective against coronavirus. Dr. Robert Gallo, codiscoverer of the HIV virus as the cause of AIDS, recently authored an op-ed in the Wall Street Journal stating he and a colleague believed the Sabin vaccine is “known to be a potent stimulus of the innate immune system” and that an innate-immunity vaccine like Sabin “can provide nonspecific protection against a range of viruses and become effective in hours, not weeks.”

“We propose OPV (Oral Polio Vaccine) because of its availability, simplicity (a tablet), very low cost and decades long safety record… Billions of people have received OPV, including nearly everyone in the U.S. between 1962 and 2000,” he wrote.

“Stimulating the innate immune system with OPV looks like a free and safe option for saving lives while we wait for an effective COVID-19 vaccine,” he concluded.

If the feds want to chase a vaccine option at warp speeds, this is the one they should be pursuing.