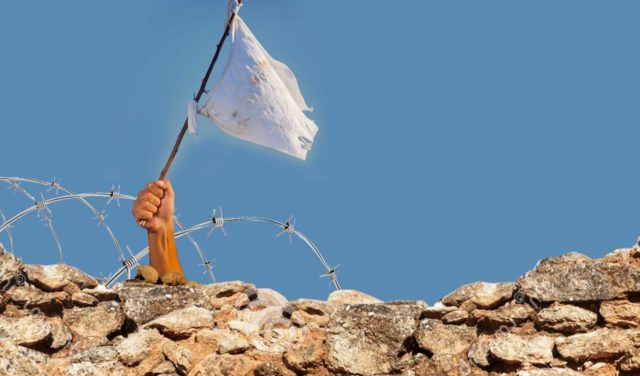 “Today, with the signing of this bill, it is our hope that the oil and gas wars that have enveloped our state are over, and the winner is all of us.” — Gov. Jared Polis

Well, it’s been a couple of months now since Gov. Jared Polis declared a truce with the oil and gas industry with the signing of Senate Bill 181 and a lot has happened since then. In short, the Earth has gotten hotter and closer to passing its point of no return while the oil industry in Colorado and elsewhere moves full speed ahead, increasing its production of the very hydrocarbons that play no small part in the global warming disaster unfolding around us. And it’s only going to get worse as oil production continues to increase.

You think immigration is a tough problem now? Wait until a few million more starving folks displaced by global warming decide that they are coming here whether we like it or not.

You think water’s an issue now? Just wait until global warming has the Colorado River basin down to half its historical flow-rate in the not too distant future. Based on the 1922 Colorado River Compact, when that happens none of the remaining water will belong to Colorado or the states in the upper basin. Zilch. California, Vegas and Phoenix will get it all. And the always shortsighted idea that billionaire impact investors like the Waltons and their pals could save the river while turning a profit will be just another long-gone pipe dream shot down by climate change. Gross Reservoir may have a great big new dam by then, but it won’t have any water.

The point to all this global warming talk is simple: The oil and gas wars aren’t over as our governor hopes. They have yet to begin in earnest.

First let me say that Coloradans are pleased that SB 181 was signed into law by the governor. We now have a little say in preventing oil and gas extraction inside the city limits of our communities and there are possibly other environmental benefits. But that hardly means that the oil and gas war is over.

Our elected leaders seem to think that getting the rigs out of backyards was our only — or at least our biggest — issue with the oil and gas industry? They honestly seem to believe that we are just fine with the world’s most destructive industry so long as its wells are 1,500 feet past the edge of town.

That’s because the vast majority of the people in Colorado actually believe in science. So when our governor and our Boulder-based Colorado House and Senate leaders put together policies that will, in the words of Jeff Robbins, our Polis-appointed COGCC director, allow the oil and gas industry in Colorado to “flourish” and “thrive” in the future, we’re more than disappointed — we’re mad. (Robbins’ flourish and thrive quotes came during an interview with the Colorado Sun.)

As our governor knows all too well, this is not the first time he has declared a truce with the oil and gas industry on our behalf without our permission or support.

Politicians seem to have an innate desire to have it both ways. They always want a solution that makes everybody happy, both voters and donors. But that isn’t possible when it comes to global warming and the oil and gas industry. Those two things are opposites and we have to choose one or the other. Either we start cutting back on the quantity of oil and gas that we produce as quickly as possible, or we continue to encourage extraction in the name of jobs and severance taxes, causing global warming to worsen until it passes the point of no return in approximately 11 years.

At least those are the only two choices for people who believe in science. Politicians apparently believe in a third way based on wishful thinking and can kicking.

Let’s be clear: Any elected official who claims we should fight global warming while simultaneously allowing or even encouraging more oil and gas production is simply a climate change denier wrapped in the rhetoric of environmentalism for the purpose of moving up the ladder of political power. And any environmental organization or paid “activist” who stands with such science-/climate- denying politicians is equally guilty and self-serving.

The oil and gas war may indeed be over for these professional compromisers, but it’s not because the war was won. It’s because they chose to surrender. Fortunately, they are hardly the majority of Colorado citizens, most of whom are deeply committed to fighting global warming and protecting their children’s and grandchildren’s futures.

So what does “flourish” and “thrive” really look like? U.S. oil production is expected to top out at a record 13.4 million barrels per day by the end of this year. The cause for this record amount of production is the shale oil revolution that is currently underway in places like Colorado. According to internal industry analysis, the amount of climate-destroying oil produced in the U.S. and Colorado is only expected to rise in the future.

So no matter what our elected leaders claim; or how many studies they put forward to figure out how to increase electric car use; or how many new environmental units get created within government agencies; or how many plans get hatched to increase the use of renewable energy; or how many oil wells get relocated to 1,500 feet past the edge of town — if we continue to allow the oil and gas industry to “thrive” and “flourish,” all our other global-warming efforts, no matter how sincerely undertaken, will, in the end, be reduced to ineffective political theater.

The industry will never voluntarily stop producing as much oil and gas as it possibly can, and we shouldn’t expect it to. But we should expect exactly that from the elected leaders who gave us SB 181, which, intended or not, gives us the power to do just that. That’s right, the appointees of our governor now have the legal authority to cutback or even halt all oil and gas production in our state.

Prior to SB 181 going into effect, The Oil and Gas Conservation Act, which SB 181 amended, made it illegal to waste oil and gas, and it defined “waste” to include anything restricting the quantity of oil or gas that may be produced by the industry in Colorado. But SB 181 amended the Act so that the definition of waste “does not include the nonproduction of oil and gas from a formation if necessary to protect public health, safety, and welfare, the environment, or wildlife resources as determined by the commission.”

Translation: Let the oil and gas wars begin in earnest.

If global warming is not a threat to public health, safety, welfare and the environment then I don’t know what is. So it seems that we now have the power via SB 181 to halt any and all production of oil and gas within Colorado without regard to economic impacts in the fight against global warming so long as the COGCC is willing to go along with the effort. In other words, we now have the legal right to stop any and all oil and gas extraction provided our governor is willing to appoint COGCC commissioners who are willing to enforce production limits to fight global warming. That is the good news.

The bad news is that our current governor, House and Senate leaders and newly appointed COGCC director have already demonstrated they have no intention of using SB 181 or any other democratic remedy to do the one thing that could actually save the planet before it’s too late, namely reduce the quantity of oil and gas produced in Colorado and set that example for the rest of the world by leaving it in the ground.

My fear is that the best we’ll get from our can-kicking elected leaders will be some toothless promises to someday study the possibility of maybe cutting back on future, potential blah blah blah… but they won’t lift a finger to actually cut or halt oil production between now and the time it’s too late for our kids.

The path forward for the rest of us is clear and it needs to make the earlier skirmishes in the oil and gas war look like practice. We need to lawyer up in a big way to take advantage of all the potential changes offered via SB 181. And we need to dedicate ourselves to electing people with the backbone to stand up to the oil and gas industry, women and men who don’t think that cutting backroom deals that appear environmentally sound while in reality help the industry to flourish, thrive and increase production is acceptable.

I for one have had my fill of billionaire-funded, pragmatic, compromising Democrats who talk a good game while always leaving us with more Earth-destroying hydrocarbons than we had before they took office.

No one can sign a truce for you that will ultimately destroy your children’s future.

Sorry, Governor, while we appreciate many of the efforts you are making, they are not nearly enough to end the oil and gas war. Our battle for the planet’s survival continues.

For more evidence that the oil and gas war is just heating up,  check out these additional stories from this week’s Boulder Weekly: