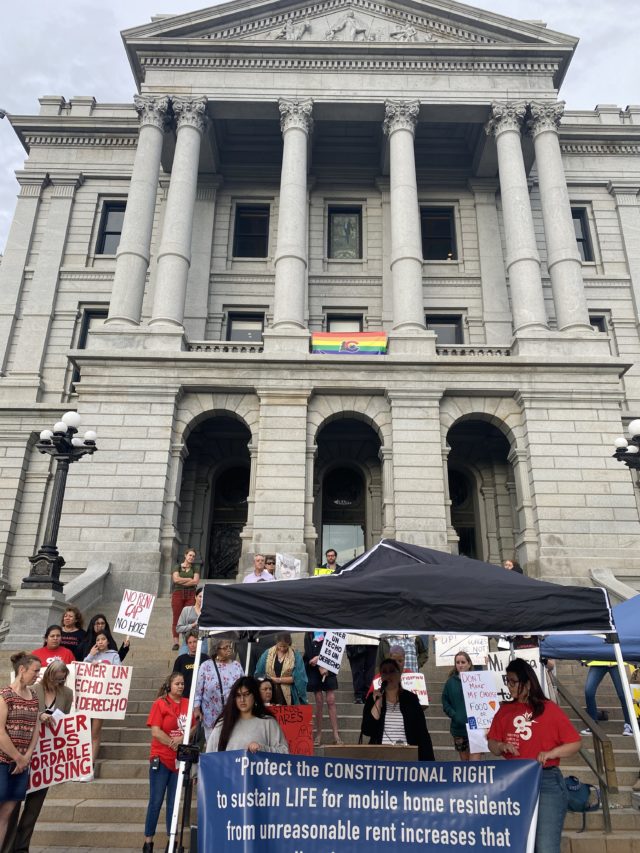 Since the beginning of this column in March, I’ve focused on rent control—then I pivoted, uncovering the broader history of tenant activism in Boulder. But in the last month there’ve been two public rallies bringing attention to the issue of rent stabilization/control.

The first rally happened on June 30 on the State Capitol steps in Denver, with some righteous pushback against Gov. Jared Polis because of his veto threat over a provision to limit rent increases on mobile home lots.

And then, Sunday, July 3, Colorado Homes for All coalition had a rally at the State Capitol to get local officials to put pressure on state legislators to reverse the 41-year-old ban on rent control. In record heat, tenants told their stories of crippling and unjustified rent increases and their choice to pay or leave.

So, it’s time to return to a deeper look into the most effective approach there is for curbing out-of-control rents (notice I didn’t say “solution”). Even rent control proponents acknowledge its limitations in a free market system. Rent control was meant to limit future rent increases—it generally doesn’t have the ability to bring rents back to more reasonable levels.

My first five columns (March-May 2022) dealt with some of the background of rent control policies, politics and myths. As I mentioned in those earlier columns, the Renters Rights Project (RRP), in early 1981, started a petition to get “moderate rent control” on the Boulder ballot. It immediately ignited massive and predictable opposition from landlords and their allies, resulting in a statewide ban on rent control a few months later.

So, what is moderate rent control? When many people think of rent control, they think of New York City or what was termed “restrictive” rent control. This kind of rent control, developed shortly after WWI, was needed given the acute housing shortage and rent gouging that had developed. Rent strikes throughout NYC led to the Emergency Rent Laws of 1920. Those laws expired after nine years, but rent control came back during WWII, and stayed, in one form or another to this day.

It was a rent cap with few exceptions, and that was somewhat inflexible. Over the last 100 years, the NYC style evolved into a more flexible system, and more than one million rental units are now under some kind of rent control/stabilization there, resulting in more housing security for several million residents.

To the dismay of the rental industrial complex, rent control is working in almost 200 communities other than NYC.

Under the moderate rent control that RRP had proposed in 1981, rents would have been frozen for several months to prevent preemptive increases. They would then be rolled back to 1977 levels and subsequently adjusted upwards for inflation, and reasonable rates of return would be permitted. New construction and complexes of three units or less would have been exempt.

An elected rent control board would enforce the local ordinance, set base rents, allow exemptions and determine and permit reasonable expenses, such as increased property taxes, repairs, maintenance, improvements, etc.

Boulder’s moderate rent control also proposed including a probation against arbitrary eviction, knowing that landlords would attempt to kick out tenants to raise the rents, or who reported violations.

Those were the major elements, although there were a number of other provisions to preclude loopholes. The petition was four pages in length (without the signature pages), resulting from extensive research of other cities with rent control, along with legal research into local and state laws in Colorado.

RRP member Chris Goodwin made the argument in a 1981 Daily Camera article that rents should be regulated as a public utility much the way utilities and telephone rates.

There are other forms of moderate rent control in effect today throughout the country, but this one was tailored to the Boulder rental market.

We’ll never know what voters would have done, since the petition never made it to the ballot because the Colorado legislature quickly moved to crush Boulder’s attempt to stem unreasonable profiteering, and banned rent control statewide. The message from the state legislature was clear: We will not allow any city—even home-rule cities—to regulate their skyrocketing rental markets. Much of today’s legislature (and certainly Gov. Polis) seems to still believe that.