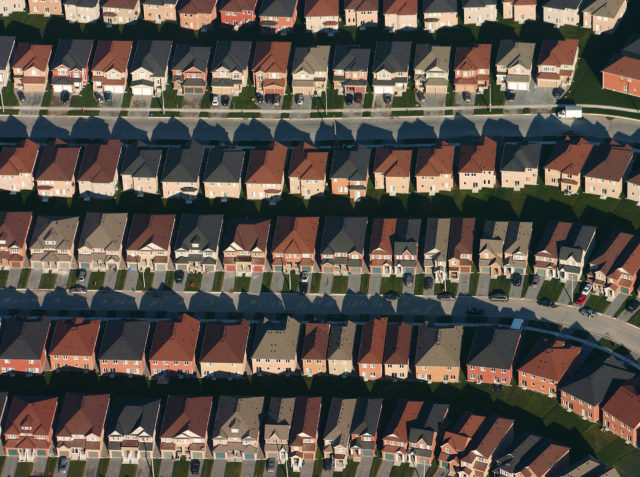 If you spend more than 30% of your income on housing, the federal government says you are “cost-burdened.” You are paying too much. According to a recent report by the National Low Income Housing Coalition, there isn’t one U.S. state, metropolitan area or county where a full-time minimum wage worker can afford to rent a two-bedroom apartment. Only in 28 of the nation’s counties can such a worker afford a one-bedroom.

Bryce Covert, writing in The Nation, notes, “It may feel as though the country has always failed to offer an affordable home to everyone who needs one. But in 1960, only about a quarter of renters spent more than 30 % of their income on housing. In 1970, a 300,000-unit surplus of affordable rental homes meant that nearly every American could find a place to live.”

Nan Roman, president of the National Alliance to End Homelessness, told Covert “When there was an adequate supply of housing for low-income people, we did not have widespread homelessness in this country. ” The Rev. David Bloom, an advocate for the homeless for decades, agreed. He noted that “the word ‘homelessness’ was relatively unknown” at the time.

In 1973, President Richard Nixon declared a moratorium on the construction of all federally subsidized housing. During congressional hearings on the move, Senator William Proxmire (D-Wisconsin) protested, “The historic pledge of a decent home in a suitable environment for all Americans has been abandoned.”

A year later, Congress created Section 8 vouchers, a federal subsidy to private landlords. There has never been enough money to meet the demand. These days, just one in four poor families who are eligible actually receive the vouchers. This is a means-tested program for the poorest so many who can’t afford housing are excluded as well.

When Ronald Reagan became president, things got worse. The Department of Housing and Urban Development’s budget was cut from $83.6 billion in 1976 to less than $40 billion in 1982. Federal spending on housing assistance suffered a 50% cut during the same period. Developers were given tax credits to build affordable housing. Reagan told Good Morning America in 1984 that homeless people were homeless “by choice.”

Something has got to give. Rents are too damn high. It is getting harder to become a homeowner. The homeless population keeps growing.

In the last few years, a national movement for affordable housing has been slowly emerging. In September, People’s Action presented a plan called “A National Homes Guarantee.”

People’s Action (PA) is a progressive, multiracial, working-class coalition of more than a million people and 48 member organizations in 30 states. They fight for racial, gender, climate and economic justice. They offer a transformative approach away from our country’s current private market-dominated system of providing basic shelter.

The plan calls for an investment of $150 billion in existing public housing infrastructure over the next 5 years, a national tenants bill of rights, universal rent control, the construction of 12 million “social housing” units (publicly owned and operated apartments rented at below market rates), reparations to people of color and native communities for racist land-use policies, taxes to discourage land speculation and the establishment of a People’s Housing Commission. The goals and standards of the Green New Deal would be embedded at every level.

The report says these structural reforms are designed to “ensure all people living in the United States have safe, accessible, sustainable, and permanently affordable housing.”

This movement is facing a tough fight with the developers and real estate industry. But it also has to contend with the YIMBYs (Yes In My Backyard) who say they are allies. Karen Narefsky reported in Jacobin that the Massachusetts Democratic Party in 2017 “almost passed a party platform that included support for rent control, stronger tenant protections, inclusionary zoning policies and land trusts. Local progressives, including delegates from Our Revolution MA, submitted a resolution that garnered wide backing and almost passed.”

But the pro-tenant measure was defeated because it called for removing existing language in the platform that advocated building market-rate housing. Delegates aligned with the national YIMBY movement united with anti-rent control Democrats to kill it.

Narefsky writes, “While the final platform did include tepid language about protecting tenants (and landlords) from discrimination, it also endorsed ‘efforts at all levels of government to encourage the production of new rental units,’ including ‘public and private sector partnerships.’”

YIMBYs offer a trickle-down free market solution to making housing affordable. Deregulate and “build, baby, build” all kinds of housing. Bring down the cost of housing through increased density. The movement was started in the San Francisco Bay Area and an investigation by In These Times revealed that it has been funded by real-estate and big-tech interests.

The first national YIMBY conference was held in Boulder in 2016,  hosted by Better Boulder. As the Boulder City Council race heats up, this debate will be crucial.