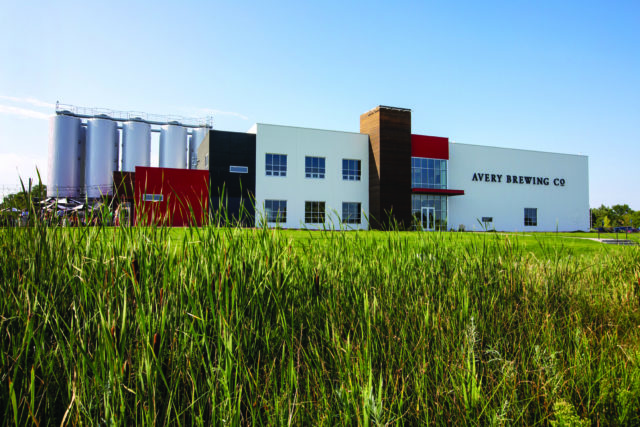 Adam Avery had no interest in being a lawyer. It was as simple as that.

“There’s no way you’re going to enjoy this,” his friends told him.

So, he quit. Now what? He loved rock climbing, and he loved homebrewing, but surely there wasn’t much of a future in either, was there?

It was the early 1990s, and the scene looked a little different. Boulder was shaggier then, and the brewing industry could barely even be called that. The first brewery in the county, Boulder Brewing Company, was started in a goat shed northwest of Longmont by two University of Colorado Boulder professors back in 1979. Five years later, and renamed Boulder Beer Company, it relocated to a castle-like structure on the east side of town and went through a rollercoaster of ups and downs. More than once, it looked like it was going to close up shop, but the brewery managed to make it to 1990; that’s when Frank and Gina Day came knocking. That same year, the Days partnered with Thomas A. Moxcey to open the Walnut Brewery, Boulder’s first brewpub. The following year, the Walnut’s general manager, George Hanna, left to open the Oasis Brewer Pub on Canyon Boulevard. And a little over a year after that, Gordon Knight, a Vietnam vet with a purple heart, opened High Country Brewery on Arapahoe Avenue.

Then came the fifth: Avery Brewing Company, incorporated on Sept. 1, 1993, in a 2,000-square-foot warehouse on Arapahoe Avenue nicknamed “The Alley.”

Fast-forward 27 years and Avery Brewing is but one of 22 breweries, brewpubs and taprooms that call Boulder home. And not only is Avery Brewing the largest of the bunch — producing nearly 55,000 barrels of beer a year — it’s the last one standing from those first five: Boulder Beer closed on Jan. 18, 2020; the Walnut on June 4, 2017; Oasis on March 1, 2002; and Knight moved High Country to Estes Park in 1994 and changed the name to Estes Park Brewing.

It takes more than good business sense to survive three decades in the brewing industry. It takes innovation, experimentation and the willingness to fall flat on your face.

Avery’s done it all. From aggressive hopping to barrel-aging, from beastly ales with ABVs soaring high into the double digits to easy sippers perfect for a pour on top of a peak, Avery Brewing has spent the last 27 years following one simple rule: “Beer first. The rest will follow.”

Adam Avery was born in Macomb, Illinois, raised in Decatur and moved to Colorado in 1984. It didn’t take long for the mountains to work their magic, and Avery started climbing. Hobby led to profession, and Avery started working at Eastern Mountain Sports while studying for the LSATs. He passed and was accepted into the University of Denver’s Sturm Law School, but it didn’t seem right. His friends had started practicing and waved him off.

But Avery knew he couldn’t work for Eastern Mountain Sports forever. What was a 27-year-old staring down the barrel of a quarter-life crisis to do?

The answer came while at a Super Bowl party. His former manager brought some bottles of homebrew and gave one to Avery. It was a full-bodied brown ale, and it stirred up something in Avery’s mind. The next day, Avery went out and bought a homebrew kit.

Avery was infatuated, and became the type of homebrewer who had “three batches going at once.” He was brewing so much, he gave beer away at his climbing site in Rifle to anyone who would take it.

“At the same time, the spring of ’93, my Dad (Larry Avery) took early retirement,” Avery told Boulder Weekly in 2019.

Larry was a runner, but in the early ’90s, Boulder wasn’t a running mecca. Boulder should have a proper running store, Larry resolved, and moved west to follow his bliss.

But, finding a storefront for a running shop was easier said than done, and Larry’s business plan stalled. His son had a suggestion: Let’s start a brewery. He had passion and some investors; Larry had a business partner and some capital.

“It took about nine years to actually turn a profit,” Avery said. “It wasn’t like we were hemorrhaging cash, but there were three years where Dad and I didn’t pay ourselves.”

Avery Brewing opened its doors in early ’94, right as the market was booming, but it took a while for the small family operation to find footing. Their initial line-up — RedPoint Ale, Out of Bounds Stout and Ellie’s Brown Ale — wasn’t catching on, despite Out of Bounds taking home gold at the ’94 Great American Beer Festival.

“The beers at the time that were killing it were Fat Tire, 90 Shilling, Sawtooth,” Avery said. “Beers like that. … Good-drinking beers.”

Avery’s amber was a big amber, “more like an IPA,” in his estimation. Ten years later, a brewery couldn’t survive without an IPA on its tap list. But when Avery started selling his in ’96, bartenders couldn’t give it away. Bitter was not something beer drinkers in the mid-’90s wanted, and bartenders called up Avery and told him to come back and pick the kegs up.

It almost sunk him.

Avery doubled down and staked the brewery’s future on a big, burly red ale loaded with hops. They named it Hog Heaven, after a bike race Larry came across while reading the paper. It took off like a rocket.

One big beer led to another. Next came The Reverend, a Belgian-style quadrupel ale. Then Salvation: a Belgian-style golden ale. Along with Hog, the three formed Avery’s “Holy Trinity” of ales.

“I wanted to do those big beers, and I wanted to experiment,” Avery said. “That was ‘my’ piece, of the craft industry.”

Avery’s line of big beers caught fire and exploded production: From 3,000 barrels in 1999 to 15,000 barrels in 2009. Throughout those years, Avery found himself on the “tip of the spear” and he continued to push the brewery to try new things.

“I ran the company for a long time as a hobby gone berserk,” Avery said. “And, literally, doing everything I wanted. And then finding people who were like-minded.”

Andy Parker was one of the like-minded. A homebrewer since he was 19, Parker brewed his way across the country and back. Parker joined Avery in 2002, and one year later stared a barrel program, back when the notion of barrel-aging a beer was a curiosity at best. Then, in 2004, came The Beast — the first installment of “The Demons of Ale” series — weighing in at a whopping 15% alcohol by volume. Mephistopheles’ Stout followed in 2005, and Samael’s Ale (a barleywine) concluded the triumvirate in 2006. Ten years prior, any beer north of 8% alcohol was considered “big.” By the mid-2000s, Avery had three pushing past 15%, a healthy roster of ales nipping at their heels, and a devout following of drinkers eager to explore what beer could be.

“Beer is just a part of this artisanal movement,” Avery said. “I felt my job was to bring wine and spirits people into the beer fold. … [P]roducing super flavor-forward beers that kind of hit the upper edge of what ‘beer’ should be.”

The Brett Pack brings Belgium back

In 2006, Sam Calagione of Delaware’s Dogfish Head Craft Brewery was at work on a book, Extreme Homebrewing: An Introduction to Brewing Craft Beer at Home, when it became clear that to understand extreme brewing, a trip was in order. “I knew this book would be incomplete without a pilgrimage to the motherland of extreme brewing,” Calagione wrote in The New Brewer.

Avery returned from the beer-soaked exploration with a thirst for sour. He started experimenting with a koelschip (pronounced “coolship,” a large shallow tub in which hot wort is cooled and spontaneously fermented with air-borne microorganisms), mimicking what he found at famed Brussels brewery Brasserie Cantillon, and using wine barrels inoculated with Brettanomyces yeast harvested from Drie Fonteinen.

The experiments were paying off, but The Alley could no longer contain them. From the original 2,000 square feet Avery procured in 1993, the brewery had piecemealed the surrounding warehouse spaces throughout the years, finally capping out at 20,000 square feet.

It was time to move. In September 2011, Avery submitted plans for a 72,000-square-foot brewery on five and a half acres of land in Gunbarrel. The facility would have everything Avery had on Arapahoe, just bigger and better: 67,000 square feet with exterior space allowing them to expand to 95,000.

Avery Brewing’s sparkling new $30 million Gunbarrel brewery opened on Feb. 16, 2015, and ushered in a new era of brewing in Boulder. Sporting an 85-barrel brewhouse inside a state-of-the-art facility with four 720-barrel fermenters looming over the complex, Avery was now capable of producing 350,000 barrels of beer a year. As Avery explained, the technological leap from his kitchen as a homebrewer to a seven-barrel brewhouse in The Alley was enormous, but nothing like the leap to the facility in Gunbarrel: “One-hundred-fold technological jump,” he said. “Back in the alley, there was a lot of beer going down the drain.”

Not anymore. In 2017, Avery hit a high-water mark with 63,250 barrels of beer. That same year, Avery sold a 30% stake in the brewery to Spain’s Mahou-San Miguel, and then another 40% in 2019 (Avery and Larry own the remaining 30%). The sales caused rumblings in the craft beer world and took Avery Brewing out of the Brewers Association’s “craft” category, but it also allowed the brewery to pay down its debt, focus on new beers and new beer styles, and further expand its distribution. Now you can find Avery beers in 39 states, the District of Columbia, Japan and Sweden. Three decades ago, Avery was giving away his homebrew in the trailhead parking lots of Rifle, Colorado. Today, that beer is served 5,000 miles away and ordered in a different language. Not too shabby for a guy who didn’t want to be a lawyer.