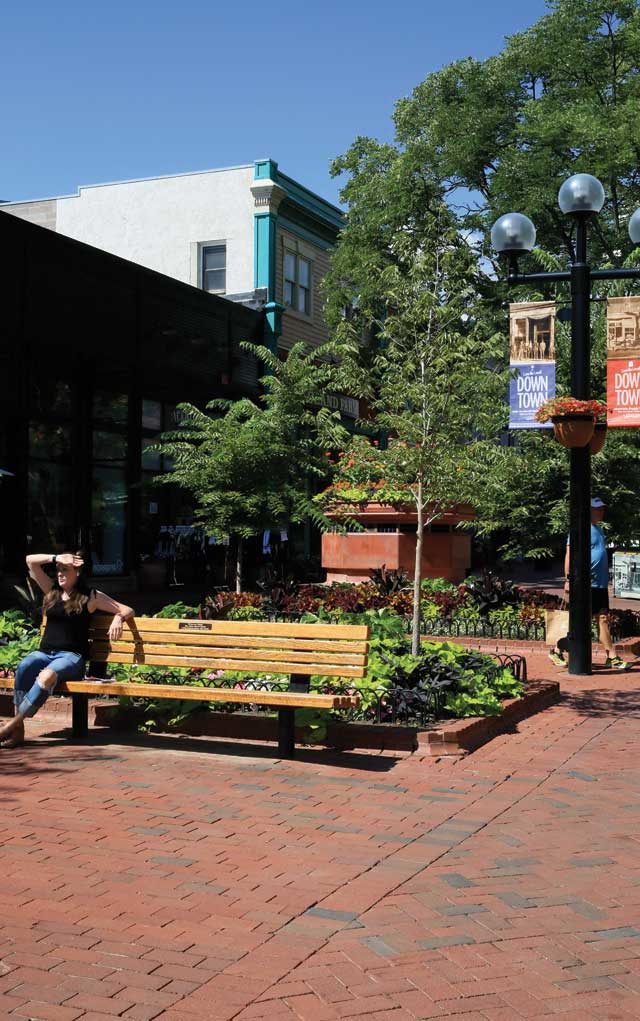 It doesn’t matter if you’re visiting from Denver or Dushanbe, Tajikistan, a visit to Boulder isn’t complete without a stroll down the city’s centerpiece: Pearl Street. It’s only a few blocks long, but Pearl’s unique history is made up of hundreds of little-known stories. Here are but six.

1. APRIL 1859
Pearl Street gets its name. Boulder’s main thoroughfare appears named for the first time on a town plat. One month prior, 58 men signed the Articles of Organization of the Boulder City Town Company. Though rumors have suggested that the street was named after a minister’s mother, or the wife of one of the original town organizers, no one knows for certain who Pearl was — or if she ever came to Boulder.

2. 1886
Fonda’s Drug Store at 1235 Pearl St., becomes known as Boulder’s “debating center” because people often talked while standing in the doorway. The owner of the building, George F. Fonda, was a member of the championship Boulder Hose Company, which pulled a 1,175-pound cart and unreeled a 200-foot hose in a record-breaking time of 34 and a half seconds. He also played the tuba in the Boulder Band. Now the building houses the Peppercorn kitchen supply store.

3. FEBRUARY 9, 1932
The Boulder County Courthouse catches fire. The fire began in the clock tower, and high winds quickly spread the flames, causing the roof to cave in. Although the courthouse’s foundation and walls were still standing after the fire, the 50-year-old building was torn down and replaced with today’s courthouse, an Art Deco-style building designed by Glen H. Huntington. Made of buff sandstone, the courthouse’s stepped-back design echoes the flat, angular storefronts that came into style in the 1930s, replacing the intricacies of the Victorian era. The courthouse reopened in 1934 — the same year that the Women’s Relief Corps dedicated a plaque at the front of the building featuring President Abraham Lincoln’s “Gettysburg Address.” The plaque remains to this day.

4. AUGUST 6, 1977
Following a year of construction, the Downtown Boulder Mall opens. One month later, the City Council bans dogs, bicycling, skateboarding and tossing Frisbees on the mall. During construction between 11th and 15th streets, business owners complained of decreased sales and expressed their concerns about the lack of parking. Years later, businesses cited the mall as the reason they succeeded. After the opening of the mall, Richard Foy, co-chair of Communications Arts, Inc. stated that “Pearl Street, once Boulder’s commercial artery, has become its cultural heart and soul.”

5. OCTOBER 1989
An unorganized, spotaneous event, the Halloween Mall Crawl drew tens of thousands of costumed, rowdy locals and tourists alike. In 1989, Boulder police sent 87 officers to attempt to control the crowd, which swelled to over 40,000 people and resulted in upwards of 100 injuries, 37 arrests and $50,000 in property damages. The Mall Crawl was shut down permanently in 1991 and was, eventually, resurrected in 2009 in a much tamer form.

6. 2019
Home to retail stores, businesses and restaurants, buskers — such as fire jugglers, contortionists, escape artists, musicians and the like — and a variety of massage therapists, psychic readers, face painters and henna artists, the Pearl Street Mall continues to be one of Boulder’s largest attractions. An estimated 1.5 million locals and tourists visited the mall in 2018, many of them shopping at the mall’s longest-tenured residents: the Boulder Book Store (1973), El Loro Jewelry and Gifts (1977), Peppercorn (1977) and Pedestrian Shops, which opened its first store in 1969 and was the first retail store to sell Niwot’s own Crocs.