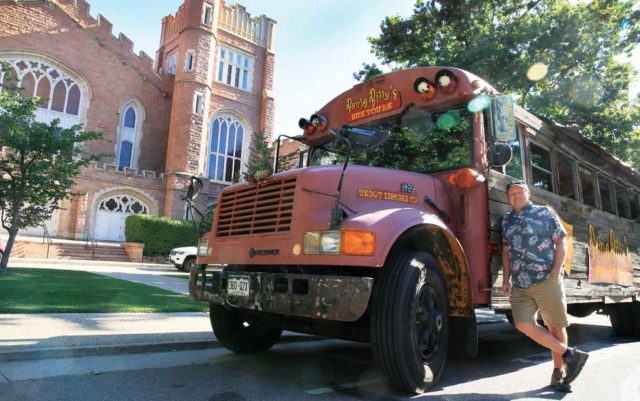 Boulder has secrets. A lot of secrets.

According to legend, Boulder was almost the home of Colorado’s maximum-security prison — Carson City fought hard for the honor; Boulder got the University of Colorado instead. But don’t worry, Boulder still has plenty of blood on its hands: U.S. Army Colonel John Chivington rallied his battalion in Boulder Valley before riding down to Big Sandy Creek and slaughtering Arapahoe and Cheyenne women and children, along with Chief Niwot, on November 29, 1864.

But hey, it’s not all bad! A Boulder courthouse clerk named Clela Rorex issued the first same-sex marriage license in the nation in 1975. There hasn’t been a riot in Boulder since 2002 — when the city outlawed upholstered furniture on front lawns. And Boulder was home to The Temple of Venus, run by one of Colorado’s few black madams, Molly Gordon. Bonus trivia: Gordon was a close personal friend of President Ulysses S. Grant — emphasis on close.

“Isn’t this great?” the Banjo Billy’s Bus tour guide grins from behind the microphone. “It’s like a Disney tour.”

Looking like a school bus had a drunken affair with a hillbilly shack, Banjo Billy’s open-air bus features loveseats, couches and one horse saddle for seats, cup holders fashioned out of cut-up jeans, green astroturf for the flooring, bolts of fabric decorated with mandalas to cover the pitched roof and Christmas lights to tie the room together. Ever seen a “Keep Boulder Weird” bumper sticker? The designer probably had Banjo Billy’s in mind.

It’s quite a sight, and it’s a Boulder staple. New in town? Family visiting? Curious about how the 161-year-old city came to be? Need more puns in your everyday life? Pile into Banjo Billy’s and let them escort you around town. It’s like Disneyland’s Jungle Cruise, only with more death.

“At one time that was the city morgue,” the guide says as the bus rumbles past Salt on Pearl Street. “They’ve been serving up slabs of beef for a while now.”

“When they renovated the building in the early ’90s, they discovered that it was once a house of ill-repute,” she says. “Which was something, considering next door was the police station.”

Further up the road is the Arnett-Fullen House, built 1877 by Will Arnett, “Boulder’s first trust fund baby,” the guide jokes.

The house, a gorgeous example of mixed style: gothic revival, carpenter gothic, second empire and Italianate, is still in excellent condition and features one of Boulder’s oldest cottonwood trees out front. Like the rest of Boulder, the cottonwood is a transplant that refuses to give up its prime real estate.

Oh, and the Arnett-Fullen house is haunted. Hell, practically every building in Boulder is haunted, or, at least, its third floor is. Banjo Billy’s lives to highlight them. They even do a Haunted Boulder tour in October; the material must be endless.

In addition to the Boulder history and haunted tours, Banjo Billy’s also offers a history tour of Denver and brewery tours of Boulder and Denver.

And that’s what makes Banjo Billy’s such an enjoyable jaunt around the town; it’s light and odd but far from sanitized. You learn how Mary Rippon — the first woman to teach at a state university — managed to keep her marriage and child secret from her bosses at CU. “It’s the University of Colorado, but we call it ‘CU’ because we’re dyslexic,” the guide says.

Speaking of CU, why doesn’t David H. Nichol’s name appear on at least one building of the university he helped bring to Boulder? Hint: It involves the Sand Creek Massacre. Some spots just won’t come out no matter how hard you scrub.

Speaking of spots, ask about a certain school logo painted on the Third Flatiron. It’s been there for over 60 years, and people are still debating its origin.

Banjo Billy’s history tours take about 90 minutes and traverse the city from the Hotel Boulderado to Chautauqua and back. A word to the wise: Sit in the front of the bus unless being jostled around is your idea of a good time. If it is, there is a couch in the far back with plenty of tired springs. Then it really will be a lot like a theme park ride.