The lobby of the Museum of Outdoor Arts (MOA) in Englewood is bright with natural light, but a few steps past the ticket counter, inside the museum’s immersive exhibit, Natura Obscura, is a crepuscular woodland of luminescent pinks, purples and blues.

Owls hoot over the sound of running water. Fantastic creatures peak around trees to catch a glimpse of you. Beneath your feet, Mother Nature greets you from the floor, her eyes pupil-less white voids. It’s her third eye that stares at you as she reaches forward with her index fingers and thumbs touching, the universe nestled in the space between her hands.

She’s offering you a chance to see the divine, to pry open your third eye, as you make your way through this surrealist nature exhibition.

“We are all about harnessing art to transform how people look at themselves and the world in some way,” says Eric Jaenike, co-founder and president of Prismajic, the Denver-based event design and production company that teamed up with MOA to create Natura Obscura. The two organizations brought together 30 local artists, builders and other creative-types to fabricate the 5,000-square-foot dream world using traditional art and sculpture combined with virtual, augmented and digital technologies. The result is a fantastical forest adventure that is equal parts sensory playground and meditative space.

“We’re very much not an entertainment company,” Jaenike says of Prismajic. “At least we don’t think of ourselves that way. Yes, this is very entertaining at the visual level, and I think that’s important. You can wrap meaning in fun, but beneath that is what this experience is about.”

Jaenike and his professional partner, Jennifer Mosquera, spent five years learning the ropes of immersive event building for corporate clients (Microsoft, Chase, The Ritz-Carlton) under the name Artistry Events and Design. In early 2017, Jaenike says he and Mosquera felt like they had the experience they needed to follow their own artistic vision, so they sold off all of Artistry’s assets and founded Prismajic. 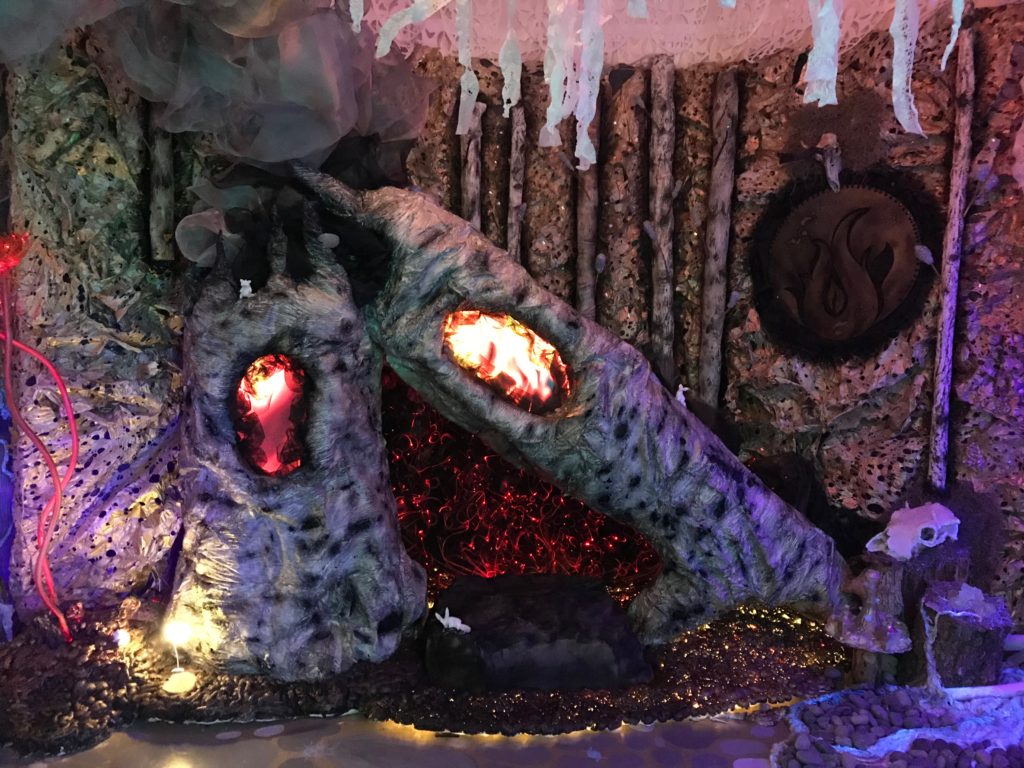 Their collaboration with MOA was just around the corner. MOA was on the hunt for a group they could collaborate with on a nature-themed immersive exhibit. The MOA staff visited Meow Wolf in Santa Fe, and immersive theater events in Denver, like Sweet & Lucky and Broken Bone Bathtub, to form a foundation for the kind of immersive event they wanted to create.

“MOA has always experimented with newer, cutting-edge kind of things,” says Tim Vacca, MOA’s director of programs. “We’ve done a lot of different events and exhibitions in the past that were maybe pushing the boundaries.”

Like Creatura Psychedelica, a pneumatic sculpture installation by San Francisco-based artist Bill Kennedy that spent last summer at Fiddler’s Green. Or MOA’s changing diorama series at Marjorie Park. Or Element House in New Mexico, a home designed to operate off the grid, the structure of which is derived from the Fibonacci sequence.

If you’ve never heard of MOA, Vacca’s not surprised; the organization has “kind of flown under the radar for a while” because most of its programming is free to the community.

“With Meow Wolf happening… well, it’s been happening for a long time,” Vacca says of the emergence of immersive arts experiences like Natura. “Look at Disneyland. We just all love the idea of coming into a space that completely changes your environment.”

When the MOA team visited, Vacca says it was a “perfect fit.”

Prismajic became MOA’s artist-in-residence in the summer of 2018, leading a group of 10 emerging artists — some local, some from out of state — in MOA’s Design and Build program (the rare paid internship that can also earn college credit), which aided in the creation of Natura. MOA brought on three Design and Build program alumni to help with projection, light and interactive pieces, as well as Grammy-winning audio engineer Mickey Houlihan (Racing Extinction, The Cove).

When Jaenike talks about the emergence of immersive art, he prefaces by saying his thoughts dip into the philosophical. The way he sees it, there’s a confluence of societal movements and technological advancements. Younger generations, starting with millenials, are turning away from material possessions in favor of enriching experiences (perhaps a move forced by a changing economy and a less accessible American dream, but that’s another can of worms). Technology evolves at the speed of the internet, and around the globe people are influencing each other — gone are the days when your local community was solely responsible for your view of the world.

Even with the growing wealth gap in the U.S., most people have their basic needs met, which creates room for the appreciation and cultivation of evermore interesting forms of art. Maybe, Jaenike posits, humanity is starting to self-actualize.

“It is all my opinion,” Jaenike says with a laugh. “I mean, I’ve made all this stuff up, so it may be totally wrong, but it’s just what I’ve seen.”

But Natura is evidence that Prismajic is interested in creating an immersive artistic space that allows for introspection. Sure, patrons are armed with a blacklight flashlight to hunt out secret messages, but those messages ask us who we are in relation to the rest of the natural world. Yes, there’s a CGI Yeti that watches over you as you move through the exhibit, but there’s symbology in the Yeti’s Japanese name, Shiki, which means “four seasons.”

Natura uses symbolism and mythologies to celebrate the wisdom of the natural world and explore human consciousness.

It’s also just plain fun. How deep you go is your choice.

“As adults, our lives, they are so frenetic and there’s very little meditative time,” Jaenike says. “We wanted this experience to be sort of meditative. It gives us a chance to breathe. It allows you to open yourself to the experience in there.”

And it seems like people are interested; Vacca says MOA had its first-ever sold out weekend after the opening of Natura Obscura.

You might want to get your tickets in advance.